The Lunara series follows the crew of the Protector as they fight for the freedom of the beloved lunar colony, Lunara. When the Martian governments want his best friends, Seth and Chloe, for medical experiments and an evil force attacks the Lunara, Parker McCloud goes to Mars to hunt down the truth about why his friends are being targeted and to what end the perpetrators will go. With the help of Gwen Arwell, crewmember and daughter of one of the government leaders, and his captain, Eamonn Dalton, it isn’t long before the crew is split by evidence that both governments are involved and it pits Gwen Arwell against her father, Seth and Chloe against each other, and Eamonn Dalton against the crew, leaving Parker McCloud to decide between duty and the safety of the friends and his colony, Lunara.

The Lunara series was created by me, Wyatt Davenport, looking for a space adventure like Star Wars, but set in our solar system. With two books in the series published and three more on the way, this series is just beginning to deliver a new generation of Sci Fi.

bookishardour.com has called it “engrossing and entertaining”, as well as “full of intrigue and action.”

Visit www.lunaraseries.com for more information on the series.

Visit buy.lunaraseries.com for an eBook or paperback copy of the first two books in the series, Lunara: Seth and Chloe and Lunara: Gwen and Eamonn. 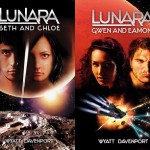