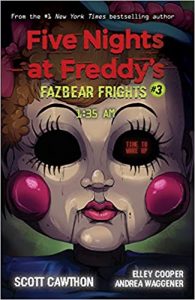 Another book, another frightening Fazbear Frights. But this one is a little different. Until now, my opinions have been all over the place, but 1:35 A.M. has finally cemented for me the appeal of this series and what can be done within its bounds. That might be because this one deals with more adult characters and expands the limits of the stories available. It’s a different sort of book and there’s a lot to talk about, so let’s begin.

This story is a game-changer. Other stories have dealt with creeping dread and psychological horror, but “1:35 A.M.” is the purest example within Fazbear Frights so far. The pacing is fantastic, dodging the problem a lot of these stories have where they take forever to get to the horror elements. Here, the themes of paranoia and loss mount in tandem with us understanding more and more about the victim, and it culminates in a simple and yet horrific outcome. It also continues the frequent themes of financial stress and innocent choices having drastic consequences. Even if you read nothing else in this book series, or don’t care enough about FNAF to seek out tie-in media, I can recommend “1:35 A.M.” to anyone who loves horror.

If you have no idea what happens in Sister Location, this story will be confusing and bizarre to you. However, if you do know what happens in Sister Location, then the twist is easy to guess. The internet spoiled me, though, so I’m perhaps too biased to judge. Regardless, even if a reader can guess, the way it’s handled works to instill a particular style of body horror.

It’s also just good character work. Our main character is sympathetic if sometimes a little annoying. Some of his choices exist to make the story work. There are multiple points where the ending could have been averted if he communicated with the right people. But then we would have missed out on the second most disturbing way to die in the series. Falling only behind the still nightmarish To Be Beautiful.

This story is notable for its ending above all. I avoid seeing spoilers when I’m reviewing things, but that ending has tempted me multiple times to find an explanation. Without knowing the grand plan, I would label the twist as unnecessary. The story plays out logically without it. It’s a classic horror drama with themes of guilt and anger.

But, despite a classic premise, it’s one of the most daring stories in the series. This marks the first time a child dies on the page—even if it’s not permanent. Not a cutaway, not an implication, but a bloody death. It’s even further made me think these books are not meant for kids. It’s a morbid scene and is described with a lot of disturbing details. I’m all for strong horror, but it might be too much.

And that’s 1:35 A.M.. It’s brutal, sickening, and full of solid tension. It’s a good book as itself, ignoring its fandom connections. The prose is solid throughout. The plotlines are interesting and varied. It’s got the pacing I want from a short story collection and none of the weird deviations. If the proceeding books in Fazbear Frights keep up this skill level, then it will be an absolute treat to review them.