It’s finally time for Bruce Campbell to return, and he does it so, so well.

Campbell returns as the great Ash Williams from the Sam Raimi specialty, The Evil Dead series in the new Starz show Ash vs. Evil Dead. The premiere landed on Halloween night and is briefly available to be viewed for free on Starz website here. The episode, “El Jefe”, shows us what Ash has been up to for the last couple of decades.

When we meet up with the one-handed man we see him getting ready for what appears to be a frequent routine. He psyches himself up, heads to a bar right before it closes and wheels a sob story about his missing right hand. A woman falls for previously mentioned sob story and obliges Ash by “laying with him” in the women’s bathroom. Viewers are aware this happens often because when Ash arrives home he sees drugs he wasn’t aware of. He picks up the baggy and remembers a foggy time where in his high times he recited the Necronomicon to a girl who was interested in poetry. 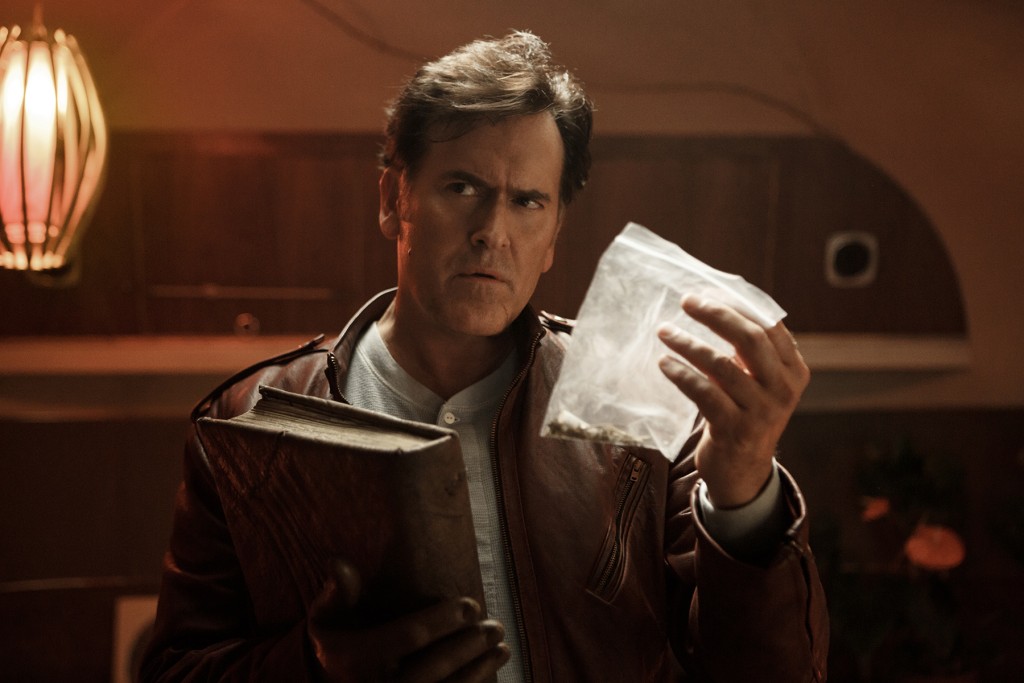 Jill Marie Jones plays Michigan State Police Officer Amanda Fisher who witnesses what the Book of Dead unleashes. After a gory battle with demonic forces, Fisher’s partner is killed and she is dismissed from the police force and now sees distorted demon faces in everyday life, like Ash is starting to. A mysterious woman in a diner, played by Lucy Lawless, tells her that maybe she’s actually seeing real demons before she leaves mysteriously.

For a pilot, it does everything right. We’re taken with Ash even though we shouldn’t be. Campbell is simply the best, even if he is kind of an ass***e. He’s the hero no matter how hard he tries to fight against it. The title of the show makes it clear that he will be taking on the powers he has hilariously unleashed. Thankfully the Starz Network allows the kind of gore that the franchise has become known for. Some of the effects feel cartoonish, but most are a wonderful blend of comedic and creepy. The addition of Fisher will need to be fleshed out, but so far it works. I have confidence that under Raimi’s vision the first season will be ten episodes of blood-stained, riotous fun.

If you enjoyed Carly’s evil, you can find the rest of her work right HERE on Sci-Fi Bloggers. You can also follow her on Twitter @MrsCarlyRodgers.