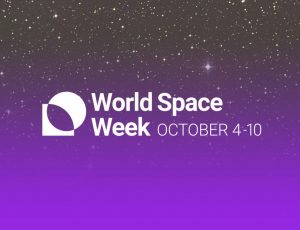 Space Is Still Calling Out For Humanity

When young, did you dream of space? See the footage of our first steps on the moon’s surface and imagine yourself taking those same steps? Wondered about not only if aliens exist, but what they might be like?

Space travel has been a factor in our planet’s development for decades. The challenges and dangers and majesty of space have been driving forces for inventions and progress for as long as we’d decided we were going to go.

And we need to celebrate and encourage that mindset.

Through Space, We Can Improve Our Own Earth

This year, and every year, World Space Week happens from October 4th-10th, all around the world and in every place it can. It’s an organized effort to show people that, though there are certainly issues on Earth, continuing to pursue the great expanse of space, of improving the related sciences, is still worth our time as a species and will continue to be so for the foreseeable future.

And, even the small bit I’ve seen of this holiday has been both fascinating and fun. Like, when presented with the idea of “space education events,” I’m sure most imagine things for only the die-hard math whizzes and people who can code and build robots—but this is not, and should never be, about elitism.

It’s raising up enthusiasm for a truly massive aspect of what we might be doing in the future.

I don’t know if this is obvious, but Big Bang Theory isn’t wrong about science and technology geniuses being fun, sometimes charming nerds. Though the realities of space travel are not like anything we see in media (except maybe The Martian and very specific things shown in Interstellar), it’s still an incredibly exciting thing and is treated with childlike enthusiasm even by professionals. Planets, star systems, rockets, these are still cool things to adults—maybe more so once the work involved is understood and appreciated.

And, yes, as you are reading this, World Space Week for this year is over—but its message will remain. And there’s no reason not to prepare for the next year, or simply practice its purpose right now.

Space is always present, waiting for us to see what’s beyond our singular world. What’s out there among the hundreds of thousands of known planets and the billions more beyond.