Horror Is A Difficult Art Form To Create

Coming from a horror writer, perhaps this topic seems a bit self-aggrandizing. And, yeah, perhaps to some degree it is—but I’m not all that good at horror. I’m passably okay at the practice. I know somewhat what I’m doing. And that doesn’t account for individual taste.

But we’re going to even ignore taste, here, and get to the issue: because good horror, scary stick-with-you horror, is not something that’s easy, ever, it seems.

Look at the dearth of horror movies and media that are just not scary. There’s a reason that Stephen King is one of the few truly known horror authors—it’s niche, it’s hard to do well, and it’s often derided by the general population. Jump scares are forgettable, and a creepy aesthetic is not true horror media.

Real Horror Is More Than Just Some Shocks

So why is the real deal so hard? Well, it might be because I’m narrowing my definition to the horror that seeks to leave a sense of dread, and not simply terror. For a recent example, Pennywise may be utterly upsetting when he shifts and lurches and messes with people—but that scene where he’s talking to Georgie, where the threat is so obvious, yet not yet sprung, that’s really frightening.

Things moving quickly into the frame is scary in the same way our ancestors responded to tigers, but it’s not going to stick past the initial shock. You have to target an intrinsic fear, real anxiety, something formless at the back of minds, to do it well. And that’s much harder.

Horror Is Something Intrinsicty Hard To Evoke

The usual shortcut, the first idea to achieve this targeted horror, is to get a specific fear and dial it up to eleven. Any common phobia, or a bunch of them, can be paraded around and with the right camera work, or description, you can stoke it to five million degrees. I’m afraid of heights, and even non-horror movies can get across what vertigo feels like.

The problem, though, is that if you’re scared of spiders, why would you go see a movie that’s just about hammering that phobia? I can’t speak for all horror fans but being scared for fun and knowingly traumatizing oneself on the one thing you can’t handle are wildly different activities.

So: formless fear, general unease, the uncomfortableness of existence, is the ticket to mass-market appeal. Psychological Horror is a whole genre that attacks the idea of perception and sanity, while Body Horror, the really good kind, attacks our own sense of physical cohesion and sense of self. Zombies and werewolves are just the servers, not the taste. Getting the audience in a mental state of uncertainty and threatened-by-proxy primes an audience for death and gore and jumps to have a lasting effect and not a simple rush.

Horror Is More In The Priming Than The Jolt

And, even if this is done, you can still sometimes lose the horror aspect of it by the wayside because of simply needing the get across what’s even happening. Fear and confusion are linked, yes, but utter confusion isn’t scary. At a certain point an audience member, no matter how much gore just splattered on the screen, is going to fall out of the story to ask, “what am I even looking at here?”

A lot of horrors require a framework. But that’s more of a storytelling point and a tangent of a topic. You must get across why it’s scary to the characters, or there’s no threat.

Now, this is not to say that pulpy horror isn’t its own thing. Some people are only in it for the thrill and that can be quite fun. I consider that a separate subgenre, though a worthwhile one.

So, bringing it back, summing it up, to do horror really well, you need to get across fears that are universal enough to resonate with a lot of people, without instantly rebuffing someone with too specific of fears and only leaving the unafraid. You have to do it in a way that’s coherent as to be understood, but not so obvious that you’ve given away the fakeness of it. You need to do it in a way that conforms to other storytelling needs or else you’re just making the equivalent of searching online for scary pictures and then showing them in a controlled order with sounds.

And once one way works, people will become desensitized to it after a while. So, you can’t even rest on laurels. All good movies are worth celebrating, but good horror is underappreciated for how much skill it really takes. 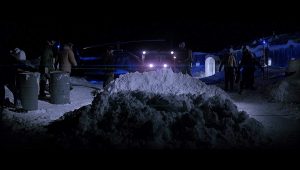