This is a question I have often asked myself, usually when I’m talking with my friends in a bar somewhere.  To the best of my knowledge, we have yet to make significant contact with an alien race.  If we have, it has been kept very closely under wraps.  With Brian Cox postulating that life (as we know it) is highly unlikely to exist elsewhere in the Universe, I am left wondering what an alien would look like?  Would we be able to recognise an alien if we saw one? 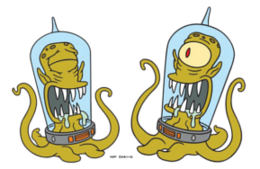 The Universe is a big place, filled with scientific wonders and mysteries yet to be solved.  If we manage not to wipe ourselves out, I strongly believe we will begin to understand more and more about our galaxy and any life within and outside it.  As it stands I believe that any alien contact made on this planet would be accidental.  I can see no logical reason for an alien species to want to come to earth, unless they are very like us—and as I mentioned earlier that is highly unlikely.  We would be so different from what they are, so strange and so primitive.  It is a point of scientific interest that we are the only species on the planet to wage war on our own kind.  Even animals in the wild do not hunt each other to the point of extinction, yet we have the capacity and inclination to do just that.  I realise I’m labelling all humans under the same umbrella—we’re not all coldhearted, sadistically stupid killers—but we have some right nutters in a position to wipe the planet out.  Why on earth would a species capable of traversing vast interstellar distances be at all interested in visiting us? 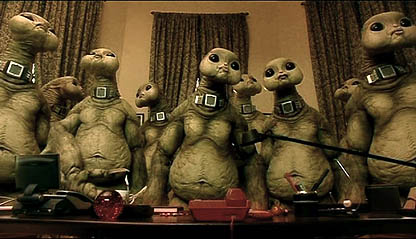 They could invade and take over, but again, what would be the point?  We would be so far below them on the intelligence and existence scale that we would hold no interest.  At worst we would be seen as an unfortunate infection to be eradicated (there’s a scary thought).  So the only logical time I could expect to meet an alien is if it were to accidentally land or crash here in some way.

The chances of an alien inviting me to dinner are so remote that I’d have a better chance at winning the lottery.  That said, if an alien did invite me to dinner I’d probably say yes.  Why?  Like all humans, I’m curious.  I like to meet new people and try new things, so having dinner conversation with an alien would be fascinating.  As long as I’m not part of the menu, I’m game!