A much beloved book from the science fiction community is coming to the big screen, and before you become too skeptical, hear me out, because it sounds like it’s in good hands.

The Martian was first published by its author, Andy Weir, in 2012. Weir is a computer programmer and he made sure all the research behind his debut novel was legitimate. The story takes us on the journey of Mark Watney. Mark is on a month-long mission with NASA and after a disastrous sandstorm he finds that he’s the only person left…on Mars. Mark knows that it will be four years until the next mission to Mars, and he knows his supplies won’t last, so what does he do? He thrives, and Weir’s science intellect was too hard to ignore. The book has now sold publication rights in 21 countries and was widely released by Crown Publishing in 2014.

The story is already a hit, so who does Hollywood get to direct the movie? Ridley Scott! The screenplay was adapted by the brilliant Drew Goddard of Cabin in the Woods fame and will star Matt Damon. The rest of the cast sounds promising too. There’s Interstellar’s Jessica Chastain, Saturday Night Live’s Kristen Wiig, and Captain America: The Winter Soldier’s Sebastien Stan. The film should be released on November 25, 2015.

The film is already promising, and it’s script has already been to space. Literally. Ridley Scott managed to get the first page of Goddard’s original draft, as well as a nice personal drawing of main character Mark and a line from the book reading, “I’m gonna science the shit out of this planet,” onto the maiden voyage of NASA’s Orion. On December 5th, the first page actually flew 5,600 miles above Earth’s surface. If it’s good enough for NASA, then it’s good enough for me. Check it out over on Amazon, iTunes, or any place books are sold. 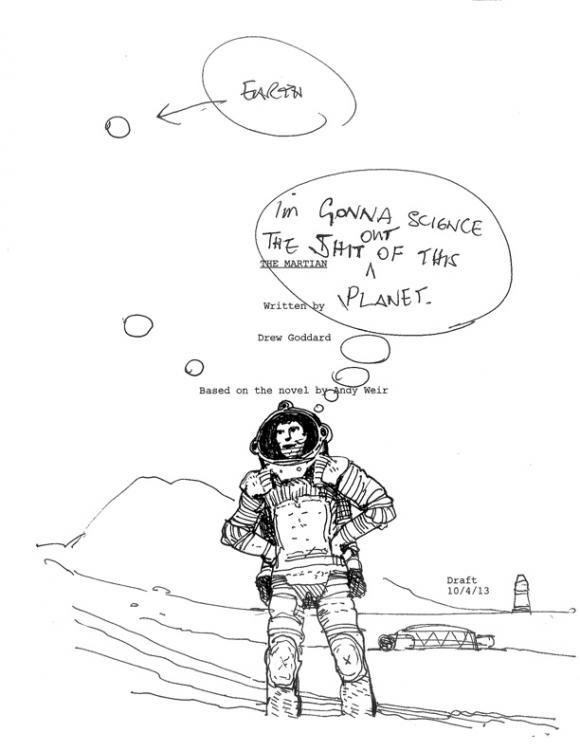 If you enjoyed Carly’s expedition, you can find the rest of her work right HERE on Sci-Fi Bloggers. You can also follow her on Twitter @MrsCarlyRodgers.