A flashback shows Dante (played by Juan Javier Cardenas), a new Whisperer being told by Alpha (played by Samantha Morton) to infiltrate Alexandria. He is ‘rescued’ from walkers and brought into the community, painting graffiti about stopping the Whisperers to cause friction, poisoning the water and murdering Siddiq’s (played by Avi Nash) sick patient and blaming it on her illness.

Rosita (played by Christian Serratos) comes looking for Siddiq moments after Dante killed him, he nearly kills Rosita, but she overpowers him before stopping a reanimated Siddiq from eating their baby. The next day, Gamma (played by Thora Birch) asks Aaron (played by Ross Marquand) about her sister’s baby and offers information in exchange for seeing him. She takes off her mask and reveals her real name ‘Mary’. Dante is beaten and locked up but not before taunting the others about how they’ll eventually crumble under the weight of fear and paranoia. Aaron returns saying Mary told him where Alpha’s horde is, Daryl (played by Norman Reedus) is wary of trusting a Whisperer but agrees to check it out. Michonne (played by Danai Gurira) and Judith (played by Cailey Fleming) check out a local library at Luke’s (played by Dan Fogler) suggestion. He gets attacked by a walker and saved by a man (played by Kevin Carroll) who runs off, Michonne gets a message about what happened at Alexandria but first head to Oceanside. 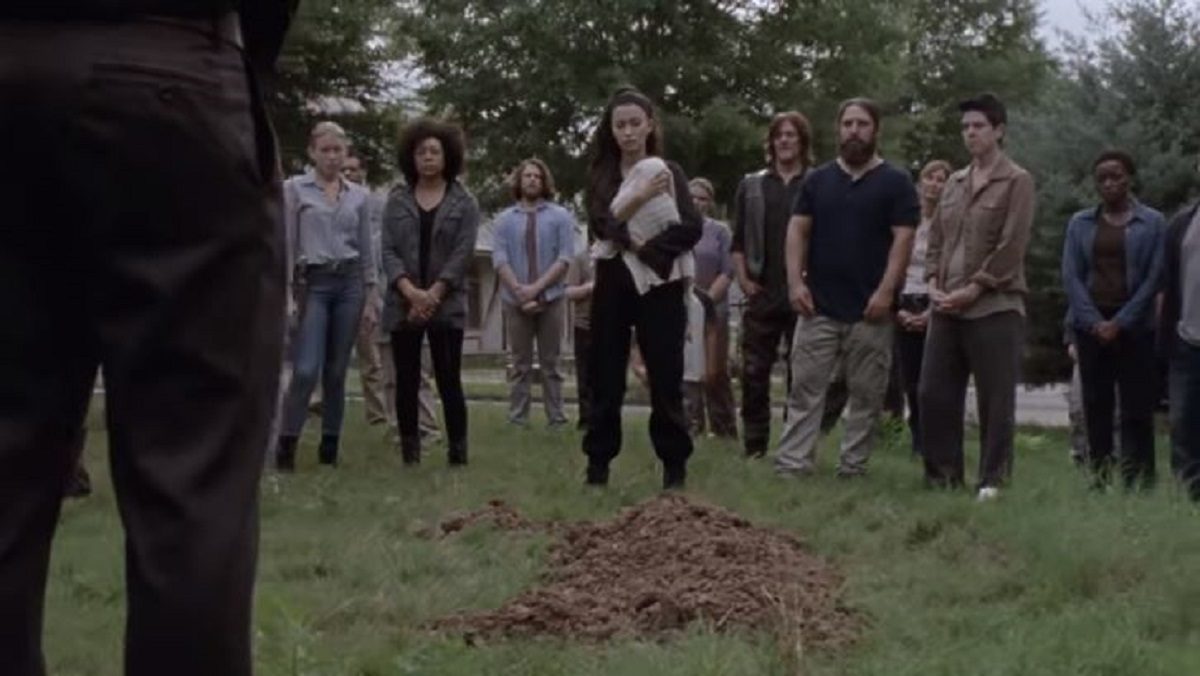 That was a great opening, we fully explored Dante’s past while tying up story threads like the graffiti and had an intense fight all before the opening credits. Although everyone is devastated at Siddiq’s death it mostly rests on Rosita for obvious reasons, and like I’ve said he’s wasn’t a character I felt he was someone I and the audience wouldn’t miss much. But that all went to hell not just when he was caught, but when Dante laid out his entire plan; they won’t destroy themselves if you say that was your plan. Gamma/Mary has decided to take an interest in her nephew now that Saint Alpha’s lies have been exposed, but so far, no regret over murdering her sister. A trip to the library must be like Disneyland to these people; no phones or Netflix you’d want to read almost anything to pass each day. The guy that saved him was gone so fast he didn’t even hear Dan say thank you, he’s probably long gone (but if you’ve watched TV long enough you know he isn’t).

Siddiq is given a funeral and Rosita reflects that she feels more responsible for her own life now that it would make her baby an orphan. In Oceanside, the man who rescued Luke is captured stealing a sail, he claims he just wants to get home, but a large horde of walkers appear before they can question him. Gabriel (played by Seth Gilliam) questions Dante in his cell to see if anything about his past was true, in a rage over Siddiq’s murder Gabriel stabs Dante to death. Daryl, Carol (played by Melissa McBride), and Aaron meet with others from Hilltop to scout the location of the herd. Daryl confronts Carol over her reckless behavior to take down Alpha and encourages her to open up to him more. Back in Oceanside, the man has been captured and interrogated by Michonne. After some coaxing the man reveals he has a family on a naval base and wanted a boat to get back to them but Michonne decides they can help each other. Michonne thinks they can find weapons big enough to destroy Alpha’s herd and plans to go with him to try and bring them back, although nervous Judith convinces her it’s the right thing. 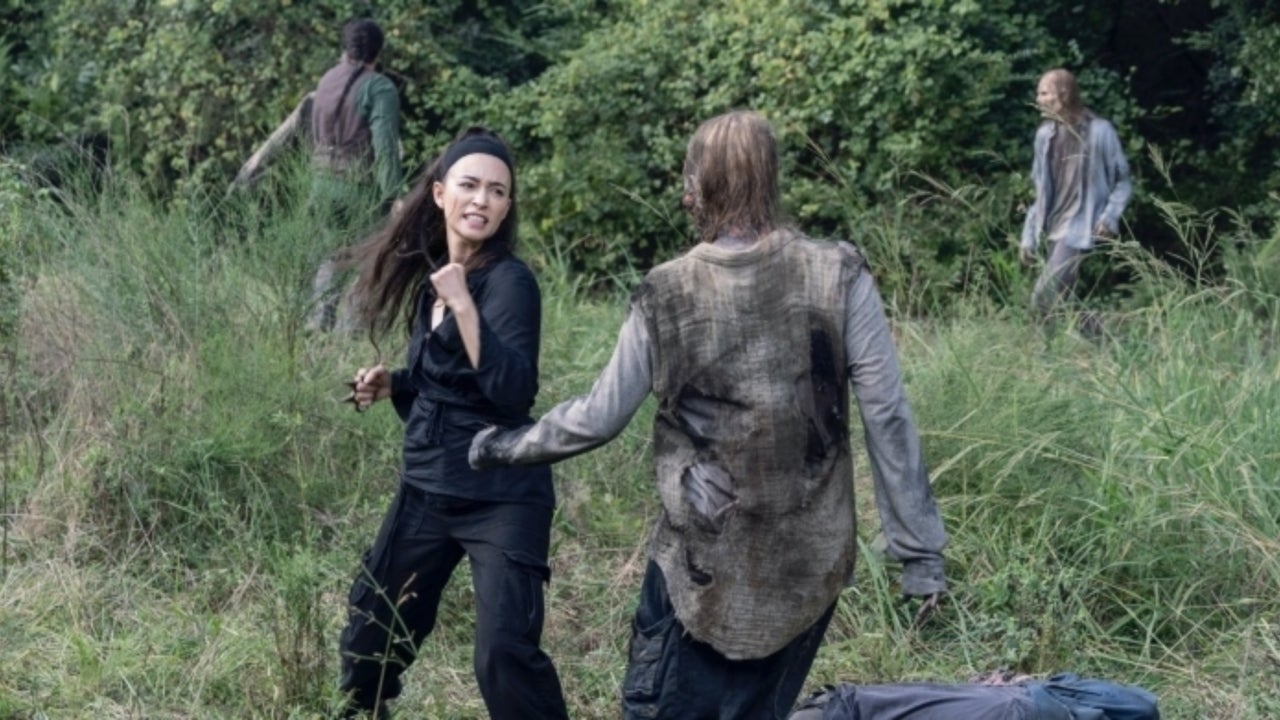 Working through her grief.

I don’t have kids, but I understand Rosita’s fear of leaving her daughter nobody to raise her, it’s a very humanizing moment. I also liked Daryl trying to connect with Carol, but she’s a fighter at heart and once she’s set on something it’s not that easy to make her back down. Gabriel was very fond of Siddiq it appears (makes sense given their blended family) and went full beast mode on Dante. The mystery man shows up again in Oceanside and of course with the Dante situation nobody trusts him especially when walkers just happen to arrive. Of course, he happens to live with his family on a naval base, which in theory would rid them all of Alpha’s horde. Given that Michonne just earlier in the day was prepared to kill him it makes no sense that she would volunteer to go alone with this man on a boat. With the news that Danai Gurira is leaving the show I thought for a moment this was a clumsy way of writing the character off. But she’d still have to bring the weapons back and really that can’t be long enough to write her out for a season or two.

Daryl is furious when they reach the site Mary said and don’t find the herd although Aaron is positive Mary wasn’t lying. Michonne tells the man he can have a boat if she can take weapons from their island and bring the boat back to Oceanside, he agrees and introduces himself as Virgil. After saying goodbye to Judith, they set sail. Alpha spots Carol and the group and Carol takes off after her, the group chase after her but Daryl gets separated. He goes into a cave and falls down a ravine; he winds up with the others surrounded by Alpha’s horde.

Michonne sets sail on the high seas but seriously they couldn’t give her a bigger boat? That thing could barely fit the two of them how is she supposed to transport weapons? Alpha’s smile basically broadcasted trap; I get that Carol’s obsessed with taking her down but she’s smarter than that. But on the bright side they did find the horde, the negative being they’re trapped in a creepy cave with them. This could be where Gamma/Mary becomes useful, but we’ll have to wait until after the holidays, if anything ask Santa to make sure you’re favorite character doesn’t get devoured.

“No one is actually kind. We are selfish. We are brutal. Come on, even seeing all of those heads on spikes didn’t teach you what people are?”

Negan (played by Jeffrey Dean Morgan) joined the Whisperers but there was no follow up on that, what the hell?

“I suppose you’d like me to never trust anyone again.” “It’s a meaningless idea.”

I’m curious how Alpha would release the horde since they look packed in that cave.