An injured Rosita (played by Christian Serratos) is chased by the whispering walkers and collapses. Carol (played by Melissa McBride) visits Daryl’s (played by Norman Reedus) camp where his only company is a dog; she worries that he isn’t eating. Michonne (played by Danai Gurira) takes Magna (played by Nadia Hilker) and her group to Hilltop for shelter although she hasn’t been for a long time.

Jesus (played by Tom Payne) reads a letter from Maggie (played by Lauren Cohan) who’s living elsewhere and deals with problems as the newly elected leader but he clearly doesn’t enjoy the position and hopes for Maggie’s return. Carol asks Daryl to Hilltop with her and Henry (played by Matt Lintz) to watch over Henry for her as Carol can’t stay at Hilltop. Daryl refuses and says Henry needs to learn the hard way how the world works.

Michonne leads Magna and her group to their old camp which was ravaged by walkers, Magna becomes emotional after finding clothes that belonged to someone who died. Michonne refuses to give them their weapons and decides to head back; Magna is both furious and suspicious about Michonne’s refusal to go to Hilltop. However the others want the safety of Hilltop and decide to trust Michonne. Aaron (played by Ross Marquand) and Jesus meet for a secret picnic due to the falling out among the communities. Jesus hopes an upcoming fair at the Kingdom can help reunite them. They find Rosita collapsed by a tree, she left Eugene (played by Josh McDermitt) in a barn for safety and they take her to Hilltop as walkers close in. 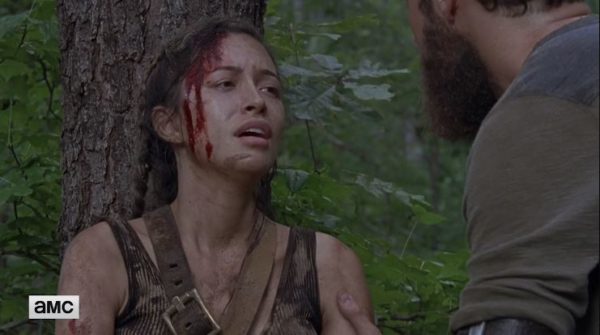 That has to hurt.

Ever since the second time jump there’s been a lot to catch up on, primarily how and why the communities drifted apart. But even as we learn the depths of the rift what happened to Rosita and Eugene will likely bring them together anyway so it’ll be moot. The exit of Maggie’s character had been known for a while but the way she was written off feels very abrupt, there wasn’t any set up she’s just gone. The upside is it gives more screen time to Jesus who despite having been on the show a long time never had many major storylines. We’re slowly getting to know Magna and the others but so far she’s the one who stands out the most, or really at all. As the leader it makes sense we’d get to know her first but since they’re all sticking around I want to know more about them outside of being Magna’s people. Carol asking Daryl to watch Henry is basically an excuse to get him out of his self-imposed exile, this will mean seeing a lot more of Daryl and that’s always a good thing.

That night Daryl confesses to have been looking for Rick (played by Andrew Lincoln) since they never found his body. He and Henry later save his dog when it gets cornered by walkers, Henry also spots an X scar on Daryl’s back similar to one Michonne has. That night Michonne attacks Luke (played by Dan Fogler) a member of Magna’s group after mistaking a guitar he was repairing for a weapon. Luke has a large collection of instruments he salvaged and considers it an art that shouldn’t die with the world.

Tara (played by Alanna Masterson) chastises Jesus for leaving so much and tells him whether he likes it or not he’s the leader of Hilltop and they need him. The next day Siddiq (played by Avi Nash) tells Michonne to come with them, she refuses worried about what might happen if Maggie sees her but he tells her Maggie’s been gone a long time. They fight off a group of walkers that show up and among them is the man from Magna’s group who recently died, Michonne puts him down when Magna is unable to. 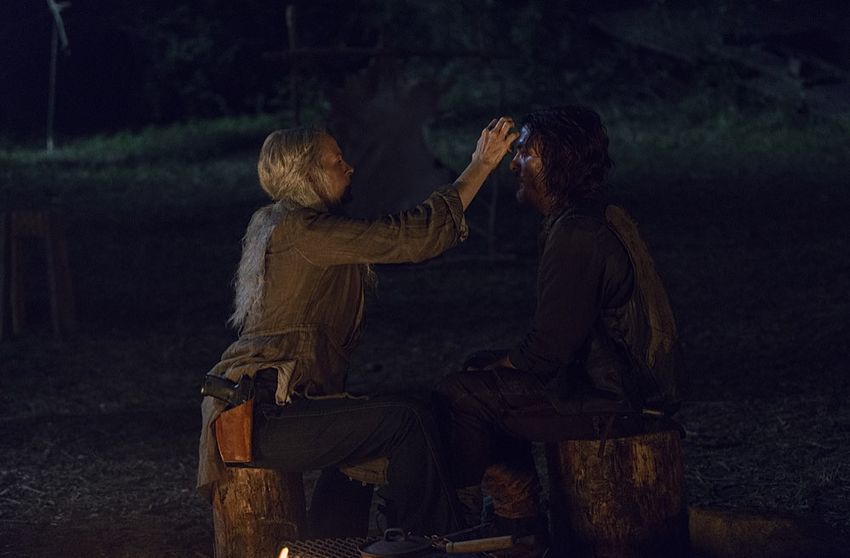 Catching up with old friends.

X marks the spot; this slow buildup to the reveal of the new threat is a little tedious since we already know it’s The Whisperers. Carol tells Daryl he has to let go of his obsession over Rick when really he’s actually on the right track. This seems like setup for Daryl learning the truth about Rick and going to find him because that loose thread has to be addressed at some point before the show finishes. The second half of the episode showed a more vulnerable side to Magna and some background on Luke letting us get to know more of Magna’s group. When we learn there is a rift between Maggie and Michonne it makes the absence of Maggie more palpable because instead of getting to watch this play out we only hear it about through Michonne. But while the second time jump has thrown a lot of new things at us it’ll get easier to adjust as the season moves along, there better not be any significant time shifts for a while though.

Michonne is still unsure about going to Hilltop but when two Hilltop guards arrive and tell her about Rosita she tells them to deliver a message to Alexandria telling them what happened. Carol, Daryl and Henry arrive at Hilltop and when Daryl learns what happened to Rosita he offers to help find Eugene.

As predicted whatever issues Alexandria and all the communities had are getting pushed to the side as they deal with yet another threat. With only one more episode until the midseason finale we should get our formal introduction to The Whisperers next week. That’ll be exciting and set up for a hopefully action packed second half to the season.

Clearly Michonne has trust issues but some of her actions come off as really mean, even petty.

“I know what it’s like to worry about your family. Carry the burden of protecting them. To feel guilt when they suffer.”

Fight training and a picnic; not a typical date but definitely a practical one.