Siddiq (played by Avi Nash) checks on sick patients, giving them all water that he doesn’t know has been tainted by Alpha (played by Samantha Morton) and dealing with hallucinations brought up by his PTSD.

Carol (played by Melissa McBride) and Daryl (played by Norman Reedus) bring the captured Whisperer to Alexandria; Gabriel (played by Seth Gilliam) is furious they put everyone at risk. Carol is ready to torture him but Lydia (played by Cassady McClincy) has the idea of letting him see Alexandria, to shake his loyalty to Alpha by showing him there’s another way to live. Siddiq is told to treat the Whisperer who taunts him about witnessing Alpha kill his friends which leaves Siddiq shaken. Carol brings the Whisperer bread and jams but while he seems to enjoy it, he defiantly spits it in her face, so Carol goes back to her torture plan. Daryl prepares to cut his fingers off as the man defiantly states he will die for Alpha and mentions his belief that Alpha killed Lydia. Carol wants to use Lydia but Daryl refuses to put Lydia through any more pain. 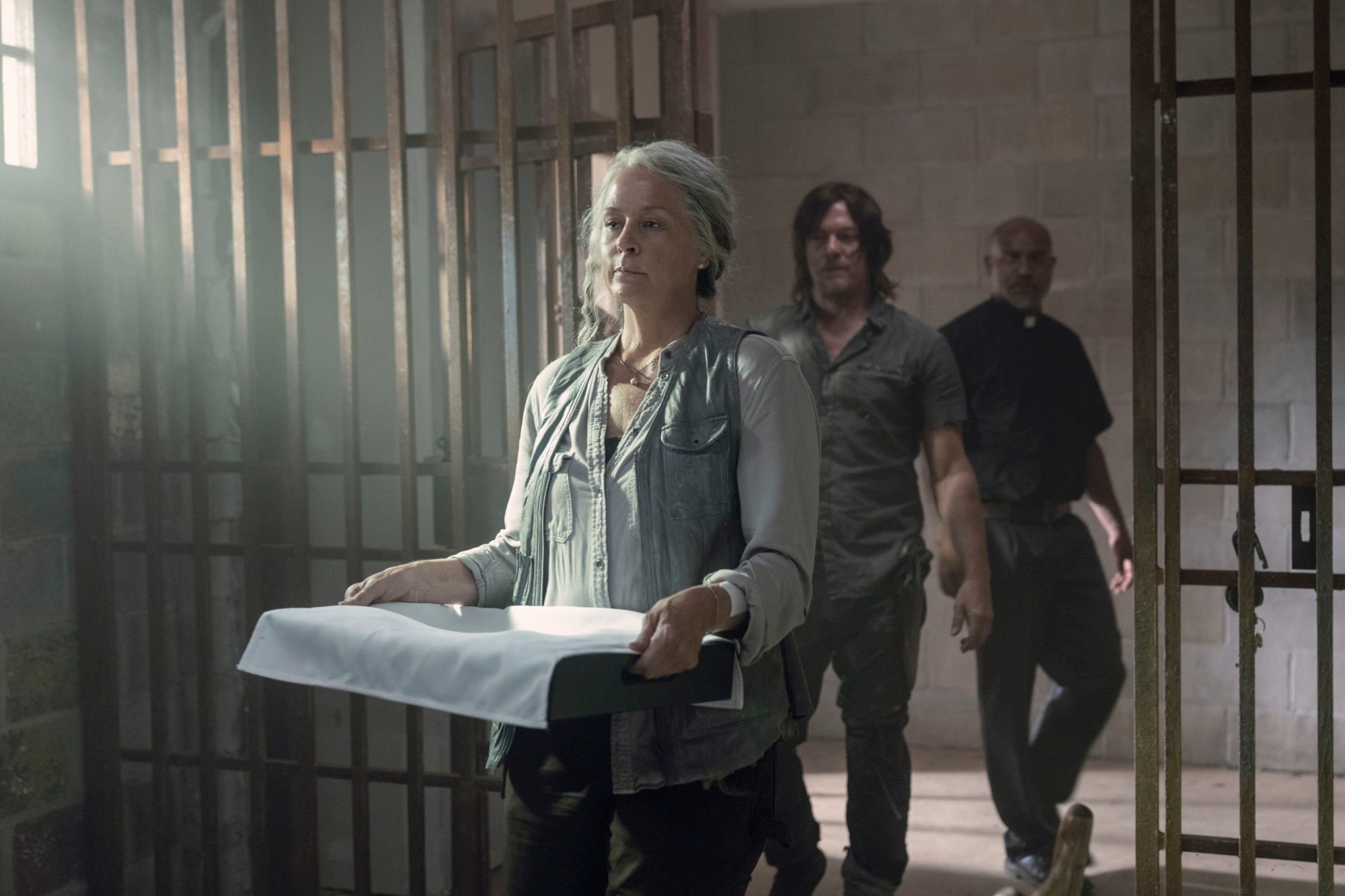 Kill him with kindness.

Siddiq has been dealing with his PTSD all season and now faced with one of the Whisperers who \slaughtered his friends it finally comes to a head. I love how quickly Carol changed gears and went from the wholesome housewife feeding the Whisperer food to stone cold torturer. Trying to show the Whisperer how good their lives are was a solid idea in theory, but aside from the fact that he was fanatically devoted to Alpha why would their way of life tempt him? Even if he wanted to live there, he must have known they would never allow it since he murdered their friends. The Lydia plan was much more viable but why Daryl was so against it I’ll never know. She wasn’t going to be in any danger and I’m sure Lydia would have loved the opportunity to help.

Aaron (played by Ross Marquand) meets with Gamma (played by Thora Birch) who questions him about life in Alexandria. Gamma accidently let’s slip about her sister and Aaron talks about his brother; he knows she wants intel but suggests getting to know each other, and a shaken Gamma leaves. She goes back to Alpha who whips her arm and tells her not to be tempted by Aaron’s ‘lies’. The Whisperer begins to run a fever and coughs blood, eventually dying in Siddiq’s hands. The other doctor Dante (played by Juan Javier Cardenas) had given the Whisperer the wrong medicine but says Siddiq is the one who put it there. Siddiq is pushed over the edge when one of his patients dies and throws himself into the water but is pulled out by Rosita (played by Christian Serratos). He opens up about how hard it’s been reliving Alpha execute everyone and the stress of watching people die from the illness. Rosita assures him that it’s not his fault and he’s doing the best he can, while ruminating over what common factors the sick has, he figures out the water is bad. 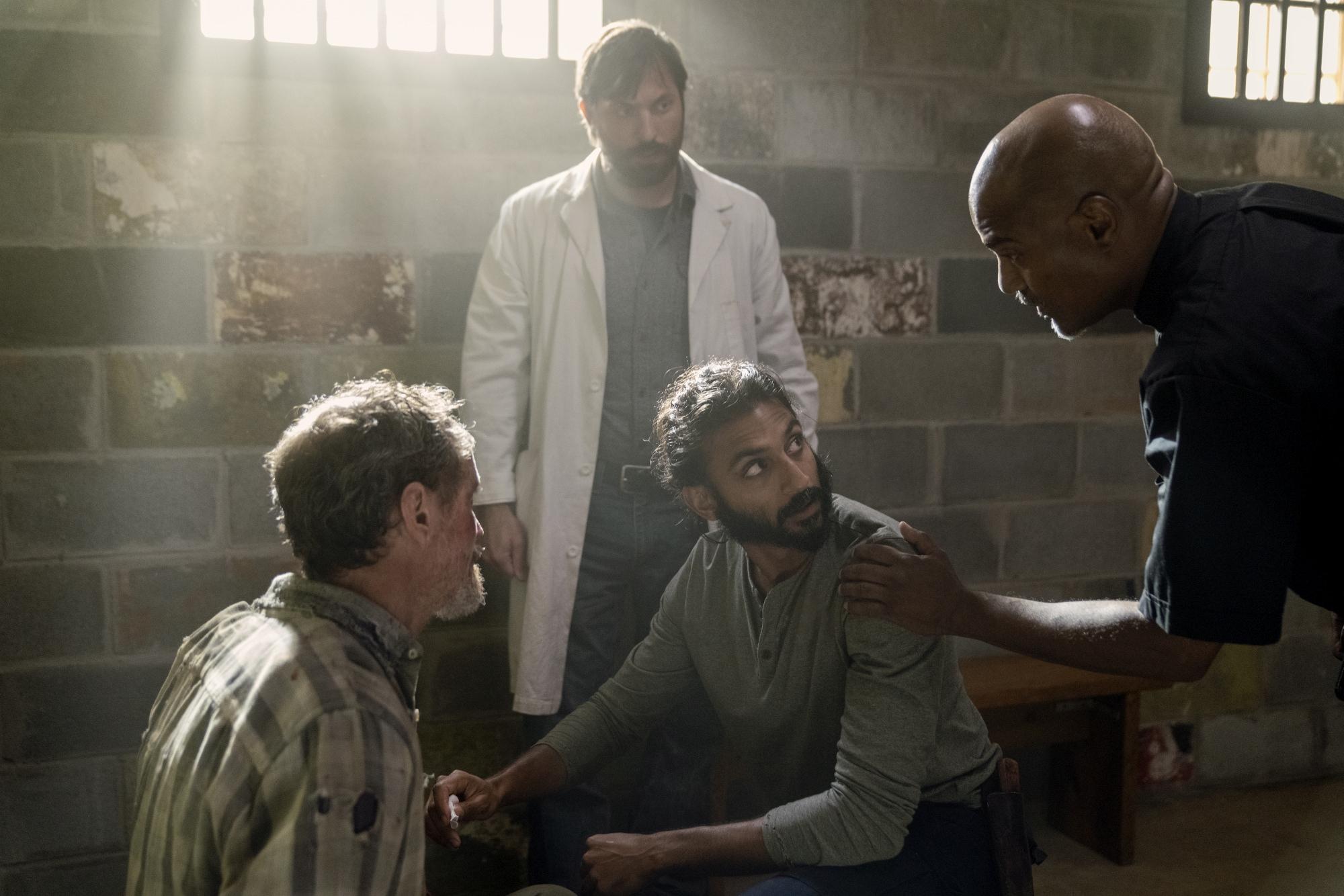 The struggle is real.

Gamma is a very unenthusiastic spy, she mostly asked stuff like how many people it takes to make fresh bread every day. Opening up about her sister clearly made Gamma switch gears from gathering information to starting to genuinely like Aaron. Alpha sensed that and literally whipped Gamma back into shape. If Siddiq hadn’t looked so shocked at what happened with the Whisperer I would have thought he killed him on purpose. But if Siddiq was going to make such a mistake with medication at least it was on a Whisperer prisoner and not an Alexandrian. Opening up to Rosita seemed to help an it led to the realization of the poisoned water. This was a big episode for Siddiq which signals one of two things; that character will have a major shift in their story or they’re about to die. Siddiq was never one of my favorite characters and although this episode warmed up me up to him, I’m not sure I’d miss him if he was gone.

Aaron meets with Gamma who holds him at knifepoint demanding answers, Carol arrives with Lydia; Gamma becomes distraught and runs off breaking down in tears at the betrayal of Alpha. Lydia is furious that Carol used her and decides to leave Alexandria. Dante tries to talk with Siddiq, who has felt an animosity towards Dante and confirm they’re good and assure Siddiq he can count on him as a friend. But while having another flashback Siddiq realizes Dante was a Whisperer present at the massacre. They fight and Dante strangles Siddiq to death but expresses sincere regret that he was forced to kill him.

Gamma’s entire worldview was just shattered so of course she would be upset, but I’m curious why Lydia was so mad. She was going to do the same thing with the captured Whisperer, which makes me wonder why Carol wouldn’t just tell her. Siddiq’s big episode turned out to be his last but man what a way to go. Turned out his PTSD was being triggered because he was constantly around one of his captors. Dante being a Whisperer spy is one of the biggest twists we’ve seen on the show in recent seasons. He genuinely liked Siddiq (still killed him though) so imagine what he’ll do to anyone else who finds out his secret.

“You ignore the truth when it’s staring you in the face. I would never betray Alpha.”

Dante didn’t seem too fazed about Lydia, so maybe only a trusted few know Alpha lied about killing her.

It’s a cruel irony that Siddiq’s inner demons led to his murder.