Michonne (played by Danai Gurira) leads a training mission by the beach, but everyone worries the Whisperers are back when Judith (played by Cailey Fleming) finds walker mask in the sand. She leads a small group to check for clues but Aaron (played by Ross Marquand nearly dies attacking walkers, venting his frustration at having to live in fear of the Whisperers.

The group find a few dead walkers including a skin and realize the Whisperers have been there. Michonne hears Judith telling her little brother the story of how Rick (played by Andrew Lincoln) died a hero but the tender moment is interrupted by a satellite falling from the sky. Rosita (played by Christian Serratos), Eugene (played by Josh McDermitt) and Siddiq (played by Avi Nash) adjust to raising Rosita’s newborn daughter. Siddiq is also dealing the trauma of watching the Whisperers slaughter people from all the communities. Lydia (played by Cassady McClincy) struggles to learn how to read and the revelation that the Whisperers, and possibly her mother Alpha (played by Samantha Morton) are back. She shares the news with Negan (played by Jeffrey Dean Morgan) who is given privileges to work outside of his cell but thinks people will eventually see him as an enemy if the word of the Whisperers possible return spread. he suggests to Gabriel (played by Seth Gilliam) keep it quiet to keep people calm (and himself off their radar). 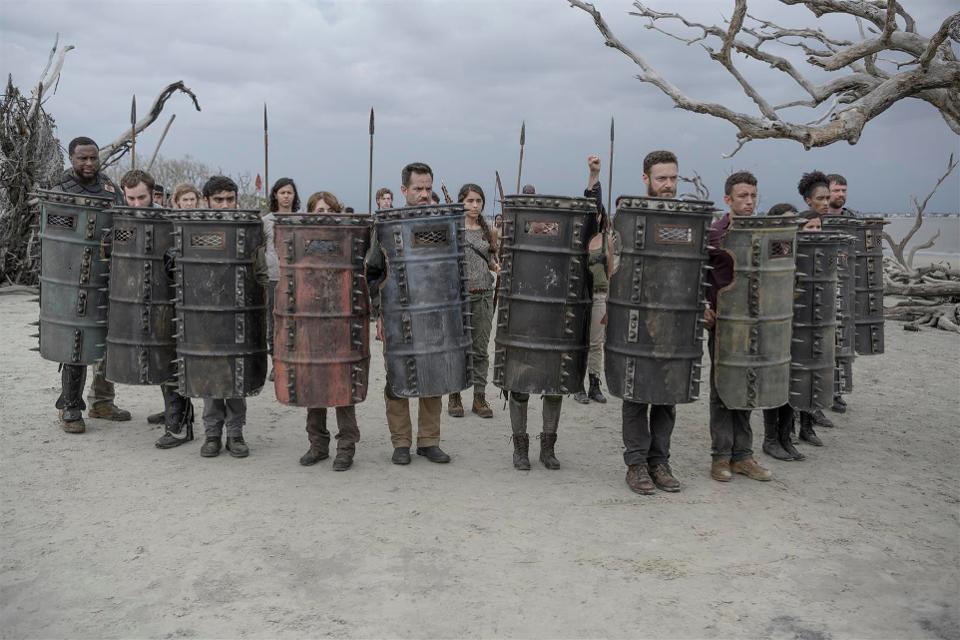 Did anyone else think they were on the wrong channel when the episode opened with the satellite in space? Everyone is basically on pins and needles waiting to see if/when the Whisperers come back and that mask lit the fuse. Negan may have been acting out of self-preservation but there’s no point getting people riled up until they have more proof. People are dealing with all kinds of emotional issues, Lydia trying to fit in with everyone and learning things like how to read are interesting to watch. But who’s interested in seeing how this new blended family is working, or Siddiq struggling with PTSD? Rosita’s pregnancy was never a major story and Siddiq is a tertiary character at best so I’m not too excited to see more of that. Also why do they keep announcing ahead of time when people are leaving the show? This will be Michonne’s last season and that scene with Judith telling the story tells me she’ll be leaving soon to find Rick. That’s not necessarily a bad story for her character but maybe let us find out as the show goes on?

In Oceanside, Connie (played by Lauren Ridloff) consoles her sister Kelly (played by Angel Theory) when the latter realizes she is slowly losing her hearing as well. Connie also begins to form a connection with Daryl (played by Norman Reedus). Carol (played by Melissa McBride) returns from a fishing trip and has an awkward reunion with her ex-husband Ezekiel (played by Khary Payton). When Daryl mentions the mask, she grows tense with the idea of confronting the people who killed her son Henry (played by Matt Lintz) so Daryl takes her out hunting, but they lose a deer when Daryl refuses to cross the border Alpha set up. They muse on the fact that they seem to keep moving from one fight to the next and wonder if that’s all there is. They also see the satellite fall; it lands and causes a forest fire. The group set out that night to put it out despite some misgivings about it being on the other side of the border. 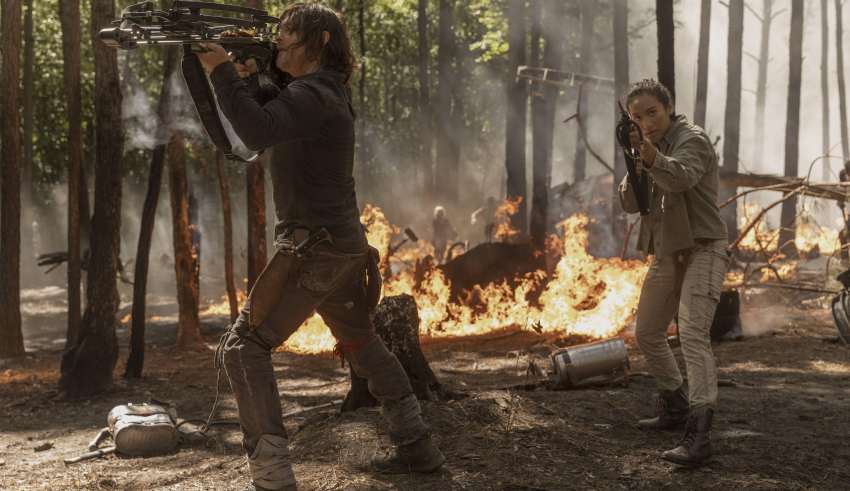 It’s getting hot in here.

After ten season Daryl finally has a love interest (sucks for everyone shipping a Carol-Daryl romance). Connie is one of the more interesting new characters, although that’s not saying much when there’s like 50 to keep track of. I honestly can’t remember if Kelly losing her hearing was brought up before or not because there’s so many characters with something going on. Carol and Ezekiel trying to be around each other while coping with Henry’s death, much more compelling. I’m especially excited to see Carol get back to her roots as a warrior when the grief causes her to seek revenge. It was kind of disappointing that all the buildup with the satellite was just set up for a forest fire. Somehow seeing it in space made me think maybe it would expand the group’s communications. The last season did end with a mystery transition on the radio after all (but so much goes on if you forgot it’s understandable).

They work through the night into the next day with little success, and incoming walkers threaten to overrun the firefighting team. Using the fire as a weapon they manage to kill the walkers and put the fire out. Michonne tries to clear everyone out but Eugene wants to stay and salvage useful material from the satellite. Daryl tries to convince Daryl not to leave again on the boat, after he leaves, she spots Alpha at the bottom of a cliff.

I’m amazed they still haven’t run out of ideas for walker battles; fighting flaming walkers amid a forest fire ranks as one of the best ones. Eugene better make good use of that satellite because now Alpha knows they were on her turf. She didn’t even look mad when she saw Carol more exasperated, like ‘great now I have to start terrorizing some people’.

“We have to keep our cool or they win.”

Michonne mentioned the Whisperers have a ‘nuclear weapon’, I’m assuming it’s their walker camouflage advantage because they can’t have a nuclear bomb…right?

“Nice never got me anywhere, but smart did.”

Daryl and Carol mentioned driving off and leaving everything behind, I would be all for it especially if that became a spin off series.