Carol (played by Melissa McBride) goes out to find and destroy Alpha’s (played by Samantha Morton) horde and Daryl (played by Norman Reedus) tags along. Carol finds a spot where she thinks the Whisperers converge to send walkers to the communities and they stake it out.

Negan (played by Jeffery Dean Morgan) is led blindfolded to the Whisperers camp by Beta (played by Ryan Hurst), he wants to join them, but Beta has reservations. Alpha decides to test Negan to see he can be loyal over Betas’ objections; Beta is tasked with showing Negan how the Whisperers work although Negan’s constant chattering gets on his nerves. Carol and Daryl spot Whisperers gathering up stray walkers, Carol wants to follow them that night over the border although Daryl is worried she just wants to take another shot at Alpha, and that the other communities will be at risk if they’re caught. Eugene (played by Josh McDermitt) talks with a sick Rosita (played by Christian Serratos) over the radio while at Hilltop. She gets worse so Siddiq (played by Avi Nash) takes her to the infirmary and Eugene is disappointed they miss their scheduled call and puts out a message over the open radio. 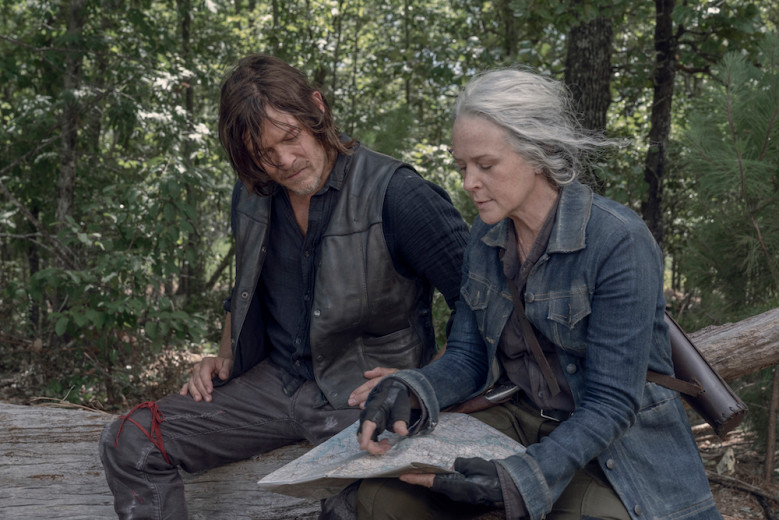 Carol clearly wants to kill Alpha, she barely bothers to cover it up, but she’s already lost so much she doesn’t care. Carol on a mission is always fun to watch if she doesn’t get anyone, most importantly herself killed. Negan joining the Whisperers is thrilling and hilarious, mostly because they’re all about silence and he’s a loudmouth wiseass. Alpha probably likes the idea of Negan joining because Beta has been challenging her so much lately. He’s becoming bolder whereas Negan is both ruthless and desperate since he has nowhere else to go. Rosita’s fever is a perfect visual for how sick I am of the Rosita-Eugene thing; why is this still a storyline it was put to bed already, she is not into him like that. There’s always going to be a story that isn’t the most enjoyable but this one is basically being repeated over and over, and each time is more frustrating than the last.

Beta has digging holes in the woods, skinning walkers for use as masks, and assisting with hunting. Beta doesn’t let Negan eat the pig he helped catch but another Whisperer discretely feeds him. At Hilltop, Eugene makes contact with a woman over the radio; they find out they once went to a fair in the same town and their conversation turns almost flirtatious. The woman is reluctant to share real information she agrees to continue talking regularly over the radio. At Alexandria, Rosita and Siddiq find many others who have also become sick overwhelming the infirmary. Carol and Daryl spy on the Whisperers that night but accidently draw their attention and get separated. Daryl meets up with Carol and finds she has captured a Whisperer to take back for information. Beta leads Negan out into a herd of walkers and while Negan boasts that he will appeal to Alpha to join the Whisperers, Beta leaves him to be devoured by the walkers. 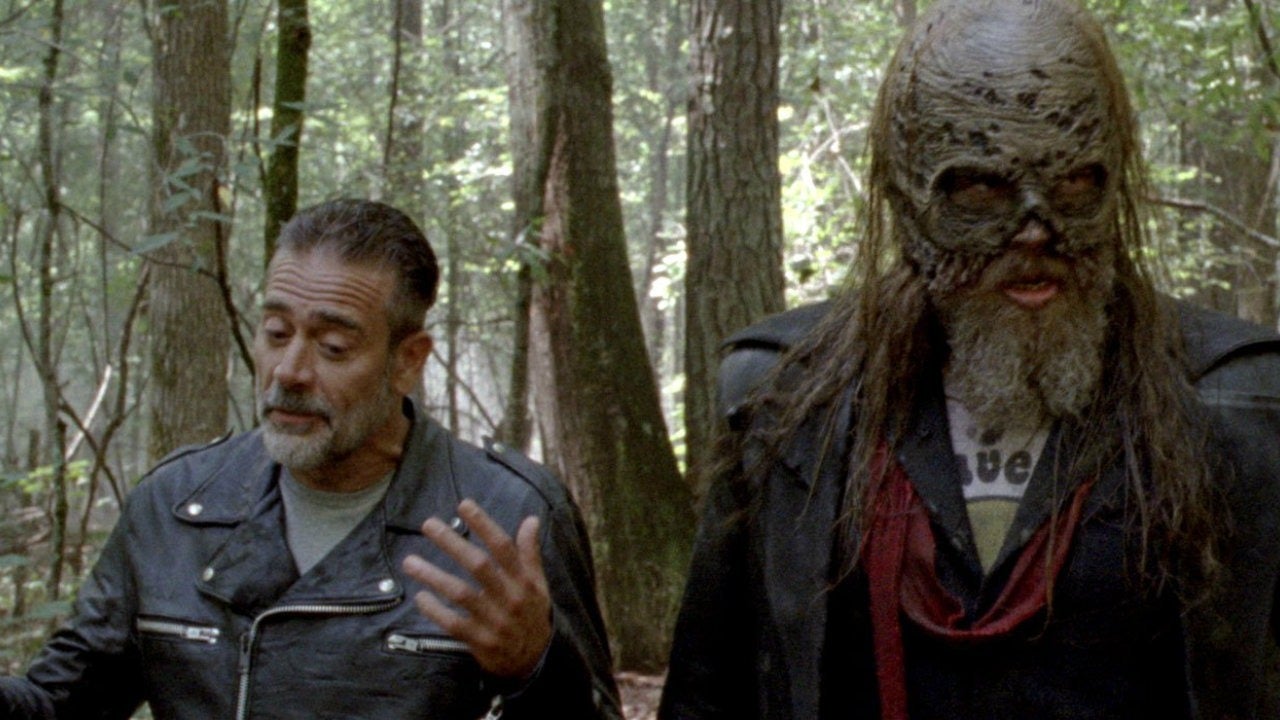 I loved the Whisperer hazing thing, you could see Negan was over it but like any good pledge he wanted in and kept his mouth shut. Beta’s jealously issues reached a peak when he saw that Whisperer feed Negan; bad enough the Alpha is interested in him now the others too. Obviously, it’s not that easy to get rid of Negan and it’s clear these two are going to have it out soon. Alpha’s plan to poison the water is taking effect but will anyone figure out the problem before people start dropping like flies? Eugene has found a long-distance love interested and that’s great I guess, at least he may finally be off Rosita. I’m more interested in who this woman is and what kind of people she’s with rather than if she’ll end up Eugene’s new love interest. Carol wrangled a hostage but Daryl (and I) suspect she really was after Alpha and just took a consolation prize.

The next day Beta reports Negan’s death, but he strolls into the camp covered in blood demanding a place with the Whisperers. He kneels before Alpha and, impressed with him appears to agree to let him join. The only thing better than Negan joining the Whisperers is watching Beta stew in his jealousy. The Whisperers aren’t big enough for both of them and a brutal, bloody fight is imminent.

“How long have you and the boss lady been together? It this like a ‘Beta with Benefits’ situation?”

Siddiq wound up on top of a windmill holding his baby during a PTSD flashback, he may want to consider a babysitter until he gets better.

“Is it finally time for the Beta to become the Alpha?”

Will Negan keep his name or be relegated to being another nameless Whisperer?