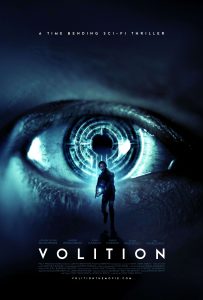 Volition Is Much Smarter Than It Initially Seems

Volition was the movie I didn’t know I needed. It was refreshing and enjoyable to get a film deftly and almost immaculately telling a story of time travel, premonitions, and cause and effect.

Volition doesn’t start off seeming that way, though. At first, it gives off a vaguely ugly, gritty take on a classic sci-fi convention.

And that perception holds for a while. It takes some faith.

But this movie is a magic trick that I had no way of knowing was prepping me to enjoy something excellent.

It’s a movie better streamed because you will actively need to rewind and flit around to catch stuff you didn’t realize was there. And it is worth it to do so. The creators maybe didn’t catch everything, but I didn’t notice a single mistake. This movie script is supremely tightly constructed.

Once Volition Plot Gets Going, Its Soars Forward

But then there is the ending. And the only reason the ending is a little faltering is it breaks rules. There’s a stigma against the ending that, by all the logic I’ve thrown at it, should have been—but was not committed to at some stage.

But enough about the spoilers I’m dancing around. How was the rest of the film?

Well, the acting is mild to solid. The villains have a great dynamic with our hero, which is nice, but there’s nothing spectacular here. The romance aspects are similarly functional. The effects are also just okay.

I’m only thinking of these complaints in retrospect, though. I was too wowed to care much during the viewing. Volition frees itself from all other problems thanks to that twisting of events and timelines.

High-concept movies that focus on their high-concept, even if other things in it suffer, are something worthwhile and I want more like them.