From one of the guys that brought you Lost, an actor who appeared in Lost and one from The Walking Dead comes USA’s Colony.

The show, from showrunner Carlton Cuse, focuses on Will (Josh Holloway) and Katie (Sarah Wayne Callies) and their family in a dystopian Los Angeles. It’s a little hard to follow at first since we only get buzz words like “the Arrival” and “Blocs,” which clearly mean something to the characters but are hard to place puzzle pieces for the audience.

The Arrival refers to the conflict that occurred when extraterrestrial forces successfully invaded Earth. On the ground the extraterrestrials, also known as the Red Hats, Hosts, Raps and probably other pseudonyms to come, wear red and black and patrol the streets within the giant wall that surrounds the city. Horrifying measures are in place like certain diseases banned from being treated, a strictly enforced curfew for all when broken results in immediate death and intrusive interrogations. People are trying to make it by without pissing off the Hosts or their opposition, the Resistance. 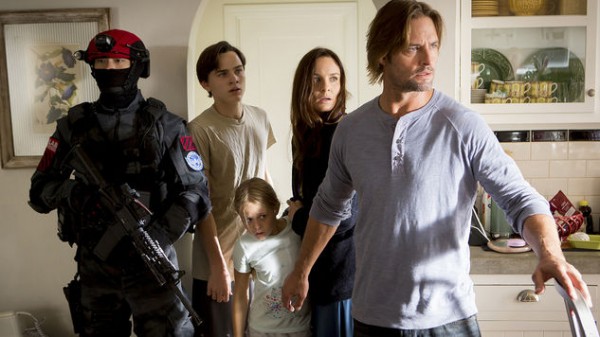 The plot is one we’re sort of familiar with so it’s not exactly fresh and new. The acting does tend to save it as we’re invested in the characters right away. Holloway is an easy screen stealer and Callies is just the right amount of tough and devastating. Their performances save an otherwise bonkers pilot.

For what it lacks in originality Colony makes up for in weird and unnecessary twists. In a supposedly dystopian future kids are allowed to attend school and socialize while their parents, ride bikes on the streets and sit outside at restaurants, but things like insulin can only be acquired through the sketchiest of means? What’s the deal with the “Collaborators?” They’re apparently humans plucked from their own lives at the will of the Hosts and they’re just okay with living in luxury while the rest of human kind suffers greatly? It feels very unbalanced throughout. Also, what’s with all the terms I’m supposed to know? Is Homeland actually Homeland Security, or something else completely? Why Red Hats and Raps? Are they the same thing? Someone needs to do some serious explaining or just cut it all together. If it’s supposed to make viewers feel like a part of the show then it’s failing. It’s just alienating. See what I did there?

You can catch the pilot for Colony on USA’s website here.

If you enjoyed Carly’s colonization, you can find the rest of her work right HERE on Sci-Fi Bloggers. You can also follow her on Twitter @MrsCarlyRodgers.