Yes, a Deadpool movie is finally being made. Maybe you’re sick of hearing about it, but I’ll never get sick of reporting it. I’m already counting down the days until February 12th. I’m not the only one either. Besides millions of fans waiting impatiently, the film’s star, Ryan Reynolds, is also ready for the film to be out. In an interview with HuffPost Entertainment, Reynolds admits that he can’t believe the project is finally going forward. “We can’t believe that somebody cut a check to let us make this movie,” he gushed. “Although they cut a very small check because it doesn’t have the catering budget of most ‘X-Men’ movies, but it’s still cool.” The film has been a major passion project for Reynolds, who first spoke about a standalone film in 2005. So who else will get a piece of this action?

Well, as previously reported, TJ Miller appears in the film, but now, thanks to his personal Twitter, we know more.

So Miller is playing Weasel, Deadpool’s sidekick and possibly only friend. 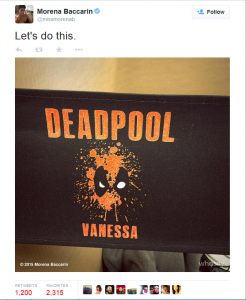 It was also reported in February that MMA fighter and actress Gina Carano would be playing Angel Dust, but the extent of her role is still unknown. More recently, a new addition to the cast was also announced via Twitter. Firefly and Gotham’s Morena Baccarin let the world know that she would be playing Vanessa in the film while showing off a badass chair on the set. The tweet has since been deleted, but now it’s suspected that she will be playing Vanessa Carlysle, also known as Copycat.

Tim Miller’s Deadpool just recently began shooting in Vancouver in late March. Zombieland’s Rhett Reese and Phil Wernick are behind the script. The film will be released on February 12th, 2016 by 20th Century Fox and Marvel Entertainment.

If you enjoyed the Carly’s pool of death (kek), you can find the rest of her work right HERE on Sci-Fi Bloggers. You can also follow her on Twitter @MrsCarlyRodgers.