Barbie (played by Mike Vogel) leads everyone out of the caves and they’re all devastated to still be inside the dome. Although only a day has passed, it feels like a year for everyone and they all remember their time in the alternate reality.

Christine (played by Marg Helgenberger) and Eva (played by Kylie Bunbury) are revealed to be real people, anthropologists who found an egg and were transported to the alternate reality. However, Christine is secretly working with Melanie (played by Grace Cox) and was inside the “queen” cocoon running everything. She and Melanie understand the dome’s agenda because they found eggs and plan to find another way to finish what they started with the pods. Christine continues to pose as a therapist and convinces Eva (who’s unaware of Christine’s real plans) that lying is the simpler route. Jim (played by Dean Norris) tries to rile people up to find and punish Melanie, but Julia (played by Rachel Lefevre) shuts him down by threatening to reveal his latest victims to everyone. He later hears Christine tell Eva to find the only thing that can prove they’re lying about their identities and starts trailing Eva. He breaks into their room and finds a camera that shows Christine finding the egg and getting electrified by it once it glows. 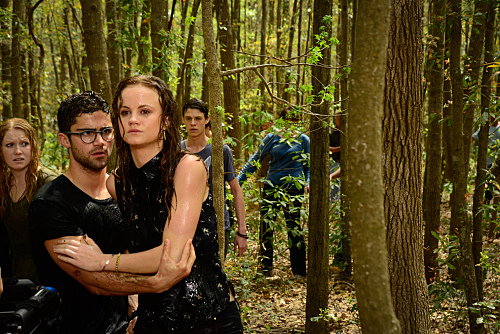 Given the fact that everyone was looking at living inside that hellish dome again, I’m surprised some people didn’t go running back for their pods. The reveal that Christine and Eva were real people came out of left field and was in a way disappointing. I thought if they were aliens or fictional people brought to life that would have been more exciting. For a second I wondered if the dome was using the eggs to bring new bodies into Chester’s Mill since people are always dying left and right. Christine is evil though and her allegiance with the dome is because of whatever happened with that egg. What these eggs are for has never been fully explored but at least one purpose is to seek out people who can be potential allies for whoever created the dome. She and Eva were actively searching for eggs which makes me wonder how many there are and how so many people can know about them. As well as if there are other people like Christine and Melanie who are agents of the dome.

Meanwhile, people are suffering emotionally after being ripped from their happy (albeit fake) lives outside the dome. Junior (played by Alexander Koch) nearly commits suicide rather than face life inside the dome with his abusive father. His uncle, Sam (played by Eddie Cahill), stops him and invites him to a support group that Sam started, but Junior refuses to attend. Junior does eventually find peace after burning down his childhood home and disowning Jim once and for all. While searching the caves, Barbie and Julia have to deal with Eva being in town. He tells Julia that, while his feelings for Eva are real, she is the one he loves. Melanie separates them and nearly kills Julia before she is betrayed and stabbed to death by Christine who pretended to stumble upon the scene. Jim takes a boat and leaves town to live on an isolated island on the lake believing that the people who came out of the pods are different and dangerous. 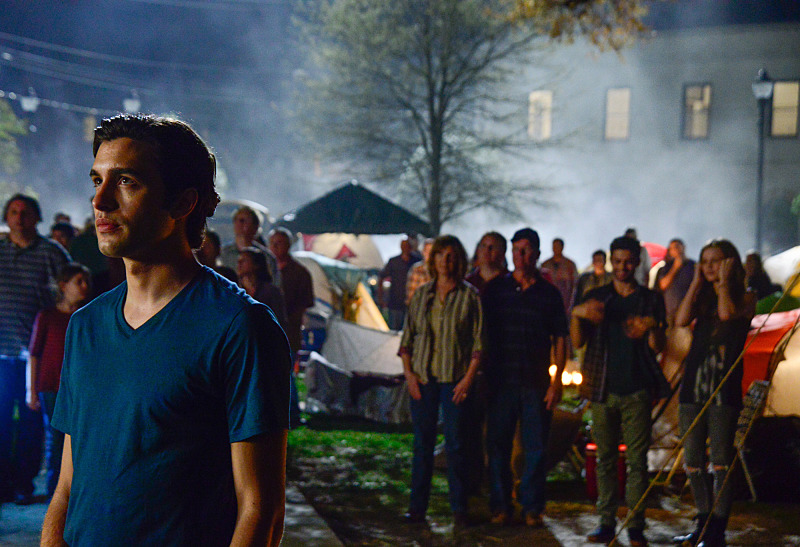 We live to serve.

After going through all of this emotional and psychological trauma, I’m not surprised people are finally starting to lose it. Especially Junior, who already had so much psychological damage, and while his getting closure was nice I noticed a huge plothole. In the first season the entire town had to stop a house fire because it had the potential to spread everywhere but Junior setting his house on fire now was apparently no huge cause for concern. The fallout from several relationships like Barbie and Julia should also be an interesting subplot as the season goes on. Barbie may still love Julia but he can’t deny what he feels for Eva. And what happens if she turns out to really be pregnant? I’m pretty sure Melanie is going to stay dead now that Christine is around to take charge of things. While Jim leaving town could only benefit everyone, he did make a really good point. Everyone who came out of a pod seems different in certain ways and nobody can be sure that they weren’t affected by their brief time inside of them.

That night, Christine activates some kind of homing beacon that lures most of the residents to the town hall in a trance. Although the cocooning process was interrupted most of the townspeople have undergone some kind of transformation. Christine knows that some people will have to be indoctrinated but is confident that the next phase of her plan will be completed soon. This is purely speculation but I think Christine is planning on using these brainwashed people for some kind of takeover plan for earth. These kind of things generally begin in a small town and from there the idea would be to spread out to major cities. But I think people would be more suspicious of people from Chester’s Mill considering they’ve spent so much time inside a clearly visible and most likely alien dome.

“It feels like a year has passed, and I feel different.”

Hard to believe with all of this time jumping that the dome has only been there for about a month.

“I want it back. That life. I was part of something and it felt good.”

I wonder if it’s possible that there is no ultimate goal with this dome and it’s really just a cruel experiment for someone’s/something’s amusement.