Christine (played by Marg Helgenberger) is healing in her pod after being stabbed by Sam (played by Eddie Cahill). Barbie (played by Mike Vogel) and Eva (played by Kylie Bunbury) are forced to stop people from committing suicide because they don’t have a leader.

The suicide attempts stop when pink shooting stars begin to fall outside of the dome. Over the next several hours the world outside of the dome begins to look like an apocalypse. Barbie wants to get word to the outside about the secret door that leads into the dome but Eva is against it. She hides the key to keep him in the tower they used to observe the meteor shower and tries to seduce him. The key falls out of Eva’s pocket and Barbie goes to see if Aktaion has any communication devices. At the diner, Joe (played by Colin Ford) and Norrie (played by Mackenzie Lintz) subdue Hunter (played by Max Ehrich), who still wants to die. Joe wonders if their seizures from season one were a prophecy of the meteor shower and Norrie believes there’s no future with the world gone. Sam shows up and, although hesitant, they allow him to stay since they are all fugitives for the kinship. Sam hides them all when the others come looking for Hunter and is captured. Hunter alternates between trying to kill himself for the kinship and wanting to live. Norrie realizes that it’s connected to emotion; her anger, Hunter’s fear, all helped them break free.

More pink stars, when does it end?!

In an ironic twist of events, the dome is suddenly the best place to be in the wake of the world seemingly ending. It’s an unprecedented twist that radically changed the direction of the show. Now there’s no reason to escape the dome because there’s nowhere to go. Eva didn’t want to bring people in because it would affect the kinship but she did have good points. Ruthless people would probably have forced their way in and if too many made it through they would all eventually starve. I liked the narrative structure, watching the destruction start to finish through all the characters perspectives. The vignettes provided equal screen time for all the character for once and in the end tied them together. You could argue that Joe and Norrie prophesied this, but the pink stars falling happened three other times on the show so I wouldn’t put much stock in them being psychic. The fact that emotional breakthroughs freed people from Christine’s thrall isn’t news. It was made clear a few episodes back but the characters can’t be as savvy as the viewers.

Over on the island, Julia (played by Rachelle Lefevere) tries to use Aktaion’s equipment to contact someone outside. Jim (played by Dean Norris) decides to get drunk and, after seeing the devastation outside the dome, Julia joins. Jim finds a stash of Aktaion guns and contemplates convinces making a last stand against Christine and the kinship. The next day, Jim’s dog turns up, and the two watch in horror as a wall of flame approaches the dome. Meanwhile, Junior (played by Alexander Koch) vows to find Sam and goes to the diner looking for him. Junior asks Sam to help Christine at the caves and he goes. Along the way, Junior mentions a similar shower destroying the alien homeworld. Sam is ready to finish off Christine but Junior attacks him, ignoring Sam’s insistence that she’s evil. Barbie makes it to the edge of the dome and sees people desperate to get in to escape the flames. Eva appears and tells Barbie he can’t save them because they’re part of his old world and they walk away as the people are engulfed in flames. 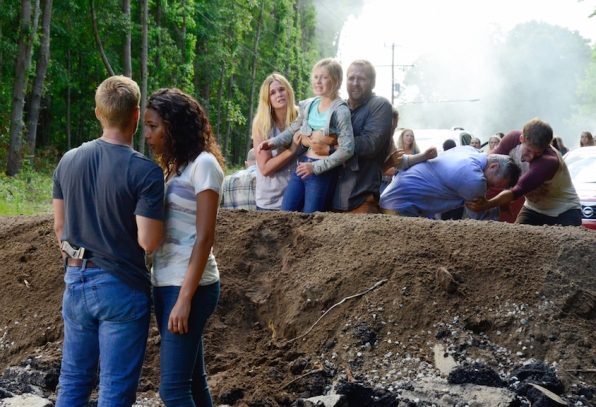 Sorry, the dome is closed!

Although Jim is a better fit in the role of villain, he and Julia do have a good rapport with each other, and I do admire his determination to go down fighting. Jim and Julia being the last surviving humans is a pretty funny concept, the best and worst of mankind living side by side after everyone’s dead and gone. Thanks to Junior we know the alien are here because their home world was destroyed and they needed somewhere to go. I wonder if they ever considered trying to peacefully coexist with humans or if they preferred wiping us out and taking earth for themselves. That scene between Barbie and Eva was supposed to show him losing his connection to humanity by refusing to help those people, but they were already screwed. Barbie may have turned his back on humanity (for now) but those people had about thirty seconds before the fire reached them. There was no saving them.

As Christine emerges from her cocoon, Junior pins Sam down so she can deal with him. Joe, Norrie and Hunter find Julia and Jim and tell her that getting people to show emotion is the way to turn people back. While arming themselves with guns they fail to hear a woman calling on the Aktaion communications system. Although their primary weapon is getting people emotional, there’s nothing wrong with packing some heat. Obviously there wasn’t a worldwide apocalypse so the meteors must have struck places relatively close to the dome. There is a chance that it was a made-up event designed to further Christine’s agenda but that’s no fun.

Maybe the meteor shower was the arrival of more aliens in preparation for the next phase of their invasion.

“I never knew what it looked like to be safe or in love until I met Barbie.” “Look how that turned out.”

It’s funny, I thought the aliens would have dropped more domes instead of meteors.