Melanie (played by Grace Cox) tells the shocked townspeople to follow her through the cave opening and into the light. Although hesitant, “Barbie” (played by Mike Vogel) convinces everyone it’s their chance to escape, and deep rumblings in the cave help make his point.

Once outside the dome, Melanie is gone and pink stars (seriously?) rise toward the top of the dome and it vanishes. Barbie runs back into town to look for Julia (played by Rachelle Lefevre) and Junior (played by Alexander Koch) but finds them dead. One year later, Barbie is back with the military but suffers nightmares about his time inside the dome. He returns to Chester’s Mill with his girlfriend, Eva (played by Kylie Bunbury), for a memorial and finds that life has more or less returned to normal. Everyone is still processing their emotions in different ways, helped by therapist Christine Price (played by Marg Helgenberger). Barbie sees a vision of Melanie while in town and it’s revealed that Melanie is watching everything through several purple crystals. Local resident Ben (played by John Elvis), a high school friend of Joe’s (played by Colin Ford), also sees Melanie and begins acting out. Everyone later gathers at the memorial site and give eulogies to everyone who died while under the dome. 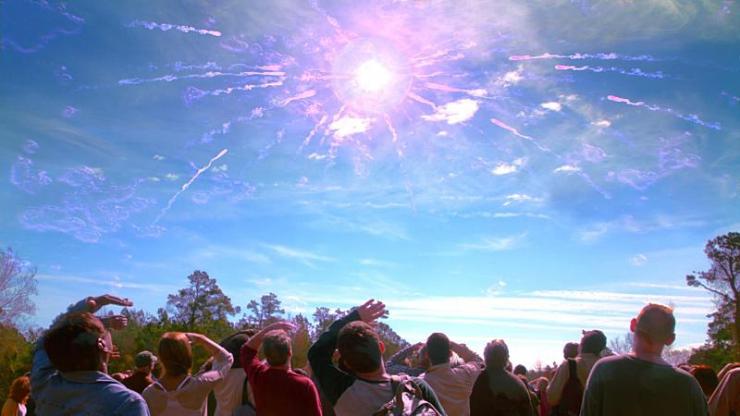 When everyone saw the dome vanish seconds after they escaped it must have felt like a slap in the face. What I found incredulous was that people continued to live in Chester’s Mill after the dome was gone. If it were me I would have moved myself to the other side of the country before risking sticking around. I was expecting the dome to come flying down again on the one year anniversary and bring a whole new set of horrors. The reveal that Melanie was keeping everyone in alien pods of some kind was a nice surprise. The question of course is why is she doing this and I think I’ve come up with a pretty decent theory. Whoever (or whatever) put the dome over Chester’s Mill wanted to see what everyone would have become once freed so they decided to create an experiment. The fact that people are starting to see through the ruse will cause problems which I hope will be fun to watch play out.

Julia and Junior are shown to still be alive in what appears to be another plane of existence. They believe the cave rumblings signaled the death of Barbie and the others but Julia is determined to meet up with them. While gathering supplies at the school they’re confronted by Jim (played by Dean Norris), who takes them hostage at gunpoint. He chastises Julia’s belief that the dome is meant for their protection, but ultimately allows them to leave believing with everyone gone that he owns the town. Julia and Junior use a ladder to cross a cliff inside the cave and are attacked by monarch butterflies. Julia continues through the cave and finds a chamber filled with pods that contain Barbie and everyone else who followed Melanie. 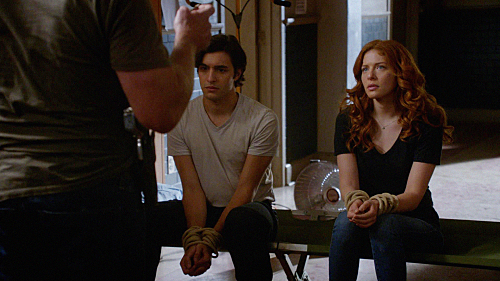 Haven’t we done this before?

For most of the episode I worried that this storyline would hurt the narrative going into the season. Julia, Jim and Junior are all pretty strong characters but I was concerned that watching the three of them fighting amongst each other would get boring fast. The concept is good but with only three characters there doesn’t seem to be much that can be generated. Even Jim seems much less malevolent than he did last season, which is shocking considering he just came off a fresh killing spree. Once Julia found the pod room I felt better about the story’s direction. Especially since until that point the biggest concern that Julia and Junior had was being stalked by a flock of butterflies.

Ben continues to act out and arrives at the memorial looking stressed so Melanie decides to take action. Melanie pulls Ben from his pod and strangles him to death, “setting him free” as she put it. To Barbie and the others it looks like Ben died from an asthma attack. I like that Melanie doesn’t just have a voyeuristic role in everyone’s fantasies. Should someone act in a way she doesn’t approve of, they’re judged and taken out of “paradise” which adds a whole new layer of drama. I’m not sure what Melanie’s overall goal is yet. Perhaps she doesn’t have one and just enjoys playing God with people’s lives.

“Admit that you see what I see. That none of this is real.”

Watching those home movies of Jim bullying his son as a kid gives a whole new insight as to why Junior is so screwed up.

“Jim you’ve got to let us go.” “Why is that, you got a hair appointment? Your roots are looking a little tired.”

Considering all the horrors the dome has unleashed, I would have thought there would be a better defense mechanism than maneating butterflies.

If you enjoyed Manny’s return to the dome, you can find the rest of his work right HERE on Sci-Fi Bloggers. You can also follow him on Twitter @KN_Manny.