Two nights ago, my world changed.

It started at 9:45 AM, on December 17, 2015 (technically December 18 was the official release date, but I was fortunate this time around), when I showed up early to be first in line for that night’s 10:30 IMAX 3D showing of Star Wars: The Force Awakens. There was a tent already there, two fellows who arrived at 2:00 AM for the 7:00 showing just before mine. Throughout the day, the lines grew and grew. I made many friends there, and we all had a lot in common, but one thing rose above all else: we were all ready for the first genuinely good Star Wars movie in a long time.

There was guitar-playing. I hooked my friend’s amp up to the theater and blasted the “Throne Room” song from Episode IV as new lines of people were let in to experience the magic.

If it was bad, we would all be in tears. If it was good, the same would occur.

I shared my experience with friends on social media. So yeah, you can bet I was excited…

…and I thought I had overhyped it.

I thought I had ruined it for myself.

I thought I had killed the joy I might get out of this film.

And then, this happened, and everything was okay.

Guys, I would normally provide details here, but I want those who don’t want anything spoiled for them, but somehow don’t trust that the movie won’t be another prequel mess, to understand, in one concise sentence, what they’re in for: you’re about to take your first steps into a larger world.

That is all. Go see it. Just go, now. Don’t think about it. Do it. I don’t want to tell you anything else because the rest is for you to discover. Go on, enjoy it.

And don’t tell me you don’t believe it, because this.

As for those of you who’ve seen it, here are my spoiler-filled thoughts on Star Wars: The Force Awakens. 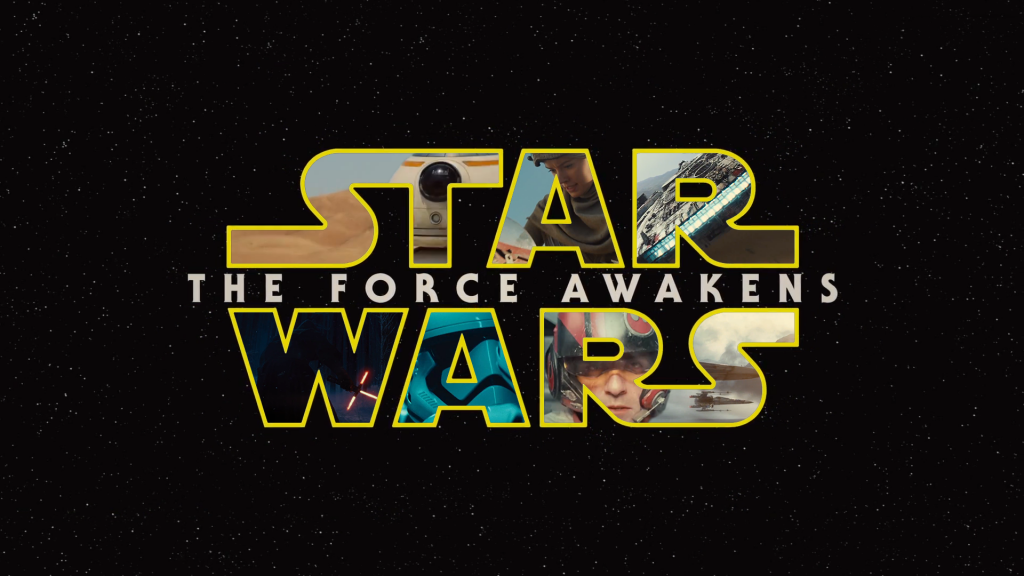 FIRST IMPRESSIONS: From the first sentence of the text crawl, I could tell that Kasdan, Abrams and Arndt (the writers) had their hearts and minds in the right place. “Luke Skywalker has vanished.” How cool was that to read? And the thing is, the crawl as a whole managed to establish so much information while revealing very little of what would occur later on.

Soon afterward our eyes were greeted by a neat homage to the original film with its opening shot taking us straight into the action, with soldiers of the First Order slaughtering resistance forces and civilians in an attempt to locate the map to Luke Skywalker. The level of care put into this scene is visible in both its direction and performances (both of which I’ll cover separately) and it set up a long-missed, subtle form of storytelling nicely. I was excited to find out what would happen next right away.

And I was not disappointed.

THE CAST: First off, let me just say that the original cast of the trilogy was utilized in The Force Awakens to perfection. Every one of them plays their roles not as though they were the characters we knew, but as though they have grown and evolved since Return of the Jedi. Han Solo, though still humorous and fun as ever, isn’t quite as cocky as he used to be, and a touch more diplomatic as well. Leia was always confident, but her wisdom really shines in this movie, and the relationship between her and Han, though fractured, feels like it has a lot behind it. It isn’t forced in any way. No “soft-not-like-sand” dialogue to be found anywhere. And Luke…

The new cast was exactly what it needed to be (side-characters included): funny, genuine, and even moving in their performances. Oscar Isaac’s Poe Dameron was self-assured and slick the whole way through. John Boyega tore apart every bigot on Twitter and showed them all how ridiculous they were being. He was hilarious, charming and real, and the trailer kind of threw us for a loop regarding his character. And, of course, the one who stole the show. Daisy Ridley was the most interesting thing on screen every scene she was in as Rey, and it wasn’t just because of her looks. So much rested behind those eyes. You could tell that everyone in the cast loved what they were doing and put everything they had into their roles. And the best part was that because Finn and Rey in particular were played by no-name actors (as it was in A New Hope), there was no distraction of, “Oh this actor is always so great.” Instead it was just two people, two real people, who we cared about.

And yeah, just a very lovable group of people cast in this film.

Also, as regards Kylo Ren, I’d just like to say two things. First, how glad I am that Adam Driver brought a human to the table rather than a person who is internally a monster or a creature. Secondly, how glad I am that we get a villain who’s in his larval stage and who we’ll get to see grow throughout this new trilogy. I’m a big fan of that sort of enemy (Zuko from Avatar: The Last Airbender is one of my favorite characters in anything) and I can’t wait to see what they do with him.

BB-8: Just a quick comment: he’s amazing. So cute, so funny. Oh my God, what a pleasant surprise. No Jar Jar here, just an exceptional, loyal little droid. If you bought any of the toys beforehand, feel justified. The fact that in most scenes he’s a practical effect blows my mind. I still haven’t watch any of the videos on how he was done but I shall soon enough, because he’s worth it.

THE STORY: Now I know there are complaints about the story being A New Hope. What those who say this should be communicating is that this was a new iteration of Joseph Campbell’s classic Monomyth, because that’s what we were really seeing. This movie wasn’t a copy. It was following a pattern in the same manner the original Star Wars followed a pattern, which has been followed in many other films. J.J. Abrams was simply showing us exactly what Star Wars has always (well, almost always) shown us: it’s not always about the story, it’s often about how it’s told.

The fan service (for the most part) felt like a part of the story, rather than something simply shoved in for its own sake (JABBA DID NOT NEED TO WATCH THE PODRACE), and every turn of events felt intriguing and engaging.

Rey’s discovery of the Force and of the events between the original trilogy and this one caught me off guard. Every new trailer and ad featured Finn wielding a lightsaber, but as the movie went on I began to realize that we had been tricked. And I’m so very okay with that.

There was a particular moment that everyone in the theater hated, not because it was poorly executed but because once it started, we all knew what was going to happen. Han shouted, “BEN!” And we just knew. In fact, I would argue that most people could feel it coming even before the movie started. The point where it was confirmed for me was when he decided he would get Finn onto Starkiller Base himself.

And then it happened. I couldn’t cry, but I could definitely hear sniffling on all sides.

The lightsaber duel at the end was my favorite in the series. Once Finn was down, I knew this was Rey’s fight, not his. And when the saber reached her hands, applause from the crowd right away. Such an epic clash between people I had believed to be siblings the entire time.

That is, until those final moments shared by Luke and Rey…

Guys, this was far and away my favorite part of the film. The silent exchange they shared was so poignant and told us a great many things without a single utterance. It left me thinking and feeling a lot. I could honestly watch it over and over.

The music helped, which by the way…

SCORE: John Williams, please come back for Episode VIII. It just wouldn’t be the same without you.

THE DIRECTION: J.J. Abrams really understands how to do proper visual storytelling. The shots in this movie are gorgeous and they say a lot with very little. I heard he used the lenses from A New Hope to shoot it, which is really something. The cuts and timing are also utilized not simply because they “seem cool” but because they deliver messages, both overt and covert.

One great illustration of this is when, after Rey bests Kylo Ren, the ground breaks apart between the two, symbolically referencing the division in their views while recognizing how similar they are. Classic moment.

And with how natural the actors’ performances were, you can tell Abrams really knew how to simply let people go through their process and deliver via their craft.

The audience applauded multiple times throughout my viewing. Obviously there were many fans there, but still, I don’t think Menace came close.

THEORIES: Based on what I’ve seen, I only have a few main theories.

The first is the most obvious one, that Rey is Luke Skywalker’s daughter, only because of the way he responded to her holding out his lightsaber. I just wonder why she was left on Jakku.

The second is regarding Rey’s “Force dream.” This was clearly reflecting Luke going into the cave in Empire, or at least it seemed that way to me. However, there was more to it. In it, we saw what I believe was the new Jedi Academy Luke attempted to form, and then we watched it crumble (symbolism) to reveal a mourning Luke and Kylo and the Knights of Ren slaughtering Jedi trainees.

The third was of course Rey being left on Jakku, with the fourth being the future, where Rey met Kylo in the woods.

One thing I noticed was that when Kylo was pulling thoughts out of her mind, he saw what may have been the island we see at the end of the movie. Could it be that she’s been there before? Was she seeing the future?

Lastly, I think Snoke has some ties to the Old Republic era. I’m not sure exactly what’s canon anymore, but this character just seems very, very old. And Abrams said The Force Awakens would contain references to that time period.

CLOSING THOUGHTS: Guys, Star Wars is back. It’s not a dream anymore. It’s here. Can you believe it’s actually here? I know I sound like a fanboy, but let me put it this way: I think we’ve grown quite cynical lately. I think we’ve become critical and irrational and that we’ve forgotten how great it is to have and value fun. This movie, to me, has and values fun, and that’s what makes it so great. I think this is an important creation. This is something we need in today’s world. I hope that, if nothing else, you can at least find a sense of childlike wonder and joy in what J.J. Abrams and Disney have given us.

I’m not saying what we’ve been given is flawless, but I am saying that it’s beautiful, artistic and necessary.

Read the beginning of this again.

That matters, that actually matters.

Thank you, Mr. Abrams, Disney and everyone involved, for giving me back my Star Wars. It was really, really fun. 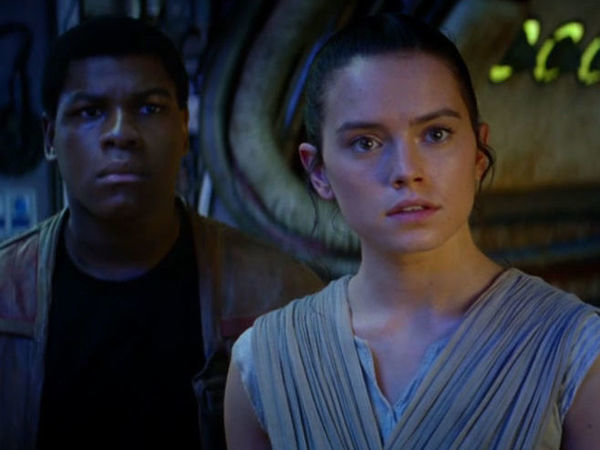