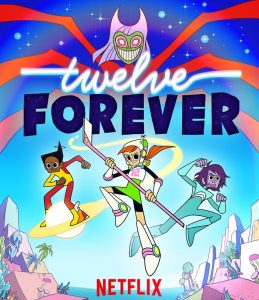 Do I have any business criticizing Twelve Forever as an older male viewer? Perhaps not, but, as a reviewer of movies and television and I have been a twelve-year-old, I do have some perspective on this show. And I actually have a little backstory to go over with this one.

Because I originally came across the “minisode” of Twelve Forever on Cartoon Network’s YouTube channel. It slipped from my mind for a long time—until I happened to see it pop up in my recommendations recently, and then, as if by fate, there it was as a show on Netflix.

And, while I don’t know the true history there, I do see why it didn’t fully make it to the Network—because the first real episode is obnoxious and annoying and loud and chaotic and random. Twelve Forever seemed so bad that I nearly bailed out on the first episode, forsaking my three-episode rule for my own continued mental comfort.

Twelve Forever Has Some Spark To It

But something was there. Occasional. Sporadic. Lines of dialogue that were witty and funny. And, most surprising of all, relatability. The moments where they weren’t in their magical land of insanity showed a shockingly accurate portrayal of what it’s like to be that age, right at the cusp of budding adulthood. I was lucky to have a fellow media-savvy girl nearby who assured me that even the female-specific aspect of childhood represented was very accurate. Seeing our main character’s reluctance to throw away any old toys brought me back to similar moments in my own past.

It was enough to keep me going.

To try that second episode.

And it was if a veil parted to some degree. I suddenly see what the appeal might be, and why the show didn’t just die out after the first, still generally insufferable, episode.

Because Twelve Forever, unlike so many others, shows adult and child characters who are cut from real cloth. The mom appears to be one of the most honest portrayals of a single mother I’ve ever seen in a cartoon meant for kids, and the child characters are not just adults in kid bodies, or defined by some quirk, or perfect to a degree that’s insufferable—they are all realistic. Though the show spends way too much time in the magical land, that world is still accurate in metaphor. It feels like something that came out of the imagination of a child that age. If you take it as a place that’s representing things, and the show does seem to overtly state it is, it’s got a tinge of nostalgia without even referencing real things from the past. 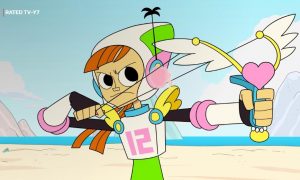 And then there’s the Butt Witch.

And, yes, that’s a sentence I just typed. That’s her name—and though I want to get mad about that, as it is patently stupid, it’s also what a twelve-year-old might call a demonic being that’s hyper-sexualized in features as a representation of the fear of oncoming puberty. She’s both a perfect villain for this series and a fun villain for anyone who just likes good, campy enemies like Skeletor or Doctor Eggman. She also has fun voice acting that reminds me of Tim Curry—which is always a plus.

Stack these all together, and I would not even be surprised if there are adult fans of the series. I wish Twelve Forever consisted of only the aspects that deal with what it means to grow up—because it’s handled beautifully—but as this is a show for kids and kids like magic and whimsy, it’s a necessary evil. And it does mean we get the Butt Witch.

For kids who are reaching that age, this show is something worth seeing, an honest, but kind look at what will happen to them. And for the adults who must be in the same room, I assure you it does get a lot more tolerable past the first episode, and even interesting if you look beyond the candy-colored explosion to the maturity beneath. 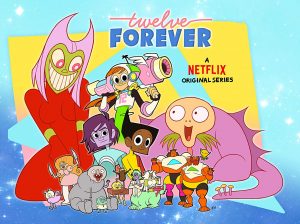