Welcome to TV Prep, where we get you ready for the day’s upcoming show(s) with reviews of earlier episodes! Today’s show is The Leftovers.

This might be the episode that I was waiting for, all about our crazy preacher man, Matt, played by Christopher Eccleston (the Ninth Doctor from Doctor Who). We begin with a prayer for a girl in a coma named Emily, before Matt is assaulted by a man who was angered by one of his flyers—the ones that show that the departed weren’t all good people. I can’t explain why, but I really enjoyed the scene where Matt realizes that Emily had woken from a coma after praying for her that very morning, only to have the hospital attendant reply, “Well, she woke up last night.” It just reminded me of how so many people thank a god that they believe in for healing the sick, when really they should be thanking the scientists and medical professionals who have created the technology. (Sorry, friendly atheist here.) 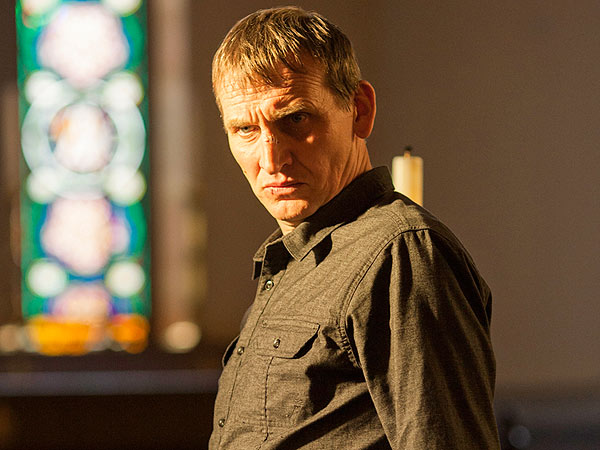 So, I’m leaning more toward this Departure not being “God.”

Matt’s on a mission to learn more about another “bad person” who departed on October 14th when this group of pigeons “tells” him to gamble on red. He needs money before someone else buys out his church and, more importantly (to me, anyway), his caretaker quits watching over his comatose wife.

So, he takes his pigeon theory, and his $20,000 that Kevin’s father left him before going crazy, to a casino. This scene made me so nervous. I figured that he’d continue to win until he had reached his goal of $160,000, but when he got into this car with that envelope full of cash I was in full freak-out mode. I get nervous when I have a few hundred that I just got from the bank, so to have that much money in a casino parking lot in the middle of the night—LOCK THE F*CKING DOOR.

Don’t worry, Matt is actually a bit stronger than we thought and actually fights off a mugger. En route to the bank, he attempts to help a fallen member of the GR. In the process, he gets hit in the head with a rock. This is when things get really weird. The visions that he has while unconscious show himself as a boy (only he’s an adult) being told that his cancer is spreading. Then, he’s standing outside of a house that’s been lit ablaze with a little girl. She asks if they’re all burning inside. We then see October 14, when the Departure happened, and the world is in chaos. His wife’s head is bleeding against the steering wheel of a car. Try calling 911? He got a busy signal.

Next, he and his wife are making love and there is a close-up of the picture that he has hanging in his bedroom. His wife asks why he “persists” before turning into Laurie, and then his hands catch on fire. He wakes up and rushes his money to the bank, hoping to pay off the debt that he owes for his church on time. Unfortunately, he finds out that he hasn’t been knocked out for one day, rather three. He goes to the church and finds the GR whitewashing it completely.

My question is why doesn’t he seem to be so concerned about his wife and the caretaker watching her? He’s been missing for days! Did the caretaker call social services? What is the significance of the painting?

Please don’t let this be all about God, HBO. I need something more.