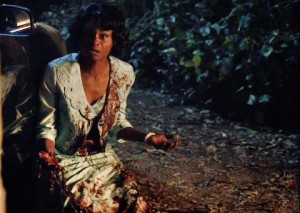 Okay, okay. I tried. I tried to finish the binge-watch first and then dive right into the final season of True Blood, but Sunday night is now Westeros-less. What else am I supposed to do? As eight o’clock rolled around, my fingers started itching toward the remote and, well, I am weak. So I mixed myself up a vodka cranberry and braced myself.

I was crying five minutes into the episode. As these Hep V vampires, with nothing to lose, trashed the town’s vampire-human mixer, Tara faced off with some random vamp who was after her mother. It looked as though Tara was on the winning side, when the scene cut and the madness raged on. There was a whistle and, POOF, they raced off, leaving the sound of Lettie Mae’s screams. Covered in vampire remains, she sobbed, yelling that they killed her baby.

Now, I’ve had time to cope with my feelings and think about things rationally, and now I’m doubting the death of Tara. She has been in this show since day one, she’s been killed before, and I believe that if she were to suffer the one true death, we would have seen it first hand. The speed that the vampires were moving could have been way too fast for Lettie Mae to fully comprehend what had happened. There are other factors that could prove that Tara isn’t dead, but I guess we’ll just have to wait and see. 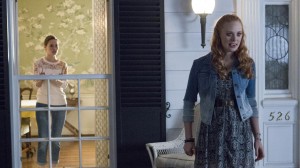 Was anyone else disappointed with the scary Hep vampire at Andy’s house? When Jessica said that the vampire couldn’t get in, but could still hurt Adilyn, I thought that something was actually going to happen. I was expecting the infected vamp to try to burn the house down or something!

I feel that this whole plot was to get Ady to drink Jessica’s blood, getting Jessica inside of the house, and to show that Jessica is super hungry. That’s it!

Jason and Violet finally had sex after being together for over six months.

It’s seriously like a never-ending game of hide-and-go-seek when it comes to Eric. First, we got the corny Jason/Eric dream where Jason’s all, “Found ya!” Next, they gave all of the slash fanfic girls their dream shot, and it’s not even photoshopped! 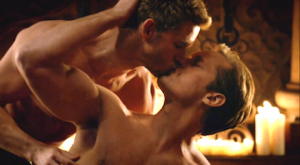 After investigating a dead body found in the woods, Sookie and the crew took a little trip to Saint Alice, finding the town completely empty. The town had asked Major Sam for help, but no one came to their aid and the vampires picked through them until there was no one left.

Sookie began reading a diary and could relate to the woman who had met her first vampire—until the hep vampires took over. If this is what the writers meant about the show going back to its roots, Sookie remembering why she fell for Bill and all that, I’m going to be irritated.

Meanwhile, in Russia, Pam was searching for Eric by playing Russian Roulette and stuff. Another reason why I don’t believe that Tara is dead: we don’t see Pam react in the slightest to her “child” being dead. Incidentally, Pam’s not looking so good, obviously not having fed in a while.

Lettie Mae is now addicted to V. Okay, can we play a game called Who on This Show Hasn’t Been Addicted to V? Seriously. She went to extremes to get Willa to give her another hit, and then went into some kind of trance where she saw Tara again. It reminded me of season two with the Maenad, especially the other language that she was speaking. 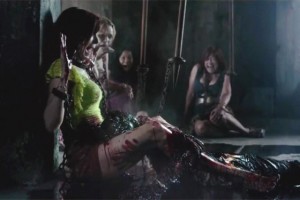 So Arlene and company were in the basement of Fangtasia being kept alive for snacks. I’m so confused by these vampires. They don’t seem so much like mindless zombie vamps and they’re trying to be organized. I don’t understand why they only sleep in fifteen minute intervals, unless it’s because they know that they’re going to die and want to live as long as possible (which doesn’t make sense because it’s daytime and they can’t do anything anyway).

Arlene recognized one of the vampires as a teacher that her children had and enlisted her to help them out. Unfortunately, Betty died right when the escape was going to go down—while drinking Arlene’s blood.

And the hide-and-seek adventures ended in France, where Pam found Eric—infected. 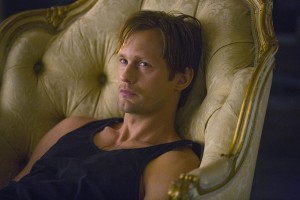 My theories for this season so far: Bill and Sookie will get back together, there will be some kind of miracle cure for Eric, Lafayette and James will have some kind of an affair, Jessica is going to eat some someone (again), and Arlene will get the girls away from the Hep vamps.