The film is being directed by trusted TV and Thor: The Dark World director Alan Taylor. Arnold Schwarzenegger will return as the Terminator, just an aged version of his previous character. Leader of the resistance, John Connor, is played by Dawn of the Planet of the Apes actor Jason Clarke. In the year 2029, John sends Kyle Reese, played by Divergent’s Jai Courtney, to save his mother Sarah played by Game of Thrones’  Mother of Dragons herself, Emilia Clarke. Is this sounding familiar?

Oh yeah, and though I didn’t see him, the tenth Doctor, Matt Smith, is in there somewhere. 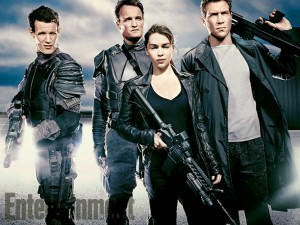 The trailer pays heavy homage to the original Terminator from 1994. The action and warfare sequences look awesome, and everyone’s excited that Arnold is back. What worries me about the teaser? The acting and CGI.

Whereas the new Abrams’ Star Wars teaser tries to stay far from the originals, Genisys knocks you over the head with references, plot details, and even scenes that look like shot-for-shot remakes. If it tells that story in a new way, then I’m in, but I’m going to need some serious convincing. Lines are redelivered in tones that feel like parodies. Sarah Connor crashing through glass and whipping into a T-1000 should be awesome, but the line, “Come with me if you want to live,” is delivered so poorly that I laughed out loud. A silver-haired Arnold even says his signature, “I’ll be back,” then proceeds to dive bomb out of his helicopter and comically launch himself into another. Like, what? John Connor is also covered in hideous scars that look like they came out of a Halloween makeup kit, but maybe they’ll get touched up before release. He and Reese share an intimate handshake…while Reese is nearly naked, which I am not complaining about, but I laughed out loud at the weird and awkward tension it created.

Maybe I’m completely out of line. What did you think of the trailer? Check it out below.