It’s Hollywood…it happens. We get bored and themes get played out and studios relentlessly inundate us with the same thing. It was vampires and for the last few years it appears that everyone has their own zombie screenplay. If I’m going to spend money to see another walking dead feature then it better be new and exciting. The upcoming Pride and Prejudice and Zombies is that movie.

So it’s not exactly fresh and new, it’s actually a reimagination of a classic story and an old trope, but it’s not taking itself too seriously. The film stars Lily James and the famous Elizabeth Bennet and Sam Riley as the swoon worthy Mr. Darcy. This version won’t follow the classic romantic plot, obviously. The Bennet girls are ready for a fight and the romance might have to take a back seat to awesome action and gore. 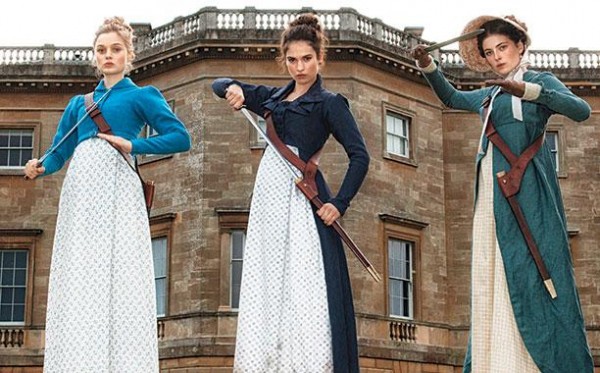 The film is based on a parody novel written by Seth Grahame-Smith honoring the classic words of original author Jane Austen. Smith also wrote the book Abraham Lincoln, Vampire Hunter which was turned into a film in 2012. The novel was well-received and has sold over 1.5 million copies in the United States, but still had trouble adapting to the big screen. Back in 2009 it was announced that Natalie Portman would star and produce in the feature then just two years later the part of Elizabeth was offered to Emma Stone. The film also tried snagging a bunch of big name directors like Silver Linings Playbook’s David O. Russell and Dawn of the Planet of the Apes’ Matt Reeves, but ultimately it will be screenwriter/director Burr Steers taking the helm.

Pride and Prejudice and Zombies also stars Game of Thrones’ Lena Heady and Charles Dance as well as the Eleventh Doctor, Matt Smith. Catch it when it comes to theaters on February 5th, 2016. Literally, the best date movie concept of all time.

If you enjoyed Carly’s pride, you can find the rest of her work right HERE on Sci-Fi Bloggers. You can also follow her on Twitter @MrsCarlyRodgers.