That’s right folks, the Game of Thrones season has begun yet again with an exciting new trailer from HBO. And boy am I stoked to talk about this one because I’ve watched it a few times now and there’s a lot to cover. Spoilers for the entire series ahead.

Let me start by saying the last season, our fifth journey through Westeros, didn’t impress me that much. Overall, I should say. There were instances that got me and my friends jacked, but as a whole season five wasn’t particularly well-structured, and I think I know why. In my opinion, even having not read the books on which the series is based, it appeared that there was a lot of veering of course in terms of adaptation, but not in a good way. There were unnecessary deaths and unneeded plot lines that seemed to exist purely for either shock value or sex appeal. Upon asking a friend of mine who had read the novels, he told me that many of these things did not occur and, yes, took away from the show as a quality work. I’ll say this: I love changes in adaptations if they’re done well. They can sometimes lead to powerful moments or interesting character development. But taken too far or executed in a manner that doesn’t contribute to the actual message of the overall piece and it makes the rest fall down a notch and comes across as cheap.

Anyway, “Hardhome” was awesome and justified a lot of what I had a problem with this past season. Now, however, we only have (as far as we’ve been told) a few more go-arounds of this, so Game of Thrones really needs to hit its stride again here. At least that’s my opinion on the matter.

Well, my friends, I believe they may already be hitting it, because this trailer kicked major melted face. 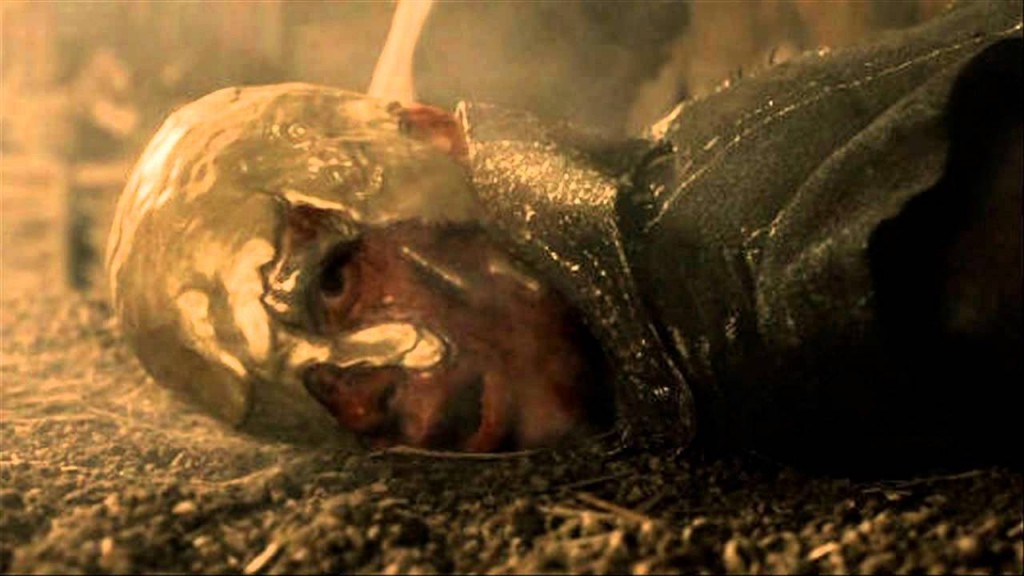 Now, I normally don’t do this, just because I like to have my theories remain unaltered by the knowledge of others, but since the majority of what will be happening this season hasn’t been written in the A Song of Ice and Fire series (or at least published), I decided prior to watching this to watch a trailer breakdown video, just because I wanted to know if anyone was thinking what I’ve had on my mind since season four (and really since the end of season five). Sure enough, some of my thoughts came up, and I even learned a few new things, so I’m providing a link to Red Team Review’s awesome trailer breakdown right HERE. Keep in mind that they have read the books but don’t give too much away.

Okay, let’s finally talk about the trailer itself. This thing opens up strong, doing exactly what the last two teasers did only with newer, more relevant footage: reminding us what we’ve lost. And it’s interesting, it has actually caused me to reflect on season five in a new light. I now look at it as a season of loss. Yes, we lose things all the time in Game of Thrones, but last year in particular (especially in the final episode) took more from our characters, in my view, than anything prior. Although it was the weakest set of episodes this show has given us, it did have a strong theme running through it, with each character finding what they had gained previously during to dust before their eyes. And they all held on as best they could, or rather tried, but hardly anything worked out for them in the end. Arya is now without vision (on a physical level) and identity (on an emotional level). The Lannisters had their pride and power dashed to pieces, tools that gave them aid in the very first season of the show, in the very first episode even. Daenerys had an empire bowing before her and a purpose worth fighting for. Now, she’s a slave, as she was at the start. Even Melisandre has no faith leftin her “Lord of Light,” shattered by the harsh reality of defeat.

And, of course, Jon lost his life (or so we think).

After that, however, the trailer really kicks into gear. The new authorities and powerhouses of Westeros (the High Sparrow, Ramsay Bolton, and HOLY CHRIST BALON GREYJOY WON THE WAR OF FIVE KINGS) are (apparently) about to be challenged by the fallen. This is epitomized in the exchange between Lancel and Cersei Lannister:

“Order your man to step aside or there will be violence.”

It’s gripping stuff the rest of this trailer, and yet it indicates that the show’s central conflict (the coming war against the White Walkers) hasn’t been wholly funneled towards yet. There is still a struggle, a vain, useless struggle, to “smash the beetles” that will likely persist until it is too late. That being said, there are definitely goings-on south of the Wall that will be worthy of observation. Arya is training in the House of Black and White (perhaps obtaining powers still beyond our understanding?), the Boltons are going to war, the Greyjoys are AT LAST back in the game (of thro—no, don’t, don’t), Daenerys’ former home is getting, er, blown up(?), the High Sparrow is offering a certain someone their freedom(??), and Bran is either walking or having the CRAZIEST VISION EVER(???!!!!!!)!

Folks, this is looking to be one hell of a season. And to top it all off, that video I linked you to goes over a clip in there that may or may not be featuring Ned Stark taking the Tower of Joy (you know what that means theorists). That honestly looks so exciting.

I’ll leave you with one last bit of data: I have a theory I’ll be publishing later on regarding the potential survival of the entire Stark family, why it would happen, how it could, etc. You can reach me at my personal email, okomohukaru@gmail.com, if you have any input on that.

I think that’s everything guys and gals! It’s a really exciting start to yet another epic season of…