Can you even?! The first official trailer for the upcoming Captain America: Civil War was released during an episode of Jimmy Kimmel Live when Captain America and Iron Man themselves, or in reality actors Chris Evans and Robert Downey, Jr., were featured. Check it out.

So, this trailer does a few things really well, like make it clear that this film is really centered around Cap. When the list of actors appearing in the movie kept growing and growing it was a concern that Cap’s story would get lost and this would attempt to be another Avengers-like film. The teaser also lets viewers get really excited about what they’re going to see this upcoming May when it hits theaters for real. I mean, Black Panther you guys! 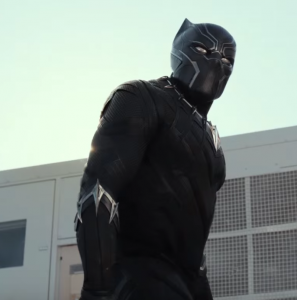 The thing I found the trailer lacked enough backstory. In the short clip it seems like Cap and Iron Man are fighting over Bucky. Like, what? The real info is when William Hurt’s character is explaining to Cap that the government will be stepping in and regulating these heroes, but Cap doesn’t like that. Also, I’m not personally familiar with the storyline from the comics but why would someone like Cap be opposed to limits and regulations and why would Iron Man be all for it? It will probably be explained in further detail, but as of now I can’t wrap my head around it.

Another thing is that while I am very, very excited to see the film when it comes out, I don’t think the main character was given the right spotlight. By the end of the trailer, I was pissed off at Cap. Watching him wail away at his former colleague was brutal and completely unexpected. Maybe I’m supposed to be shocked? But, as far as I’m concerned, Cap wasn’t given enough weight in the preview. Viewers feel bad for Iron Man. In a fight where we should feel conflicted about two of our heroes fighting one another I was cheering for the snarky philanthropist. What does that say about a Captain America movie?

If you enjoyed Carly’s pro-con war, you can find the rest of her work right HERE on Sci-Fi Bloggers. You can also follow her on Twitter @MrsCarlyRodgers.