The Batman Is A Step Backwards for DC?

The Batman trailer had me invested until one scene ruined it. And that is the moment where he beats the utter snot out of a presumed henchman. Yes, I know Batman often uses aggressive force, but he’s not usually deranged.

But the rest of it is interesting. I don’t think I’ve seen the Riddler presented this frightening. He’s usually on the goofier side of things, with his green suit and cane. This time he’s a serial killer with a clue shtick, and that’s intense, but a good way to take the character if you want to be dark.

Though DC being dark is vastly overdone.

Now, there’s nothing wrong with gritty superhero movies. If they connect this to Joker, then it could even function as a continuation of themes.  But the current viewing public does not need excessive melancholy right now.

So, yeah, Robert seems like a solid choice for a young Batman, but I hope he’s not dragged down by DC falling into old habits. I thought Wonder Woman finally broke them out of those. 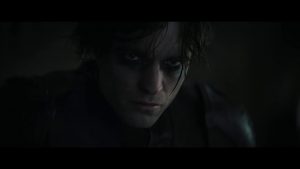