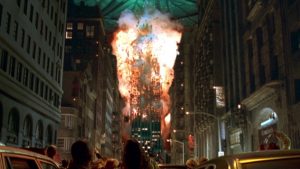 Anyone Up For Some Big Explosions?

If they don’t hurt anyone (or anyone’s livelihood), who doesn’t love explosions? There’s something viscerally pleasant about an eruption of force rippling outward. The shock wave, the bang, the scattering of fire or debris: they are a lot of fun.

And, since this is the day where America causes explosions for fun, I thought I’d recount some (subjective) best explosions in fiction. Scenes that show the true power of fire and fuel and force blazing with glory. 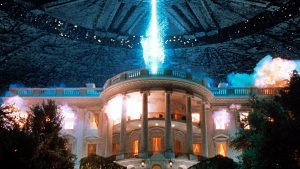 So, I am not sure how I feel about this movie as a movie, but, in terms of explosions, it has many that will remain classics. The first of the two I recall best is when the aliens reduce the White House to slag with a massive laser. To date, that might be the most famous destruction of a monument put to film. The other comes toward the end, when a single fighter, Randy Quaid’s character, blows himself up along with an entire alien ship. This movie might be goofy, but, for explosion fans, it’s pure spectacle.

Anyone up for roasted marshmallows? I was terrified of the Stay-Puft Marshmallow Man when I was young, and, now, watching that massive calorific monster turned to globs puts a smile on my face. However, I do still wonder how the city dealt with the whole “massive chunks of food particles” problem. You must imagine there are still patches of sidewalk sticky enough to steal shoes. But, regardless, it’s an insanely memorable ending to an already awesome movie.

Guardians of the Galaxy Vol. 2

Ego, to date, is the second-best Marvel villain. Thanos is the best—but, since we don’t yet know how he might be defeated—Ego still has the best death. Ego is a planet, and, in sci-fi movie terms, you can’t go much bigger than destroying a planet. The lead up to it with Groot’s silliness and then the devastating loss of Yondu lends a lot of weight to this one explosion. It might not be the most impressive visually, but, from a plot perspective, it’s an explosion across the series’ storyline, shaking it to its core. 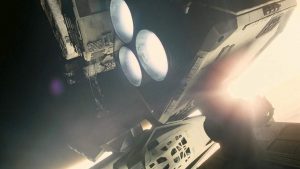 A controversial pick, I know, but, that one scene toward the end of Interstellar, where Matt Damon’s character is interrupted mid-speech shocks every single time. If you saw this movie in theaters, then you know how big of a reaction this scene gets. The drop-out of sound, how jarring it is…just awesome. An amazing, explosive surprise: I’d expect nothing less from a Christopher Nolan film. 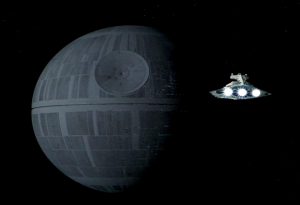 What else would it be, really? Sure, the Death Star wiping out Leia’s planet is a moment seared into pop culture for the rest of time. That scene is so iconic, that, to even try to match it, The Force Awakens had to have a ship that could destroy multiple planets at once. But nothing beats the original Death Star exploding. It’s been parodied, mocked, and referenced, and will continue to be for the foreseeable future. It truly is the most explosive explosion ever put to film. A shockwave kicking-off one of the biggest fandoms in the world.

From Sci-Fi Bloggers, have an awesome Fourth of July everybody. Stay safe out there.