A famous filmmaker announces that is about to realize a new Sci-Fi apocalyptic movie and the first thought that crosses the mind of the New Yorkers is “Oh no, so we get do die; again”. If earth is under attacks by someone or something, you can be pretty sure they are going to start from the big apple (why is it never the North Pole?); the city recognized as the center of the world and the heart of America is the incarnation of the perfect target and, it goes without saying, seeing those incredible buildings blowing up or falling apart always gives us a little thrill, making us forget that the truth sometimes can get even worst than that.

Hollywood has always searched for new and creative ways to destroy New York City, and here is the Top 5 list of ways to do that properly. 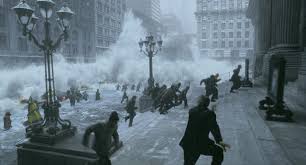 Number 1: Apocalypse, The Day After Tomorrow.

Man has pushed it too far; because of a non-returning point reached in the Global Warming, the earth is doomed to experience a new Ice Age, in which waters and freezing temperature will devastate the entire planet. The first scene that comes to mind when thinking about this movie is the gigantic wall of water that invades New York City, destroying everything on its way, soaking the Statue of Liberty and trapping our protagonists in the famous Public Library. The world is devastated by nature and New York is the first to become an icicle.

Aliens arrive with their immense army of spaceships to conquer the planet and where is the chosen parking spot for the Main Spaceship? Being the city the natural habitat of all different kind of crazy people, it is the perfect occasion to put a group of aliens fan on top of a building to yell “Take me!”. Here we almost see a parody of New Yorkers, until finally a big lighting blows up the entire district. 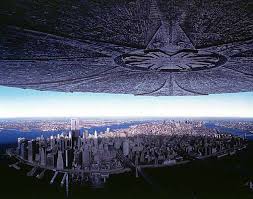 Sometimes living in New York you may feel like you are already among zombies, but the perfect way to see a good and effective zombie’s invasion is in War World Z. Even if the movie has been an exhibition of the common and “seen two thousand times”, it is fair to say that the scene in which zombies take over the city is well executed and really thrilling. It is also very realistic, being the protagonists first of all stuck in the traffic.

I personally loved this movie for the way in which has been performed. Finally in Cloverfield we get to see the same old Sci-Fi monster movie but in a very original and realistic way thanks to the live camera. The “Creature” starts its attack from the Brooklyn Bridge and then takes over Manhattan, walking around slowly and undisturbed, just like a perfect tourist. 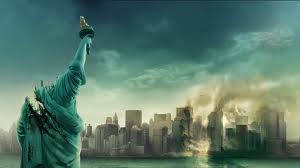 In the Marvel’s masterpiece New York is not simply get attached, is basically invaded right away by all sorts of creatures pumped out from a portal to another world. Luckily our heroes are already there all ready and suited up for kicking some ass while making jokes about it. The invaders get send back to their stinky planet, but not before having destroyed everything on their way; it almost seems sometimes that, if there is a building somewhere, it has to be taken down.