**Note, this list was written based on early impressions. It’s possible that some of these shows might trainwreck as they get farther along.**

Can we even call this one science fiction? It’s got aliens! Well, okay, it’s got a kid who claims to be an alien with a magic hypno-squirt gun. Who talks to fish.

Let me back up: Yuki Sanada is a high school student who just got transferred to the island of Enoshima due to his mother’s work. This is a pretty common thing, and he’s gotten used to not making friends, but this time the aforementioned crazy person (?), named Haru, takes it upon himself to befriend Yuki so he can live in his house. When Haru decides that what they really need to do is go fishing (and he does have a hypno-squirt gun, so Yuki is not a part of this decision), they’re joined by a very serious guy named Natsuki, the “prince of fishing,” and a friendship is born.

So yeah this show is… I’m not sure what it is, honestly. It’s surreal, whacky, and about fishing aliens. And I think they might just be serious about that alien bit. Give it a look if you’re up for something different.

University freshman and self-proclaimed mad scientist Rintaro Okabe (though he’ll tell you his name is Kyouma Hououin—got to protect his identity from “the agency”) thinks he’s struck it big when his experiments with microwaving bananas pay off, allowing him to send text messages to the past. Soon he, and a circle of others, are using this power to rewrite the past, and the present along with it.

It sounds silly, and it is to a point, but the first use of this power resulted in a girl getting un-stabbed to death. And that agency that Rintaro is so paranoid about, might actually exist—and not be pleased that a bunch of kids have started screwing with time. Actually, the series’ stark, high-contrast visuals have the potential to beat down its more comedic moments by sheer weight of bad things happen in this world. You can bet that, as always, attempts to change the past have consequences—and trying to set things might just cost the characters more than they’d bargained for.

For a dark, psychological, time-bending mystery with a thin veneer of levity on top, pop open Steins;Gate. 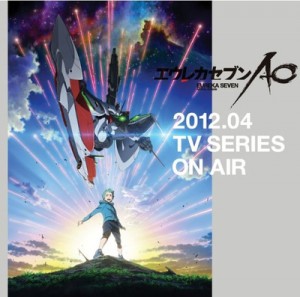 When mysterious, living rock formations known as the Scub Coral invade the independent (in name only) island of Okinawa, thirteen-year-old Ao Fukai is thrust into the cockpit of the Nirvash, a giant robot that was retired from service ten years ago, after his mother vanished while piloting it. Eager to discover what happened to her, he throws in with the elite task force who specialize with incursions of Scub Coral, Generation Blue.

The followup to the 2005 hit anime Eureka Seven, AO is a beast both familiar and different, which is a good thing. It’s still got giant robots that surfboard on the sky (always a plus), and the characters are pretty compelling, though perhaps not as deep as those in the original series. Ao comes out as a strong lead, trying to deal with the isolation of being “the kid of that foreign woman who fell out of the sky in a giant robot.” The fact that he inherits her teal green hair and purple eyes doesn’t help matters (it looks pretty silly on a guy, but hey, at least the show admits it).

What’s interesting as someone who watched the first Eureka Seven is the difference of the setting. The planet the show takes place on is obviously Earth (which was a surprise reveal in Eureka Seven, but probably not that surprising since the show never tried to convince you it wasn’t set on Earth), and the political situation of the world bears almost no resemblance to what was established in the first show. Actually, with the Okinawans’ desire for functional independence from Japan set against Japan’s attempts to appear strong in the face of global superpowers, the politics are much more interesting this time around, and characters have way more personal stake in them.

Definitely worth a watch if you’re a fan of giant robots, and doubly so if you liked the original Eureka Seven. I know the last thing that show seemed like it needed was a sequel, but AO has turned out to be a pretty great series in its own right.

Also, easily the best opening of anything on this list: Eureka Seven AO opening 1: Escape

One night, while brothers Mutta and Hibito Nanba are out in their neighborhood pretending to be on a space expedition, they see a UFO fly off for the moon. Hibito instantly swears that when he grows up, he’s going to the moon. Mutta, believing that it’s an older brother’s duty to be the one who goes first and paves the way for the younger brother, counters by promising that he’s going to Mars.

Seventeen years later, Hibito is right on track for his dream, and Mutta is a recently fired automobile designer. With a helping shove from his brother, Mutta applies for the JAXA (Japanese NASA) astronaut program, and begins fighting to recover his childhood dream.

At its core, that’s what the show is about—childhood dreams, family relationships, and how they pursue us into adulthood. Watching Mutta struggle to overcome his limitations (both real and built up in his head), and to pass the tests to become an astronaut makes for engaging viewing, and the overall sense of rediscovering oneself and one’s dreams (along with a fairly whimsical sense of humor) makes the series a great feel-good show.  Heck, it’s right there in the opening theme.  In English.

For a show that will make you “feel so moon,” Space Brothers has got your six. 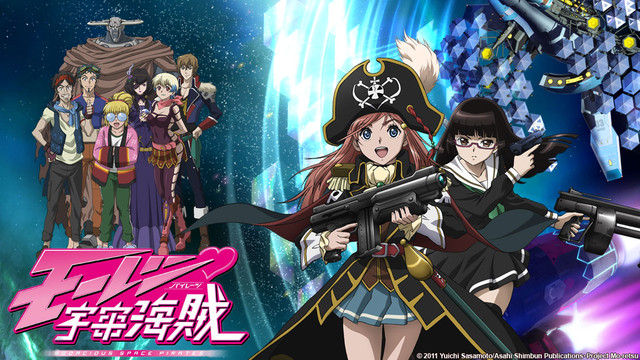 What can you say about a show called Bodacious Space Pirates? Well, how about, for starters, that it doesn’t have hardly any fanservice (does sticking characters in maid outfits count?), and less gratuitous action than you’d think. Instead, it’s an incredibly fun show about a teenage girl inheriting her father’s pirate ship, and trying to navigate (hah) this new aspect of her life alongside the old.

To put it another way? In this show, the main character learns how to fire an armor piercing laser rifle from her mother, also a retired space pirate.  Who then gives her a pretty badass “with great power” speech. Picture that scene, and tell me you don’t want me to shut up so you can go watch the show already.

Oh, and the pirates’ secret password to identify themselves? A reference to the classic (and amazing) Space Pirate Captain Harlock.  Not gonna lie, nerdgasms were had.

**All of the above shows can be viewed on Crunchyroll except Eureka Seven AO and Steins;Gate–AO can be watched over at Funimation’s website.**