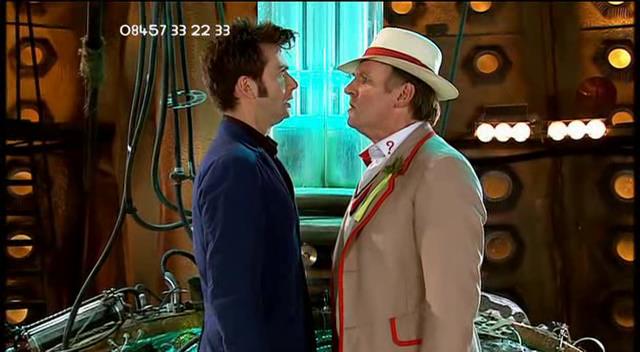 Time travel, synonymous with DeLoreans, Terminators, and confusion. Many have tried to defining the rules and scenarios involving messing with history, and we still don’t get it. Theories get proven wrong, cause and effect work in completely different ways, and people who should disappear with an aborted future (*coughJohnConnorcough*) still breathe. Time travel is complicated and messy and, well…complicated. Especially in Doctor Who.

The “Time Crash” mini-episode is created especially for the Children In Need charity. It involves two principles of time travel. One is that multiple versions of the Doctor (a role played by many different actors over the years) can meet in time and space. In this case, the Fifth Doctor (Peter Davison) meeting the Tenth Doctor (David Tennant). We’ll get to the second in a bit.

David Tennant goes above and beyond as the Tenth Doctor. He does some serious hero worship, rattling off those obscure, personal quips in machine-gun fashion. Peter Davison, in contrast, plays the perfect stumped actor, overwhelmed not just by Tennant’s glee but with the accuracy of those personal facts the Tenth Doctor shoots. The chemistry between them is infectious; I was bouncing in my seat over the back-and-forth exchange.

Now, the second point I mentioned. While distracted, the Tenth Doctor unwittingly hurdles his TARDIS into the Fifth Doctor’s version of reality. This is bad. The presence of two TARDISes sets off a chain reaction that will destroy the universe. Everything is doomed…until the Tenth Doctor works some TARDIS magic and sets everything right.

The Fifth Doctor confronts the Tenth on his solution. The Tenth merely replies that he knew what to do because he remembered being the Fifth Doctor, watching his future Tenth incarnation do the right procedure. “You only knew what to do, because I saw you do it,” the Fifth Doctor realizes.
Thus the conundrum. The Tenth Doctor knew how to solve the problem because he remembered being the Fifth Doctor, watching his successor execute the solution. It didn’t come to him naturally. It was born from the paradox as old as time travel itself: if the Doctor hadn’t caused the TARDISs merge, then he wouldn’t have caused the catastrophe that triggered the two Doctors meeting, and the experience wouldn’t have existed in the first place. Like the snake eating its own tail, the problem and solution are born out of the cyclical nature of the time event. It’s an anomaly that shouldn’t exist, yet against all the laws of physics, does.

Time travel. We think we know everything about it, when in reality we’ve barely scratched the surface. Instead of figuring it out, let’s instead appreciate the comradery between two legendary actors playing roles for a worthwhile charity. The audience will have just as much fun as the actors clearly do. That’s enough for me.

If you enjoyed Michael’s piece, you can find the rest of his work right HERE on Sci-Fi Bloggers. You may also subscribe to his YouTube channel by clicking right HERE or check out his personal blog over HERE.