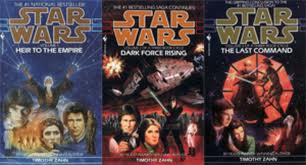 Hello Expanded Universe, and tons and tons of sequels, prequels, and retcons.

I have a little bit of a confession to make.  I really, really like the Star Wars Expanded Universe.  There, I admitted it.  I will concede that not every example of the EU has been a shining example, but there is one part that stands on its own tier.  I am of course talking about the Thrawn Trilogy by Timothy Zahn, the three best books in the entire EU.  Here’s why I love them and so do many other fans.

The Thrawn Trilogy is set several years after The Return of the Jedi.  The Rebel Alliance has essentially won, and is now known as the New Republic.  Most of their attention is spent on securing the worlds they do have and mopping up the various warlords who have split up parts of the Empire after the Emperor’s death.  In this period arises the greatest threat to the New Republic: the last of the Grand Admirals, Thrawn.  That’s the overall background of the story. 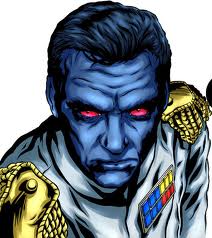 Intelligent, cultured, sophisticated, and capable of kicking your ass four times before breakfast.

Grand Admiral Thrawn is basically the greatest military mind in the Star Wars Universe.  He’s brilliant and often has the New Republic on its toes trying to keep him at bay.  The most interesting thing about him is that he’s an alien, a Chiss.  The Empire for those who don’t know was hugely human-centric and made life for none-humans very difficult.  This guy impressed the Emperor enough to become one the highest ranking members of the Imperial Navy.  He’s kind of a badass.  Also, he makes it sort of okay to root for the Empire.  He’s not the genocidal or oppressive leader that Darth Vader or the Emperor was.  He’s charismatic and seems to genuinely care for the people under his command.  He’s just doing his job, fighting for the Empire.  And an Empire under Thrawn doesn’t seem too bad.  It’s implied in later works that he would have been the leader the galaxy needed during greater threats.

Besides Thrawn, the series introduced a few other important EU figures such as Talon Karrde, a smuggling kingpin, and Mara Jade, a former servant of the Emperor and future wife of Luke Skywalker.  In essence, these books affected just about every piece of EU that came after.  It completely revitalized the EU in a way no one expected and turned Star Wars into the literary giant that it is today.

The books are extremely well written and highly entertaining.  They’re not particularly deep or poignant, but they’re good, fun reads.  Timothy Zahn is an excellent writer and I recommend him to anyone else who likes good sci-fi.

Overall, the Thrawn Trilogy is the best example of EU literature.  They’re considered by some to be the unofficial Third Trilogy.  Hopefully if they ever make more Star Wars films, they adapt these.  I’d love to see them on the big screen.