One of my favorite movies is the 1985 dark comedy about bureaucracy gone wild, Brazil. In what other movie could you see a character be literally buried by paperwork? The director, Terry Gilliam (the only American born member of the Monty Python comedy troupe, he has since renounced his American citizenship) has always been a reliable source of films with unorthodox narratives. Not surprisingly, almost all of his movies gain traction with people following their initial releases in theaters. Following Brazil, Gilliam went on to make The Adventures of Baron Munchausen, The Fisher King, 12 Monkeys, Fear and Loathing in Las Vegas, The Brothers Grimm, Tideland, and The Imaginarium of Doctor Parnassus. Each movie provides an inventive means in which the story is told. Even at his most disappointing (The Brothers Grimm, and I’ve never really liked Fear and Loathing in Las Vegas), his movies are never boring. 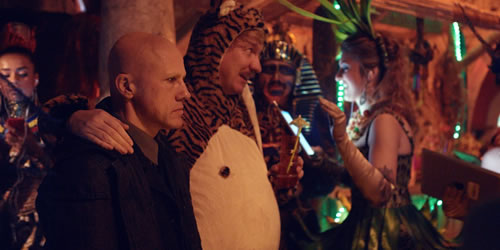 This year he is releasing a new movie starring Christoph Waltz (hot off is second Oscar win for last year’s Django Unchained) and Matt Damon. The movie is called The Zero Theorem. Christoph Waltz stars as Quohen Leth, a computer genius holed up in his home trying to come up with a formula to determine whether there is any meaning to life. Matt Damon plays a shadowy figure known as Management, who always seems to be getting in Leth’s way of producing such a formula. Not much else is known right now except that the movie is set in the future, but my interest is surely piqued.

If the film keeps in line with the same zany satirical tone that made Brazil such a treat, we are definitely in for something special when The Zero Theorem hits theaters this December. If you haven’t seen Brazil, I highly recommend you check it out (the original cut, without the film-murdering happy ending). It is easily one of the best movies of the 1980s. The Zero Theorem looks fantastic and has the potential to be one of the best of the year purely based on its premise and the talent behind it.