Michonne (played by Danai Gurira) is shown walking in the woods with chained walkers as camouflage. She hears screams and sees Andrea (played by Laurie Holden) being attacked by walkers but ignores the screams and walks off.

Michonne and Virgil (played by Kevin Carroll) arrive on the island; his slow progress in finding his family frustrates Michonne but later makes her suspicious. Virgil takes Michonne to the graves of his family, saying that the ‘others’ came and brought violence and sickness, which killed them; they’re reanimated inside a building and he needs Michonne to help put them down. Virgil draws the walkers to them but Michonne kills them all, then later his family who are reanimated and hanged in another room. Virgil suggests getting the weapons Michonne needs in the morning. Michonne goes searching the building and hears voices; Virgil accuses her of ‘ruining it’ and locks her in a room. The next day she talks to the people in the next room who explain a fight broke out over food and Virgil locked all those people (and unknowingly his family) in the building where they either died and/or turned. 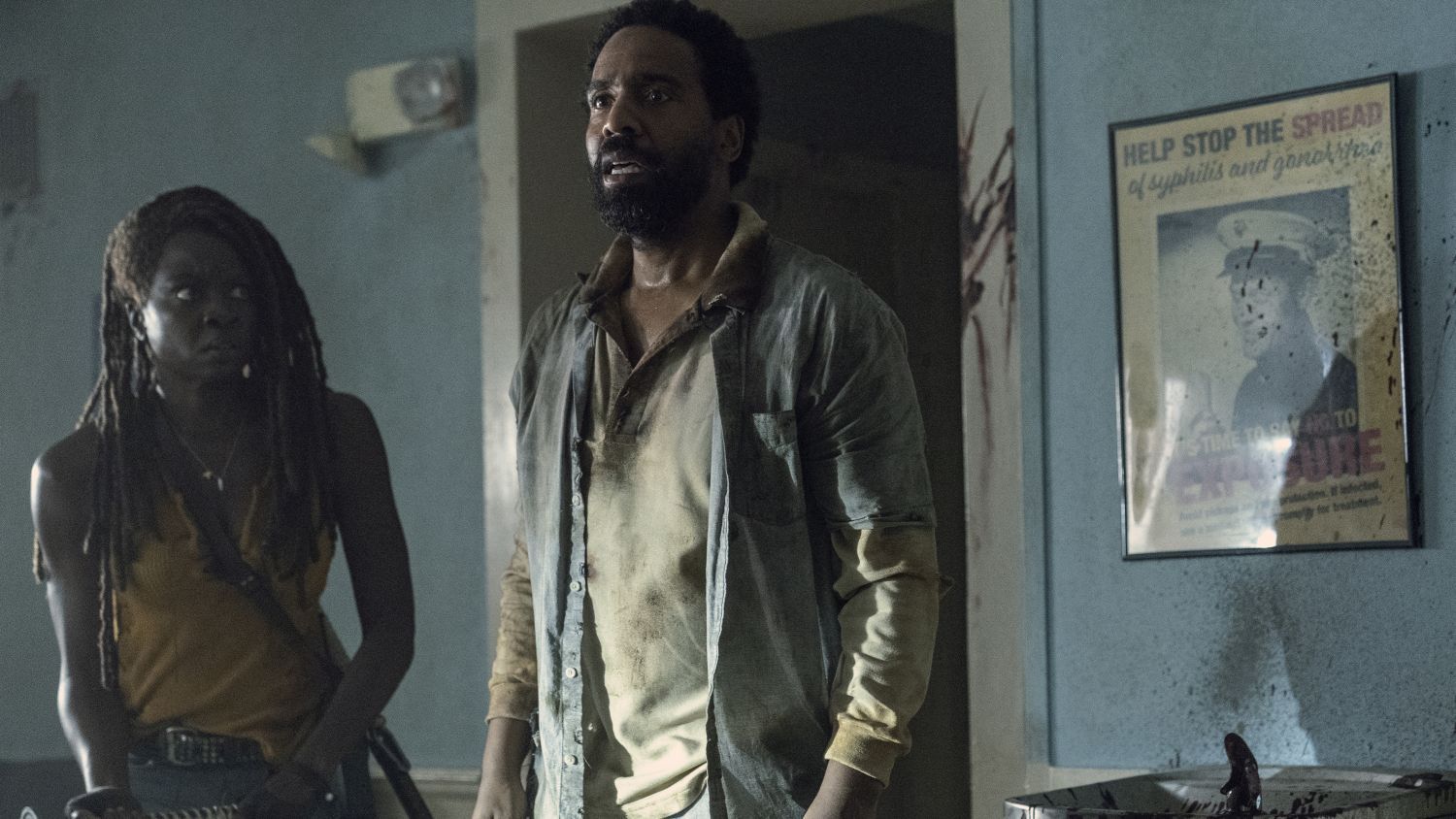 Got to watch out for that one.

There was a lot that happened in the last episode, but it was time to check in on Michonne, especially since she’ll be leaving this season (if you didn’t know that you’ve been living under a rock). Michonne must be desperate to get weapons to fight the Whisperers because she ignored the glaring signs that something was wrong with Virgil. Even if you attribute it his mourning the loss of his family, Michonne is usually more cautious; she made it almost too easy for Virgil to trap her. I think Michonne related to Virgil’s loss through her own personal experiences and that blinded her to the danger. The Andrea cameo was a major throwback, and completely out of place at first glance (of course it makes more sense later). And it’s crazy to think how far the series has come since Andrea was around way back on season three.

Virgil thinks Michonne is in pain like he is and drugs her tea; she hallucinates Siddiq (played by Avi Nash) who blames her for his death. The scene shifts back to Michonne in the woods picking over Andrea’s torn apart corpse for supplies. She then pictures Daryl (played by Norman Reedus) leaving her on the side of the road while she begs for a ride. She then finds herself surrounded by Negan (played by Jeffrey Dean Morgan) and his Saviors, initially attacking but ending up recruited. Michonne pictures herself among the Saviors during Rick’s (played by Andrew Lincoln) raid on their base and when Negan confronts them. It ends with Daryl taking her down with an arrow and Rick putting a bullet into her head. When Michonne comes to, she attacks Virgil; he runs, and she frees the other captives but finds her boat on fire. They capture Virgil but Michonne talks the others out of killing him and instead he’s locked up. Michonne confronts him after searching for weapons and finding none, Virgil claims he thought there were weapons. He is also addicted to the drugged tea as it let him see his family and thought it might do the same for Michonne. 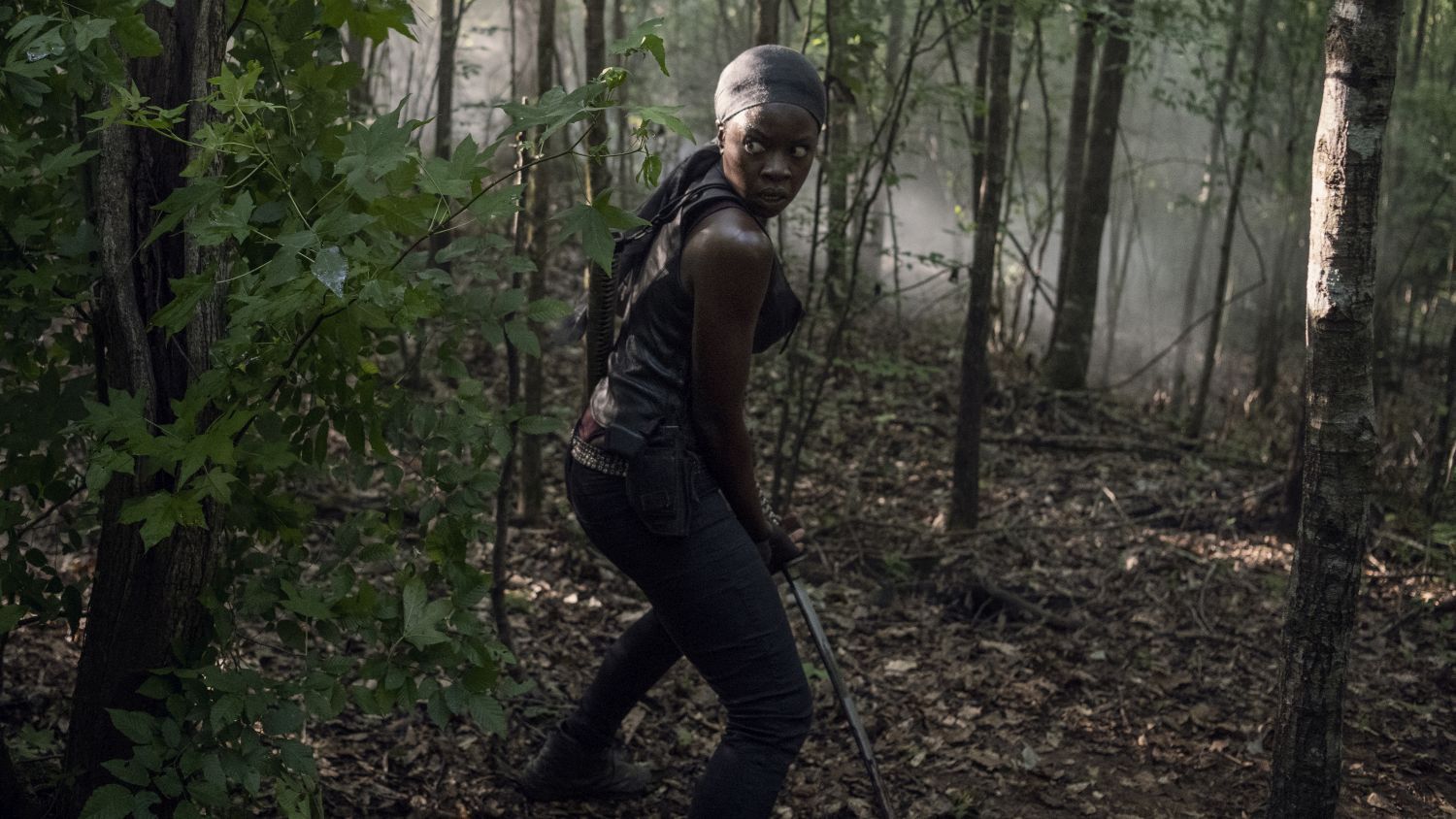 Michonne’s drug trip was like a demented clip show for the bizarro version of the series. Basically, if Michonne had never saved Andrea, she would have continued her solitary path and wound up joining the Saviors, only to be killed by the man who in another life was her husband. I loved the idea of getting an in-depth look at how drastically Michonne’s life could have been changed because of that one decision. Honestly, I want to see a miniseries that follows Michonne’s alternate life (even though the ending was shown here). It was very chilling to also see so many characters brought back with Michonne on the other side and now a villain. Although, the other point is that the ‘villains’ are whoever you don’t end up joining with first; if I were a Savior, I’d have viewed Rick and the others as villains if they killed my buddies in their sleep. Virgil, on the other hand, found the tea to be a way to live out a shell of a life with his dead family. Michonne has her personal demons and was able to relate, which is why she fought to keep Virgil from being killed.

Michonne, with a tied up Virgil, searches a room and spots a pair of boots the remind her of Rick; Virgil takes her to a boat that washed up on the island and finds a drawing of her and Carl carved on a cell phone screen and realizes Rick is alive. Virgil swears he doesn’t know anything about it but offers to fix the boat with help from the others so Michonne can search for him. Michonne and the others set sail; Virgil remains despite the offer to join them. Michonne contacts Judith (played by Cailey Fleming) on the radio and finds out that Alpha’s (played by Samantha Morton) horde was mostly destroyed. Speaking in code, Michonne relays that Rick may be alive and Judith urges her to find him instead of returning to Alexandria first. The last scene shows Michonne with pet walkers in the woods, finding two people who claim ‘they’ won’t wait for them and decides to help them reach their people.

One and done; this turned out to be Michonne’s send-off episode as she’s off to find and save Rick. Once she had that information, we knew she was going; Michonne only has a sliver of hope that it’s true, but that’s enough. I can’t believe that it was all a coincidence, though; Virgil finds the boat, finds Oceanside, and gets Michonne to the island; but, maybe, just this once, it really is just a coincidence. Either way, Virgil will spend the rest of his days alone on that island with his drug tea and some pseudo-happiness (God help whoever winds up there, though). I’m also confused as to whether the last scene was another Michonne daydream or she found a lead to Rick that quickly. Either way, it ends the episode on a good note; it’s either a visual way of showing Michonne picked the right path or she’s on her way to finding Rick; a great way to send Michonne off the show.

“I’m not much on saving people on the road, especially those that try to take my head off.”

Was Judith lying to Michonne about the horde being destroyed so she would leave, or was that a time jump?

We’ve now lost Michonne; if Daryl’s character gets written off in any way people will riot.