Carol (played by Melissa McBride) and Maggie (played by Lauren Cohan) are shown being captured by Negan’s people. Their leader, Paula (played by Alicia Witt), keeps them prisoner while deciding what to do about Rick (played by Andrew Lincoln) and the others.

They’re tied up and taken to a safe house and overhear Paula radio for other Saviors to come help. The building is full of walkers and Paula and the others hide in the cell with Maggie and Carol. Maggie’s pregnancy seems to keep them from doing much harm while Carol makes herself appear feeble and weak to throw them off. One of their crew was injured by Carol and is slowly bleeding out and Maggie encourages them to do a hostage trade with Rick for their man but Paula ignores her. When he demands retribution in attacking Carol and Paula refuses, he attacks, but Maggie and Paula subdue him. Carol and Maggie are then separated and interrogated for information on Alexandria and where it is. The woman interrogating Maggie is missing a finger for stealing from her leader before and reveals she used to be pregnant (explaining her soft spot for Maggie). Rick radios again to ask for a trade but Paula refuses and instead prepares to fight them. 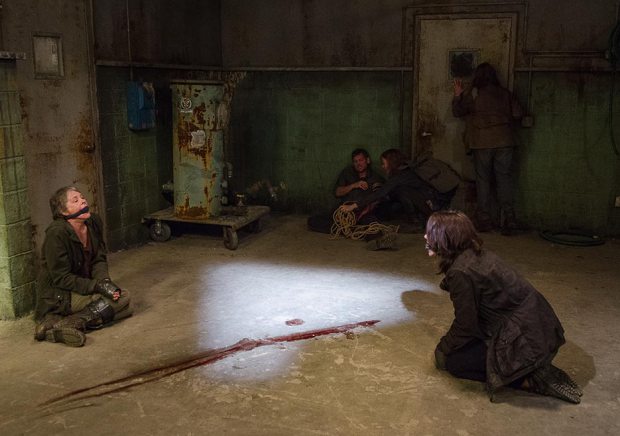 The narrative takes an interesting perspective, focusing solely on Carol and Maggie’s capture and not on the attempts to rescue them. It’s fresh because most storylines like this are about the people on the outside mounting a rescue mission. Maggie and especially Carol are two of the most capable people on the show and watching them fight to rescue themselves is a more compelling story. And bravo to Carol for pulling off the scared religious woman ruse. In another life she could have been a badass spy. Keeping the action within the compound also allowed for some character development with the latest Saviors; well, mostly Paula (also the only one explicitly named). The threat of a larger conflict keeps brewing with the revelation that the Saviors are a much larger group than previously thought and they know about Daryl (played by Norman Reedus) blowing up some of their members before. I think the Saviors are much closer to Alexandria than they realize and it’ll be a much worse assault than the Wolves.

Paula goes into detail about her life before the Outbreak, losing her husband and children and murdering her old boss (the first of many people) to stay alive. Carol confronts Paula and says she is afraid to die, and she calls Rick to make the trade. But when there is no static over the walkie Paula realizes Rick and the others must be close and are planning to attack. The group prepares to move out and Carol uses a cross she found to free herself and rescues Maggie. They find the injured man dead and allow him to turn so he attacks one of the others and Maggie uses the distraction to kill the woman. They try to escape but find walkers blocking their path and Paula confronts them but runs out of bullets. Carol refuses to kill her and is almost bitten. In the confusion, Maggie has her stomach cut by a knife and Carol puts down her attacker. Paula distracts Carol and attacks but Carol shoves Paula onto a spike and a walker tears her face off. 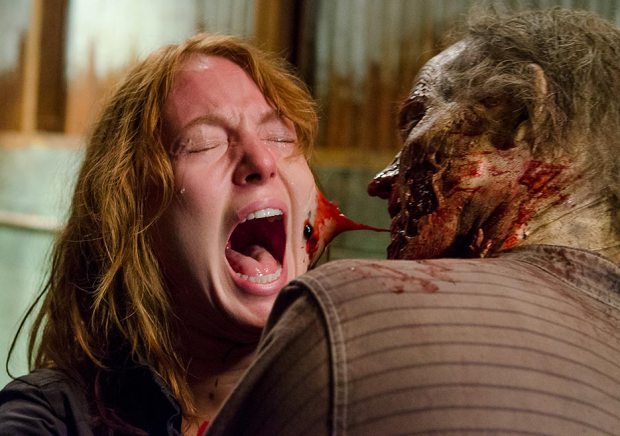 Paula and Carol are a lot alike. If they had met under different circumstances they could have been apocalypse besties killing walkers and baking together. Carol trying to spare Paula could mean that Morgan’s (played by Lennie James) philosophy is rubbing off on her. I hope not because I prefer warrior Carol to a pacifist, let’s-talk-things-out Carol. What I think happened is Carol saw that, without the family support she has from Rick and the others, she could have became as cold and calculating as Paula. Whereas Carol keeps track of all the people she killed, Paula doesn’t bother counting because she no longer cares. Meeting Paula did have an effect on Carol because she was all for escaping. Instead it was Maggie who insisted they stay and slaughter everyone. This episode was great for the emotional growth of Carol but she better not lose the edge that fans love about her.

Carol confides in Maggie that she’s killed at least twenty people, but Maggie says it was all justified. When the other Saviors arrive, Carol locks them in a room saturated with gasoline and lights it on fire with a cigarette. Maggie and Carol exit the building and run into Rick and the others who had arrived to save them. The man Rick captured claims to be Negan and Rick shoots him without hesitation. Rick and the others were too late for a change and they looked a little disappointed they missed the fight. That guy obviously wasn’t Negan and that’s going to leave Alexandria open to an attack now that they think he’s dead. Carol’s kill list just got bigger. She tried to disassociate from the people she killed but sooner or later it catches up to you. She’ll need to find an outlet for those feelings or it’ll consume her.

“You’re some kind of stupid for getting knocked up at a time like this.” “When was it ever smart to get knocked up?”

The entire episode the Saviors kept saying they are all Negan, so on top of everything else this guy is some kind of savant cult leader.

“I’m not planning to die today.”

These saviors are like spy-villain henchman: they’re easy to kill and there’s a seemingly limitless supply.