Alpha (played by Samantha Morton) has Negan (played by Jeffery Dean Morgan) whip her arm in a display of overcoming pain before doing the same to him. Later Negan is given his own Whisperer mask and helps Alpha, Beta (played by Ryan Hurst), and other Whisperers lead a group of walkers.

Eugene (played by Josh McDermitt) continues his radio flirtation with ‘Stephanie’ and pushes for them to finally meet; she decides to talk to her people about it but stresses he keep it secret. But things go south when Rosita (payed by Christian Serratos) hears ‘Stephanie’ over the radio and blows up Eugene’s spot, but she later encourages him to go find her. Daryl (played by Norman Reedus) and Lydia (played by Cassady McClincy) arrive at Hilltop and warn them Alpha is coming. Daryl attempts to evacuate the children but finds the roads blocked and the scout’s dead; Daryl deduces Negan is now with the Whisperers. Unable to get reinforcements in time from the other communities, Hilltop prepares to fight. Carol (played by Melissa McBride) learns about Ezekiel’s (played by Khary Payton) tumor and they reconcile. Gamma/Mary (played by Thora Birch) tries to reconnect with her nephew but is prevented by angry Hilltop residents despite Aaron’s (played by Ross Marquand) vouching for her. 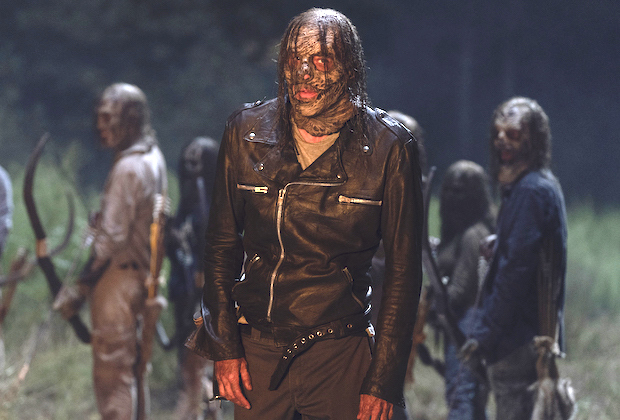 There better be a huge payoff to Eugene’s long-distance love thing, aside from him getting a girlfriend, which, who cares really? Likely a new group the main characters can interact with, although that’s more of a problem given how many characters are already on our screens (but if some die in this Whisperer War there would be room for new ones). But all the time dedicated to Eugene’s ‘relationship’ could have been spent on more interesting stories, like Carol and Ezekiel making up. His tumor was a big deal, however, long ago it was first mentioned and now it’s a passing thing. Carol knows, and they get together no scene elaborating on it. Mary’s hostile welcome to Hilltop should have gotten more screen time; she’s barred from seeing her only family in her nephew and these people seemed close to attacking her. I’m sure it’ll be picked up on in a later episode, but I wanted to see more of that conflict over Eugene’s love problems.

Negan meets with Alpha and tries to convince her that although killing them would be good, getting them to surrender and join them would be better. Carol attempts to apologize to Lydia, as well, while promising to kill Alpha, and bond over their shared grief and loneliness. Eugene sings a song over the radio to Stephanie and she sings back, eventually giving him a location and asking him to meet her there in a week. Daryl and Ezekiel make a plan that if one gets hurt or the situation becomes too volatile the other will evacuate the children. Judith (played by Cailey Fleming) is determined to fight but Daryl refuses to let her; she admits fearing losing her family in the upcoming fight and gives him a handmade leather vest for luck. Finally, Carol apologizes to Daryl, who accepts as they join the others outside the gates to prepare for the incoming horde. The horde is briefly stopped by electrical wire set up around Hilltop, but it collapses under the weight of the walkers. 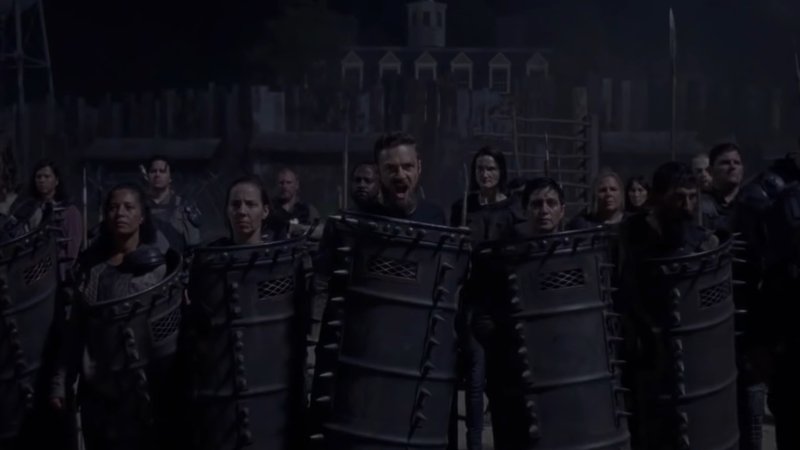 I don’t know if it’s because of his new relationship with Alpha, but Negan’s Whisperer mask looks amazing; the Joker smile cut into the sides makes it so much scarier/epic. It’s understandable that, with a big fight on the horizon, people want to settle things but there were too many scenes of people working out their issues. The scene with Daryl and Ezekiel especially felt forced, like they wanted a chance to put these characters together because they never really interact. Daryl even mentions how they never really talk, which makes the scene feel forced. The scene with Judith and Daryl was surprisingly sweet; she’s not shown much but Judith is one of the more intriguing characters. What will also be interesting to see is if Negan has lingering attachment to the communities; for now, he seems all in with Alpha but his suggestion of mercy stems from genuine concern from them (at least I think so. We’ll see).

As they fight, the walkers begin to break through their ranks; suddenly, Beta has Whisperers launch bags of gasoline into the area. Negan questions if Alpha changed her mind about having them join her; she says they can join them as part of her horde. Daryl tries to lead everyone back inside Hilltop but the Whisperers fire flaming arrows that block the entrance with a wall of fire.

The opening of the Whisperer War closes out the episode and it’s clear it’ll be a take no prisoners fight; loved Alpha saying they can join her in death, this lady is all business now. As bad as it looks at the end of the episode, the usual people will likely be safe, but it’s time we lost some supporting characters. After all, this is a war and casualties are inevitable but we all know people like Carol or Daryl are going to be safe.

“You should hate me.” “It’s hard, when you seem to hate yourself so much.”

The design for Negan’s walker mask came from a mold of Norman Reedus’ face; I love it even more now.

Is it wrong that I’m kind of hoping Eugene is being catfished? That would be a twist ending.