A flashback shows Carol (played by Melissa McBride) freeing Negan (played by Jeffrey Dean Morgan) on condition he kill Alpha (played by Samantha Morton), reasoning it will help endear him to the people in Alexandria. In the present, Carol mounts Alpha’s head on a pike but refuses to go back to Alexandria yet; forcing Negan to hold off going back, fearing nobody will believe what he did.

At Rosita’s (played by Christian Serratos) urging, Eugene (played by Josh McDermitt) tells everyone about his radio talks with ‘Stephanie,’ which isn’t received well at first. But he leaves to find her with Ezekiel (played by Khary Payton) and Yumiko (played by Eleanor Matsuura); Ezekiel’s health problems almost get him killed by walkers. Negan goes to free Lydia (played by Cassady McClincy) but is attacked by Daryl (played by Norman Reedus) who doesn’t believe Negan killed Alpha. Beta (played by Ryan Hurst) finds Alpha’s head. When a Whisperer claims Beta the new Alpha, a furious Beta forces the Whisperer to be bitten by Alpha’s head. Walking through a town, the Whisperer moves to kill a walker for Beta. But Beta stabs the Whisperer. He then takes up inside a building with Alpha’s head. Inside posters reveal he was once a country music star, but he destroys them all in a fit of rage; later playing a record to attract walkers. Carol walks through the woods haunted by a vison of Alpha, who taunts that nobody will forgive Carol for putting them in danger for her revenge. She plans to head out on her own, but, while in an abandoned building, gets buried under rubble. 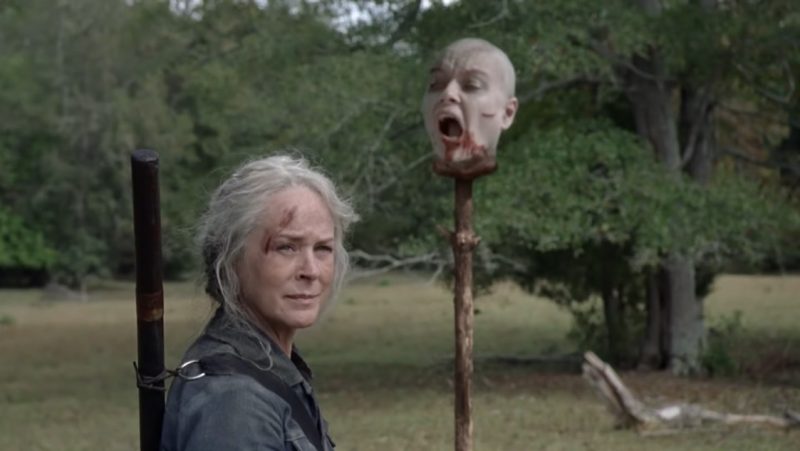 Eugene tried to spin his conversations with Stephanie as finding new allies, but, let’s be clear: this is a blind date. Hopefully, it could lead to new allies given Ezekiel may literally die trying to get there. But would another community want to join up considering the problems with the Whisperers? Love the shade of Carol putting Alpha’s head on a pike; and leaving Negan was cold, knowing someone like Daryl would never believe him without her. To be fair, trying to say he kidnapped Lydia for her protection was never going to sound good. Carol carries a lot of guilt, which generally gets manifested in dead characters talking to her. Great way to bring back characters for a cameo, though! Beta forced that Whisperer to get bitten. He was going to die and instead of revenge he moved to protect Beta. Beta must have serious clout amongst the Whisperers. And, apparently, a great voice. I kind of wanted at least one flashback of Beta as a country-western star but the story doesn’t really need it.

Negan takes Daryl to where Alpha’s head was but finds it gone. Before Daryl can kill him, Whisperers show up and declare that since Negan killed her, he is the new Alpha and bows to him. Daryl is tied up as Negan gleefully gloats and forces him to kneel, reverting to his old persona as leader of the Saviors with ease. But after taking a shotgun off the Whisperers, he kills them all. Ezekiel asks Eugene and Yumiko to leave him behind if his illness slows him down, but they refuse. The next day Carol remains trapped and a walker begins to approach as Alpha continues to taunt her, saying it’s for the best as more people like Daryl could die if she goes back. Alpha tells Carol to “look at the flowers,” but a defiant Carol breaks free and kills the walker. Negan and Daryl wait, hoping Carol will show up, and Negan admits he liked feeling respected when he was among the Whisperers; but says he couldn’t stand by killing people who don’t deserve it or children. 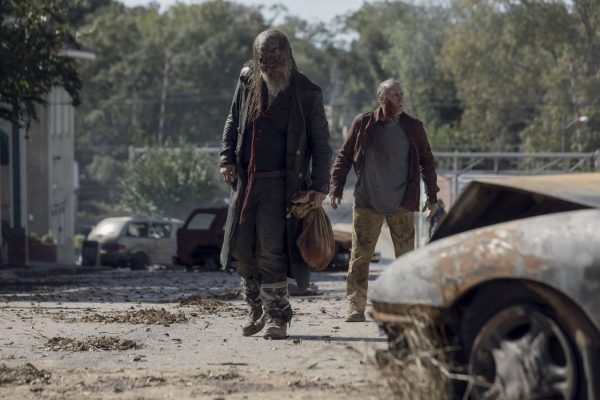 I loved seeing Negan with his old swagger, dictating to the Whisperers and being the head honcho again. He obviously just wanted to mess with Daryl, but, for a second or two, I’m sure he did seriously consider the offer to be Alpha. But the Whisperers live in the woods and Negan doesn’t seem like the camping type of guy. And while I guess I applaud his motto of not killing children, his idea of who “deserves” to be killed is murky considering the people he’s killed or ordered killed. That “look at the flowers” reference was such a throwback (even now that scene still gives me chills). That whole scene was about Carol trying to forgive herself, which, if she hasn’t, I’m sure she will soon. But, really the question is: will everyone else forgive her? Carol has made a habit of going rogue for her own vendetta’s and, as much as they love her, people won’t forget that and may not forgive it that easily.

Daryl and Negan decide to head back, and, sure enough, Carol eventually makes her way to Alexandria. Eugene, Ezekiel, and Yumiko make their way to a city. As they move through the streets, they find an armed and enthusiastic woman who greets them. After tearing his own mask, Beta puts down Alpha’s head and uses it to fashion a new mask. He then steps outside and leads the now-massive horde of walkers to an unknown destination.

We all knew Carol was going to come back (the show can’t afford to lose another fan favorite so soon after Michonne left). This new woman doesn’t sound like the mysterious Stephanie; she seems like one of those hyper and happy people, which, for me, would make me wary. Beta has moved past grieving and is ready for some revenge. The Alpha ghost’s predictions of Carol’s actions leading to someone else she loves getting killed looks to be coming true.

“Just look at the flowers, like you’re supposed to.”

Carol will never look at flowers the same way again.

“When Alpha took me in, I admit it, I liked it. It was nice feeling like I mattered again, like I was respected. But she took it too far.”

If that girl does turn out to be Stephanie, she’s clearly too much for Eugene to handle.