As a long-time, avid fan of the incredible Stargate franchise, it is quite shameful for me to admit that I did not stumble upon Stargate Universe until its cancellation was announced. Initially, I was unsure whether or not to watch the series upon learning this information. But after finding season one at my trusty, local DVD Store (and on sale, I might add), I decided to give the show a chance. And I was not disappointed.

From the numerous reviews that I read on the Internet prior to watching the new incarnation of the franchise, people either loved Stargate Universe or hated it. There was no middle ground, and this still seems to be the case today. A number of fans of the franchise constantly threw around complaints such as ‘it’s too dark’ and ‘it doesn’t feel like the other Stargates’. These are definitely legitimate complaints, as Stargate Universe undeniably possessed a much darker and serious tone compared to ‘Stargate SG-1’ and ‘Stargate Atlantis’. But is this a bad thing? In my opinion, no. 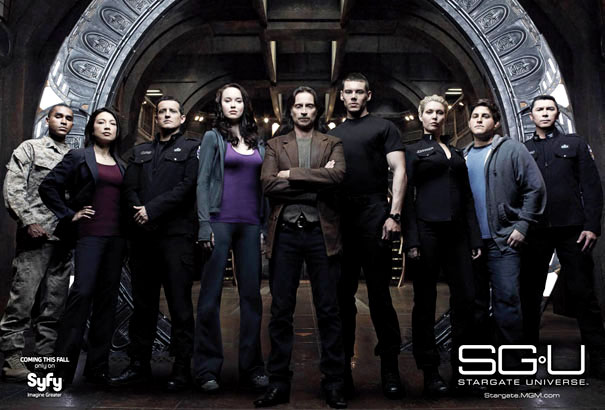 In the show’s three-part, three hour pilot, viewers were introduced to a Stargate unlike any of the others. With the other incarnations being about discovering new worlds and encountering aliens, Stargate Universe was ultimately, from the very beginning, a show about survival and humanity. Unlike, Stargate SG-1 and Stargate Atlantis, it provides a unique insight into the human condition, perfectly chronicling the struggles of a small, unprepared group of people after a rebellion organisation attacks a secret off-world base. As they are left stranded aboard the ‘Destiny’, the show follows their numerous attempts at returning back home to Earth.

Despite this being a very interesting and entertaining premise, what stands out as the show’s greatest strength is the characterisation of each individual character, even the secondary ones. They are not simply good or evil, black or white. These are characters that have a much more realistic and human feel to them compared to the ones of SG-1 and Atlantis. In fact, the way the characters of this series are written, with their flaws and believable motivations, is something that other television shows can learn from. Viewers are unable to identify a character as either good or evil, but are capable of identifying both the good and bad traits each character possesses. Additionally, the show is successful at portraying the animosity between various characters, especially Colonial Everett Young and Dr. Nicholas Rush. However, this difference, which seems to have generated so much discussion amongst the Stargate fandom, is what makes the show its own.

At the end of the day, with such an interesting premise and beautifully written, three-dimensional characters, it still continues to confuse me as to why Stargate Universe was cancelled. Personally, I think it is unfair, as the show had so much potential. It seems to me that because it did not follow a similar format to the previous incarnations, people are often quick to judge and dislike it. Instead of the evil aliens being the direct source of conflict, Stargate Universe uses the motivations and the internal struggles of the crew to move the plot along. I strongly believe that if the series had not been associated with the Stargate franchise, then this show would have probably received a third season.