Vasiliy (played by Kevin Durand) becomes disheartened after losing the battle of Central Park. He and Abraham (played by David Bradley) decide to put more focus on finding and incapacitating the Master.

Ephraim (played by Corey Stoll) plans to use the black box from the plane that originally brought the Master to New York to isolate and silence his way of communicating with Strigoi. He, Dutch (played by Ruta Gedmintas), and Quinlan (played by Rupert Penry-Jones) set out to JFK to find it. Vasiliy takes Abraham to his parent’s apartment, and is devastated to find that they committed suicide after becoming infected. They later go into a looted shop and Vasiliy uses dynamite to break into the safe while recounting his difficult relationship with his father. While driving through Queens and witnessing the savage conditions, Ephraim and Dutch attempt to help a father and daughter being attacked. Quinlan objects to this, but swiftly kills the attackers. Eldritch (played by Jonathan Hyde) attempts to board the ship he helped bring to New York and learn what’s on it, but is denied.

Learning can be gross.

Eldritch is like the member of the popular kids who gets mistreated by everyone and never really was made part of the group. Vasiliy’s father only appeared in one brief scene back in season one, so once that was recapped in the ‘previously on’ segment it was clear they were goners. They couldn’t have survived this long and their deaths were meant to show a more emotional side to Vasiliy. This is something we rarely see, and it gave the character who’s usually more comic relief some depth. No matter how many times I hear Ephraim explain his plan it still makes no sense, and honestly seems like an excuse to give them a mission for the episode. Seeing how people have descended into Lord of the Flies mentality outside of the safe zones is another visual foreshadowing that New York will fall—likely very soon.

While walking through JFK, Ephraim laments that they could have stopped the spread of the Strigoi if they had first listened to Abraham. They eventually find the plane’s black box. Eldritch is confronted by Eichhorst (played by Richard Sammel) about his visit to the boat and reminds him that he has no real power. In retaliation, Eldritch gathers a team to take the boat by force, but find the crew dead and the cargo hold empty. Interspersed in the episode are flashbacks to 1941 Ukraine during Eichhorst’s time as a Nazi commander, where Vasiliy’s grandfather was a prisoner and forced to execute prisoners deemed no longer useful. Vasiliy tells this story to Abraham as they use the contents from the safe to build a silver box to contain the Master. This brings him and Abraham closer, and Abraham convinces Vasiliy to forgive his father for everything in the past. 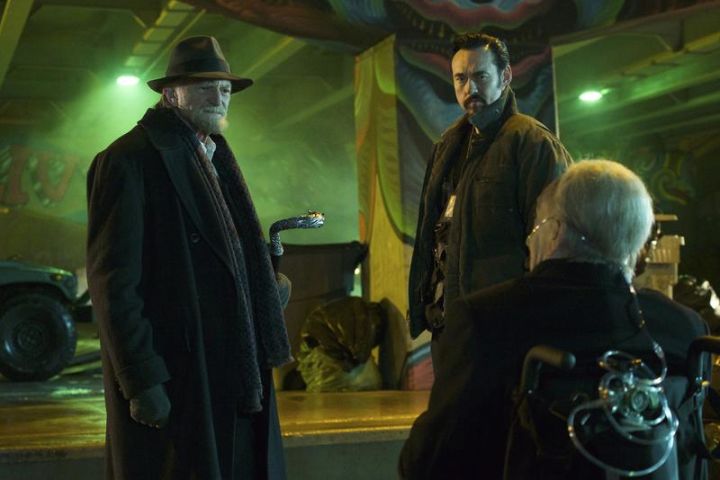 Deal with the Devil.

Eichhorst seems less threatening with only one hand. Maybe that’s why Eldritch decided to stand up to him (too little too late though). The flashbacks were great, and it’s always cool seeing Eichhorst as a human psychopath. However, it was odd that they were focused on Vasiliy’s grandfather and not Vasiliy and his father. He goes on about how deteriorated his relationship with his father became and lists examples of past fights. We should have seen flashbacks with Vasiliy and his parents; it would have made the impact of their deaths resonate more.

Abraham and Vasiliy meet with Eldritch, who tells them about the boat and tries to barter the formula for the white in exchange for more help. He’s given only a single dose and Abraham confides in Vasiliy that he thinks the boat contained the other three Ancients who may have joined the Master. Eldritch takes the white, and, after a brief seizure, he begins to regain his health. Eldritch came to the table with basically no information, Abraham has the worst inside man ever. We already have three Ancients who don’t speak or move and now we’re getting three more, it would be nice if we got treated to villains who are actually threatening in some way.

“Civility is an illusion, savagery is the default state of humanity.”

I wonder what the plan is to trap the Master. Leave a tasty treat under the box and pull on a rope?

“Your job is not to tell me what I cannot do, but to help me do the things I need to do.”

This episode was just filler as we head into the season finale, maybe it’s better there are only ten episodes this season.