As an international flight is landing at JFK, a large creature breaks out of the cargo hold and attacks everyone on board. Once landed, the plane loses all contact with ground control and remains stranded on a runway.

Worried about a possible viral outbreak, the CDC is called, headed by Dr. Ephraim Goodweather (played by Corey Stoll). Ephraim and his partner/ex-lover Nora (played by Mia Maestro) enter the plane and find most of the passengers dead by unknown means. There were four survivors, including rock star Gabriel Bolivar (played by Jack Kesy) and hotheaded attorney Joan Luss (played by Leslie Hope). They find a large, coffin-like box covered with skeleton designs in the cargo hold but there’s no record of anyone checking it onto the plane. The box is filled with soil and Nora notices that there is a latch that opens it from the inside. This coffin clearly housed the large creature that attacked the plane and later it attacks an airport official. It drains the man of all his blood before snapping his neck and smashes his head like a watermelon before flying away. 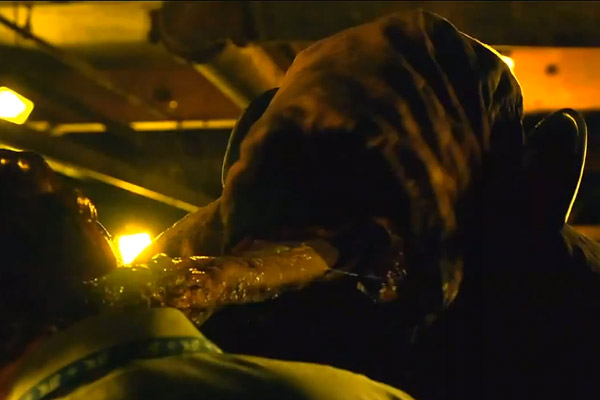 Wow. Talk about overkill. That thing wanted to be 100% sure the guy was dead. This episode had a very strong opening, showing only glimpses of the creature and keeping its motives shrouded in mystery. Since it sucked this guy dry of all his blood, this thing is obviously a vampire and suddenly it’s not looking so good that four people survived the attack. One person is a high-powered attorney and another a famous rock star, which might explain why they were spared and most likely infected. I also liked how several of the main characters were developed really well like Ephraim’s estrangement with his ex-wife and son. We can’t be expected to root for any of these people if we can’t figure out who is likable and who isn’t.

Elderly pawnshop owner Abraham Setrakian (played by David Bradley) arrives at the airport to speak to someone regarding the outbreak. Setrakian has faced vampires before and kept what looked like a vampire organ in his shop (souvenir maybe?). He tries to warn Ephraim and Nora to destroy the bodies and the coffin but is arrested when a silver sword is found in his cane. Ephraim and Nora later find tiny worms mixed with soil from the coffin and realize the worms must have killed the passengers. The medical examiner finds that each body has a small hole in the throat and the blood in each victim replaced with a gooey white substance. Several worms erupt from a mutated organ he was examining but he cuts them out of his arm in time. Unfortunately, all the bodies in the morgue reanimate and viciously attack him. 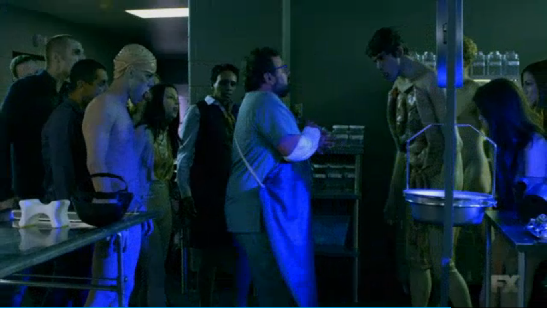 I feel like bodies rising up is a recurring nightmare most medical examiners would have. Setrakian is an old guy but he took down those would be robbers easily, so he must be a badass vampire hunter. I’m intrigued by this new way of turning people into vampires, making it an actual viral outbreak using these worm creatures. It’s cool to see something new in vampire mythology after so much of the same thing in recent years. Clearly, biting can’t be used to turn people since, from what I’ve seen, these vampires don’t just drink a little blood, they drain people. I especially like those Alien-like tongues they use to attack. They make them much scarier than if they were just biting people.

Meanwhile, in East Harlem, recent parole Gus Elizalde (played by Miguel Gomez) is hired by Thomas Eichorst (played by Richard Sammel) to retrieve the coffin from the airport. Eichorst is a vampire (unknown to Gus) and working with an old millionaire (played by Johnathan Hyde) to bring the coffin into the city. Gus is nearly caught but Ephraim’s friend and coworker, Jim (played by Sean Astin), helps him get through as he’s also working for Eichorst. The old man was probably promised immortality for his help and clearly he’s connected to people everywhere. Looks like the vampires want to take over New York City, and that’s actually a pretty smart plan. People in a small town would notice pretty quick if their neighbors started turning into vampires. In NYC, strange things happen daily, so it would go unnoticed longer and of course the population is larger.

That box was so evil looking. It clearly had to be involved. I mean, the skeleton designs alone were a red flag.

“It’s like that just appear out of nowhere? Reminds of marriage.”

Churches in NYC are going to start filling up fast, although I don’t know if that would affect these vampires.