After much speculation, Dwayne “The Rock” Johnson took to Twitter to announce his official casting as Black Adam in the DC Comics universe. Black Adam is the nemesis to costumed crusader Shazam, formerly known as Captain Marvel.

“Kneel at his feet or get crushed by his boot.” My honor to become.. #BlackAdam #TheAntiHero #DCComics pic.twitter.com/Qk55eNf3R7

While it would be nice to see Johnson take on his not-so-typical role as a crazed antagonist, the “Shazam” film has no confirmed plot or production dates. According to Variety, the script will be written by Darren Lemke (Jack the Giant Slayer). It should be noted that in previous years Black Adam has been a corrupt and twisted supervillian. Johnson’s use of the hashtag ‘AntiHero’ leads one to think that the storyline may follow the more current plot of Adam trying to clear his name rather than wreak havoc, perhaps turning into the Loki character of the DC universe.

The sad part of this news is that the world of Shazam is not looking to cross paths with the likes of the Justice League. New Line Cinema’s Toby Emmerich said to expect new things. “The tone and feeling of the movie will be different from the other range of comic book movies.” Emmerich also mentioned, in his interview with Entertainment Weekly, that there will be some fun in the film, which is a welcome surprise to fans who want a DC film that carries a sense of humor. 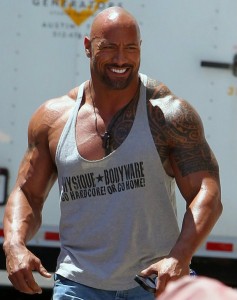 Now the casting of Shazam is going to be tough. Firstly, to have Shazam, you have to have Billy Batson. Billy is the young boy who mutters a magic word and becomes his alter ego with the power of seven gods. It’s hard to find the right child actor, because they need to express a range of emotion and have to be likable. This kid could be part of the DC realm for a few years, so he needs to nail it.

Then, of course, you have to find the perfect fit for Shazam. The actor has to hold his own against Johnson so the titular character doesn’t become a background player. That’s a big job, and it calls for a big man and, hopefully, a great actor. Names like Jake Gyllenhaal, Channing Tatum and Will Smith have been thrown around, and there are even groups hoping that Johnson gets cast in both roles. Perhaps, the only actor that may be able to stand up to The Rock is…The Rock.