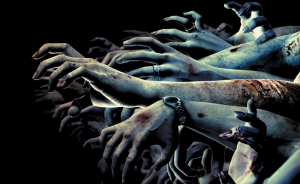 There have been a huge and horrific range of creepy characters throughout cinema history; from the early days of cinema characters such as the famous vampire ‘Nosferatu’, right up to the later re-imagining of classic creatures in the modern teenage vampire love-fests. There are various types and styles of supernatural creatures popping up regularly in modern horror flicks, but none have excelled in popularity as much as the undead zombie.

Since the success of Danny Boyles ‘28 Days Later’, zombie films have been coming to cinemas and DVDs in vast quantity. ’28 Days Later’ re-imagines the classic shuffling, undead, mindless zombie (commonly credited to George A. Romero and his ‘of the dead’ series) as angry, blood thirsty ‘infected’. To zombie fans around the globe, this showed them their favourite horror creatures in a whole new light; with the ability to sprint and viciously beat their pray, the zombie became much more intimidating. This brought new life to the genre and inspired the ‘running zombie’ in the successful 2004 re-make of ‘Dawn of the Dead’.

Most fans of the genre will often credit George A. Romero as the father of the zombie film, his series of zombie films were original and the gore scenes were considered controversial during the release of his earlier films. George’s creepy, shambling zombies certainly paved the way for a plethora of modern zombie films; the hilarious ‘Shawn of the Dead’ incorporates many aspects of the ‘Romero zombie’ (as well as a remarkable similarity to his films titles) into a hilarious tale of two friends on a mission to save their family and friends during a London based zombie outbreak. There are multiple references to Romero’s films including the classic line “We’re coming to get you Barbara!” which only solidifies the fact that the zombie movie is a genre that has an extremely tight fan base, teeming with quotable lines and unforgettable scenes.

To date there are roughly 440 zombie movies (according to  IMDB ) and there are certainly a lot more on the way. But are avid fans with sufficient funding damaging the genre? There are more zombie films being made annually than ever before, and none have stood out as classics of late. It is certainly concerning that the genera is losing its popularity and quality due to the sheer amount of low quality, ‘straight to DVD’ zombie films, and there are more teenage vampire and werewolf movies greasing up cinemas worldwide. Perhaps the reign of the zombie movie has come to an end, or perhaps another quality re-imagining will be enough to awaken a new passion for the undead in the hearts of all loyal fans, only time will tell.