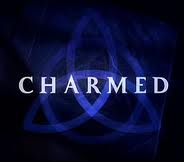 Despite my attempts to keep it a secret, my eventual phase of a teenage pagan comes out of the woodwork every now and again. Not that I am ashamed of it, but the fact of the matter is, it makes me look like a poser. Despite my committment to cold hard research of the New Age section in Barnes and Noble and searching myself for who I really was during the tender ages of 12 to 17, I’ve found passable agnosticism the best religious ideal for me. But during those years like any angry, teenager involved in obscure interests, I extremely defensive of all things Pagan, New Age, Wiccan, and witches. Which made watching my television genre of choice a little difficult. Every show I watched had some horrible inaccuracy, an aspect that made me cringe while watching and shake my head in disbelief at how wrong they actually were. A similar action I’ll have after graduating high school and going back through all my books on the subject. However, now I realize the religious inaccuracies in television shows are pretty common, no matter the religion. And no one should get as worked up over them as they do, especially in fictional programs dealing with fantasy.

Supernatural, Charmed, Buffy the Vampire Slayer, The Secret Circle, True Blood and Sabrina the Teenage Witch all deal with witchcraft at some point or another, or the aspects of Paganism and witchcraft are one of the core focuses of the show. Oddly enough, it is those television shows that make the most inaccuracies. Perhaps one of the most accurate examples of witchcraft in fantasy and science fiction comes from the Doctor Who episode “The Shakespeare Code” because it is simple in its explanation ( the right words under the right circumstance spoken with the right oompf and intentions). Sabrina, obviously gets a slide being a show that bears no resemblance to Wiccan witches and witches in general, but Charmed had to have been the television show based the most in the Wiccan religion and the practices of witchcraft and also was the one who made by far some of the largest mistakes. On message boards I found myself responding to people that the power of three was the fictional adaptation of the rule of three ( whatever you’ll do, positive or negative will come back three times stronger) and how just because you decided to chant some rhyming words and light some incense you weren’t doing a spell. There were times where I spent a great deal describing the intricacies and aspects of magic away from fiction ( the most common being that black magic and white magic are not separate entities, that magic was magic, just a tool, energy, not something with a conscious choice) and how Charmed essentially threw away any pre-established mythology and religion in favor to what would make a good monster of the week. They even have their protagonists kill Hecate, who is the main goddess of witchcraft.  And then I stopped. I devoted a lot of time and effort for years explaining to people why fiction was different than reality, but I realized this did not just apply to Wicca, though it does get the most bastardization, it applies to every religion in nearly every television show. 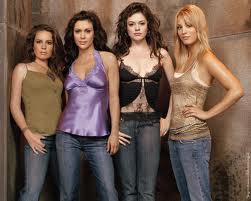 Despite vanquishing demons, they still manage to look pretty. And without stress wrinkles

In Secret Life of American Teenager, the only Christian character spends all her time talking about how because she lsot her virginity, her Dad died in a plane crash and Jesus is wonderful. The same thing happens in Veronica Mars when a girl becomes pregnant and has an abortion, she is harrassed by Christians for her decision. In Seinfeld, all things Jewish are heightened and exaggerated. The only reason Islam is brought up in any television show is  to depict Muslim extremists or a hate crime at school.  While Wicca and other neo-Pagan religions certainly get the award for most misrepresentation in popular culture, whether it is in books, television, or films no religion is accurately represented in television, mostly because if writers were to depict any actual religious person, it would not be too exciting and there would be no drama because most religious people tend to keep that shit to themselves. They couldn’t be bothered with your back alley abortions or inability to keep Kosher at the sight of bacon. They are too worried about taxes or other grown up stuff like DOW and water bills.

The reason paganism gets such a large misrepresentation and is largely  inaccurately portrayed in television is because it is one of the few religions that few people know about and it kind of leaves itself open to it. When the focus of your religion or your spiritual practices ( All Wiccans are witches, but not all witches are Wiccans) is based in spells, magic, and the making your will be done there are going to be writers to use that to their advantage, especially in the fantasy and science fiction genres. After all, there tends to be a lot of overlap between modern day witchcraft and fantasy story elements. Witchcraft is a centuries old practice and the focus of many different fairytales and religious stories- it lends itself to be adapted into a story about female empowerment through magic and kicking demon ass because that is what fantasy deals with, exciting elements, fantastical elements, whether that be demon, vampire, or witch. 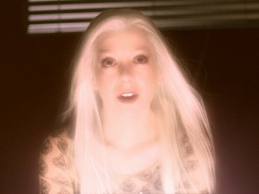 Now, when I did a spell my hair didn’t do that. Depending on the season I either got really cold or a lot of mosquito bites.

What any person who practices witchcraft, or who is part of the Wiccan religion has to understand is that there religion is not the only one to be protrayed wrongly, or inaccurately on television, it is all religions. But since so few people really know what happens and what are the core beliefs of these spiritual endeavors, theya re going to come looking for answers to their questions with an inaccurate knowledge based in the pop culture they first experienced it in. I did, and then someone who actually practiced cleared it up for me. A little harshly, but still Iw as better for it. I understood what the religion was now about, what it meant, what spiritual depictions of witchcraft mean as opposed to the fictional ones, and I was better for it.

So the next time a modern day witch bitches about someone not understanding their religion, how it is bastardized by television and pop culture alike- they need to realize that it is not just them, and if someone comes to you with misinformation it is your responsibility to point them in the right direction. Not gripe about it on the internet…oh wait.