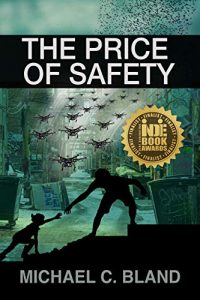 The Price of Safety Is More Action Than Sci-Fi

The Price of Safety is a book full of good ideas but is plagued by sloppy execution. Very quickly in the reading, it was apparent to me that this was a book that loved its technology, and had an in-depth understanding of engineering and science, but had a lower grasp on how to present human characters.

This is especially apparent in our main character, who, probably by necessity, is knowledgeable enough in technology to explain some frankly rather believable future devices. Problem is, he presents his internal emotional monologue with boring shallowness or a little too unchanging of a cadence.

Now, he’s presented as an everyman and yet an important genius, so that would make sense to a degree. But he is only sort of presented as a man with flaws. He’s overprotective, but completely logically so—and it’s not really a flaw. The flip-flop between a person way over their head and someone who changed the world is a jarring one. The book seems to want to lean into the former, the normal relatable character angle, but by the time the book is almost done he’s capable of handling gunfights, on-the-fly technological solutions, and gets over grief too easily.

This is further compounded, though, by the necessity of the genre. This is a “chase novel,” as I’m fond of calling them. They have a few stable moments, in the beginning, then continue to keep the characters running from some pursuer. It’s common in “teenagers with powers” books, but it’s here, too, and boy does it strain the concepts of pacing after a while. 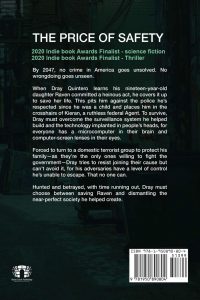 Sure, the plot justifies it, but for a book this long, there’s just so much running and fighting and dealing with moments of havoc. Sometimes they manage to avoid some danger, then run into another within a few pages.

You could call it pacing, I call it being too fast. I call it exhausting. Quiet moments don’t help terribly, though. The characters don’t really have enough interlocking personalities for that. It’s mostly just mother-daughter, husband-wife, and especially child-dad. The young rebel couple has a fun dynamic but is vastly under-explored. There’s just not enough meat for them to have a moment and for it to not come across as stilted. The only big exception is to set up a tragic death, which is almost cheating.

Now, let me be clear here because I know that I’m saying a lot of negativity: this novel has some cool ideas. It took me forever to get there because The Price of Safety is too long, but there are moments where the concept of government surveillance and the control of the population works excellently narratively and satirically and thematically.

Further, the last few chapters are actually incredibly strong bits of fiction because of this understanding of evil. Small pockets of just how terrifying the ability to monitor and influence people when they willingly have implants in their heads hits harsh and gloriously. The author has a knack for presenting what horrible and creative things such technology can be used to do.

I wanted more of this unique dark spice.

I wanted more drones, more bio-creations, more inventive modes of influence. This book could have been a lot more focused on the satire and the mind-games, and it would have been stronger.

Now, before I wrap up, I do have to acknowledge that this is not my genre of choice. It’s an action thriller, even if it seems to not always think it is. And, for those that enjoy a not-too-complicated main character who acts as a conduit for increasingly complicated and technologically insane fights, then you might enjoy this book more than me. I’m willing to acknowledge that maybe just a continuous stream of chases and then slow moments before more chases is a template that might keep the average reader quite entertained.

But I thought this was going to be something like Black Mirror or 1984, when the more accurate comparison is a Jason Bourne movie or a very nerdy and less charismatic version of James Bond.

If you want to indulge in paranoia fiction and popcorn intrigue, this might be just the book to pass a few hours. If there is a sequel, despite this post, I may be interested—only because The Price of Safety improved so much in the last fifty pages.