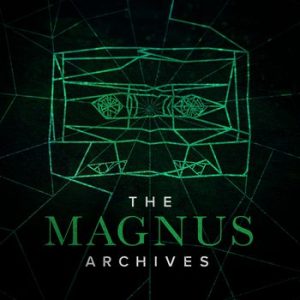 More People Need To Know About The Magnus Archives

I slept on The Magnus Archives for far too long, considering how much praise I was exposed to beforehand. I suppose my general dislike of podcasts as a storytelling method (never been much for audiobooks) was what deterred me. But that was completely and utterly dumb.

Because The Magnus Archives is fantastic. No matter your stance on audiobooks, I implore all fans of horror to try this podcast. But, since this is a review, let’s examine why this podcast is so good, so scary, and as effective as it is.

The first thing of note is that the premise is just really clever. The idea of an organization that studies the paranormal is not even remotely new, but the twist of having someone attempt to deal with the utterly chaotic archives of such a place and modernize it makes for a framing device that is immediately organic and understandable. The mismatch of timeline, of concept and subject matter, is justified by the disorganized nature of the conceit. Further, because it’s implied or stated by the narrator—despite this almost certainly not being the case—that a lot of the stories are not fully accurate or maybe entirely hoaxes, they have even further wiggle room to explore any type of horror story.

There Was A Lazy Option – They Did Not Remotely Take It

But the brilliant thing, and this is a slight spoiler if you go in blind, is that they don’t do that. Some stories, more than you would expect, are interlocked, and even the likely one-shot stories still maintain a consistent tone/subgenre.

And that subgenre is mind-melting Lovecraftian cosmic horror. It’s one of the hardest subgenres to write well but is pulled off with mastery here. Cosmic horror thrives on unknown and withheld information, and though occasionally details seem completely random to keep that vibe alive, the series doles out information that’s just enough to get the mind racing. I’m not one to be easily frightened by horror concepts, but I can state, emphatically, that nearly every episode left me chilled, disturbed, or completely unsettled. Even the ones that didn’t leave me staring forward into space, trying not to scream in a public setting, had a fascinatingly creative or introspective baseline that still left it enjoyable. I can’t guarantee it will scare you, but it’s top-shelf stuff.

The Magnus Archives Has So Much To Offer The Horror Genre

But there’s always something when reviewing. Despite me having perhaps found my new favorite podcast, I do have to criticize one or two things. The biggest issue I noticed, and perhaps it’s handled later in the series, is that they seem to be using the same audio tricks in nearly every episode. The Magnus Archives utilizes an underlying creepy instrumental that becomes more intense at points in the story where it has ramped up in terror. Sometimes, and this bit is clever, they drop that sound out where you would expect it, to give this eerie too-quiet feeling. But, having binged a lot of episodes in preparation for this review, it is noticeable. I doubt someone doing one a day, or once a week, would even pick up on it, but it was enough to knock out my immersion for a few seconds each time.

The other thing that detracts, but there’s no way around it, is that they have one main writer and one main voice actor. The people the narrator is narrating for are a myriad of different people, at different ages and genders and life experiences, and they can become somewhat blurred into one—albeit brilliantly done—voice. Despite different affectations (which don’t make sense in-universe, but that’s just the nature of the medium) and attempted writing tricks to make the characters distinct, there’s often a slightly homogenous aspect to the perspectives inhabited. But, again, there’s only so much that can even be done to fix that kind of issue—it’s not like they can hire a staff of hundreds of different voices.

Make no mistake, The Magnus Archives is one of the best horror franchises I’ve ever had the pleasure to come across. It’s imaginative and skillful. Don’t deprive yourself of it as I did.