EDITOR’S NOTE: Keep a lookout. Our review of Batman v Superman will be up soon.

As I wandered around SXSW this past week I found myself anxiously looking around for the guys from Telltale to spill the details on their newest venture. As a fan of all things Telltale I was psyched to learn that they were taking on one of the most iconic figures… Batman.

The exciting event, entitled Batman: The Telltale Series, will premiere sometime this summer. At the panel discussing the game the producers and writers reassured that the story is the most important part of the Telltale game, so there wasn’t much to show. However, you can check out the announcement trailer which premiered during this year’s Game Awards.

It sounds like the series will heavily feature Bruce Wayne over Batman and players will be able to choose (at some point) between characters in certain situations. Telltale also stressed that the game will be pretty intense and not as PG as the teaser appears while still appearing in comic book style. It’s also worth noting that the episodes will take place in present day without ties to previous Batman games, films or comic storylines.

The group shared the title page to the script of episode one of five. Again they are letting the fans know that this is still an extremely story-heavy venture and while we don’t know what villains Bruce or Batman will encounter we do know that some old favorites will show up like Alfred Pennyworth and Jim Gordon. 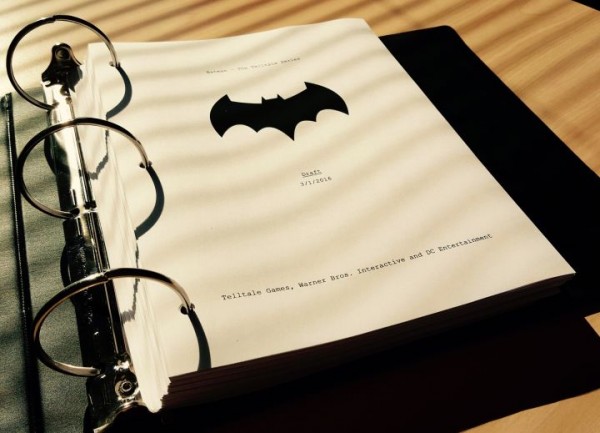 Currently the series is still shrouded in mystery but it will be interesting to see how the studio retells the classic story of the caped crusader. What will the suit look like? Who will show up? Who will voice Batman? Do we have to watch Mr. and Mrs. Wayne die again? If you’re interested in following the game’s progress then you can subscribe over on Telltale’s website here.