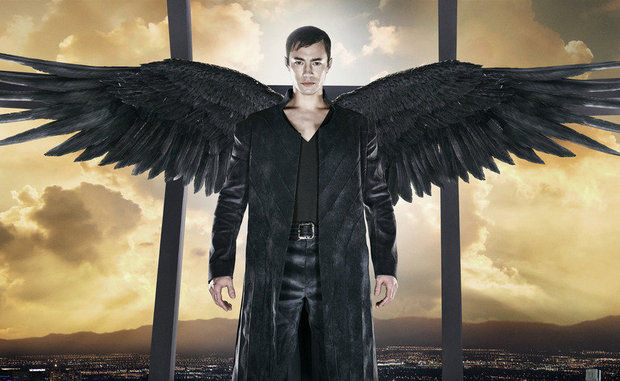 Every day since Saturday, I’ve woken up like this:

“GAGDASKFJSGATRLJGNHJGSNFNGFLKBMMDNSJF ORPHAN BLACK IS ALMOST OVER!!”

But there’s hope for tomorrow, everyone!

On Syfy, Dominion has finally arrived. I’ve been waiting for this show to premier for months, and now that it’s here, it’s almost everything that I imagined. I say “almost” because the guys could be hotter, but they’re okay. I was expecting a few more six-packs. That’s not to say I won’t fall in love with someone (probably Michael) around mid-season-ish.

DISCLAIMER: As a woman (and a pseudo-feminist), I reserve the right to scrutinize men for their outer appearances, so shut it.

Anyway, to the episode! 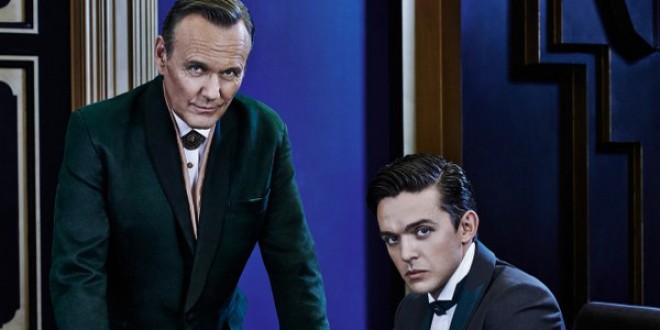 The pilot starts off with a BANG! Viewers are thrown smack-dab in the aftermath of a debilitating war with angels. Yeah, those dudes who are supposed to have our backs on high are really trying to slice and dice us up now. The show picks up 25 years after the movie, Legion (2010), left off.

Sidenote: While it is not vital that you watch the movie to understand the show—you are missing absolutely nothing because the creators do pretty well with filling in newbies and refreshing oldies—you will want to see Legion. It was perhaps one of the best films of 2010, starring Paul Bettany, Lucas Black, Tyrese Gibson, and more. If you ain’t there, get there.

So, God is gone. Dude just left, abandoned us completely because…um…well, we kinda suck, so archangels Gabriel (Carl Beukes) and Michael (Tom Wisdom) had a big blowout (called the Extermination War) to fight over the human race. 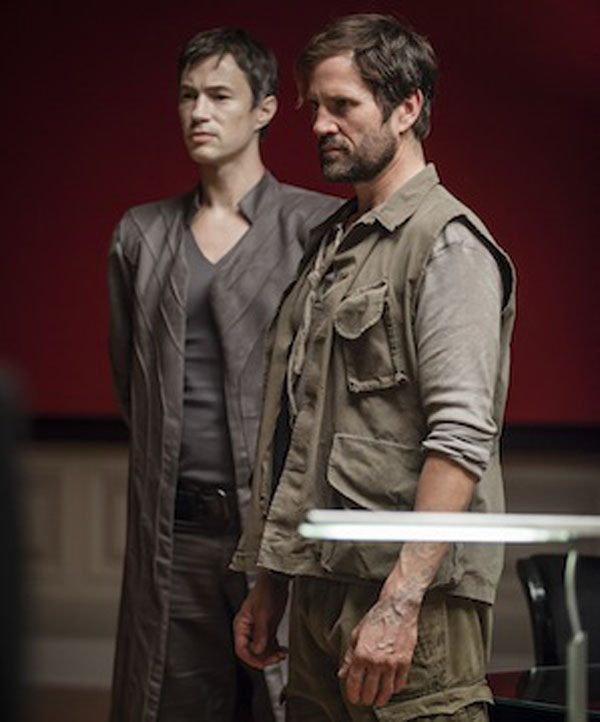 Michael is Team Sapien, and Gabriel wants to completely annihilate us. Lower level angels that lack a form are able to possess the bodies of weak-willed human beings (referred to as 8-balls…no, I don’t know why…must be some Vegas gambling association) and attack us I Am Legend zombie-styled with a quickness that is no joke.

With little agitation from the crazy killer angels, everyone believes that Gabriel is dead and that the angel army has given up. Come on, guys, too easy. Human populations reside behind the protection of fortified walls under strict leaders, but they’re not living on easy street since the fighting has stopped.

In the city of Vega, aka modern-day Las Vegas, a rigid caste system has formed with number classifications, leaving those at the bottom of it nearly destitute and starving.

The protagonist, Alex (Christopher Egan) was abandoned by his father, Jeep (Langley Kirkwood), and therefore placed at the bottom of the totem pole. Jeep leaves him in the undisclosed care of Michael, who was unable to outright care for Alex because, well, he’s not human, and also that could’ve led to the suspicion that Alex was the Chosen One (if you didn’t know that…stop doing crack and go read a book).

Humans keep hope alive that mankind’s savior, the Chosen One, will be their champion in a final battle with the angels. For now, Michael, who could never come close to the general hotness and attractive stoicism (especially shirtless) of Paul Bettany in Legion, is their sole guardian (because the soldiers relatively suck), and what a lonely job that is! He spends most of the episode brooding and—oh my God, he looks just like Keanu Reeves. Yep, that’s it. He’s baby Keanu Reeves. He has a…relationship (?) with Senator Becca Thorn (Rosalind Halstead), both harboring strong feelings for the other that they don’t seem to want to acknowledge. I mean, she has orgyies with him, so that’s gotta be love…or at least some strong like. I wanna join. But I don’t know. Women play power positions in this series. Take Arika (Shivani Ghai). She’s the wife of Queen Evelyn of the city of Helena, a distant land that holds some heavy political and economic weight. However, Arika is very much her own woman, using her surfboard to ride on whomever she sees fit. 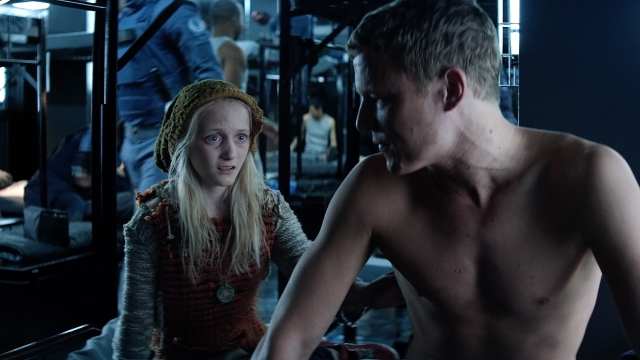 Back to Jeep. He was off trying to decipher the strange tattoos that appeared on his flesh when he assumed the position of guarding Alex (he’s not his biological father—you’d know that if you’d watch Legion). Long story short. He don’t know nothin’. Gone for FIFTEEN years, and he still don’t know nothin’, except that Gabriel is alive. He brings video footage  that proves Gabriel is off building an army of painfully badass warrior angels in a fortress that looks like Loki’s summer vacay castle in the mountains of Colorado. Be afraid.

Like many great sci-fi stories that wanna reel in the chick audiences (yeah, I’m one of them, so what?), there’s a pair of star-crossed lovers hanging out in the center. Alex Lannon (Christopher Egan), a young soldier at the bottom, falls in love with Claire Riesan (Roxanne McKee), who’s basically new world royalty. Of course, the lovers get a sharp blade thrown in their idyllic hearts when they plan to run away and get married.

The problem: timing. If only they had jetted sooner. General Riesen, Claire’s father (Alan Dale), is thinking of retiring, but there’s a greedy snake hoping to slide into his position, the power-hungry David Whele (Giles from Buffy, or Anthony Head). He hopes to gain control over Vega through a marriage between his son, William (Luke Allen-Gale), and Claire. William is kind of a creeper. He’s one of those zealous religious sorts with buses of followers and yahoo, he’s actually in love with Claire, who, in my opinion, is a little basic even in her really cute red dress, but it’s always these types that get guys in shows, like Sookie from True Blood. 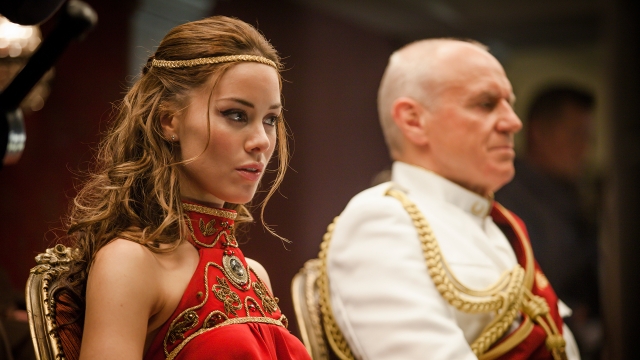 Anyway, on the night that Alex and Claire plan to run away is the Vega Jubilee, a celebration to commemorate not getting wiped off the face of the Earth by angels. The Jubilee is set up like a gladiator-Olympian-Roman-esque thing with the main attraction being a captured 8-ball that David thought it’d be a good idea to show off. Stupid.

Vega is under attack by four super-angels with nothing to lose and killer-sharp wings. Everything is in chaos as the city’s leaders, the visitors from Helena, and Alex with his emaciated little friend, Bixby are holed up in a safe room. Michael is off fighting by himself to save everyone. What a freaking burden, like somebody go help! It’s your city! Ya jerks! Then, there’s an explosion, and Vega loses power again.

Michael rises from the debris along with the super-angel he was fighting, Furiad. Furiad gave him a slimy smile that could’ve said, “Next time, hoe. Next time,” or, “Oooh, plan was success.” 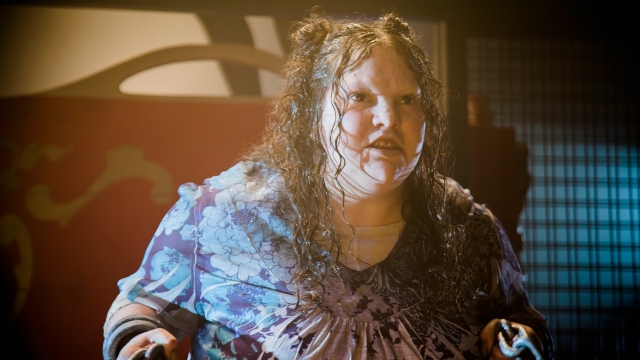 Back in the safe room, a kid with the Helena visitors was actually an 8-ball in disguised, and he stabs Jeep with a butter knife, killing him. Eh. Can a butter knife do that much damage? I wanted something cooler, but anyway, he’s dead. The tattoos on his body are transferred to Alex, and Jeep announces that he’s been the Chosen One all along. Oh my God, he’s like Harry Potter, the Boy Who Lived.

Later on, Michael asks Alex if he’s able to read the tattoos, and a message appears: Beware of those closest to you. Well, Jeep should’ve died a lot sooner or kept his but by Alex’s side because clearly, the tats weren’t meant for him. Alex tells Michael that he doesn’t, and now we’re all wondering if something happened to Michael out there when he was fighting Furiad. If Gabriel did some kind of switcheroo with him, then how would he know to acknowledge Becca and tell her he was okay when he returned to the bunker?

Also, we see William meeting up with a group of angels outside of the city. So, he’s the bad guy. I knew he played too coy.

Was anybody else shocked by the butts on Syfy though? A little risque for them, don’t you think? Also, girl soldiers shower with guy soldiers, and there are roaming eyes? Interesting… *sidelong glance*