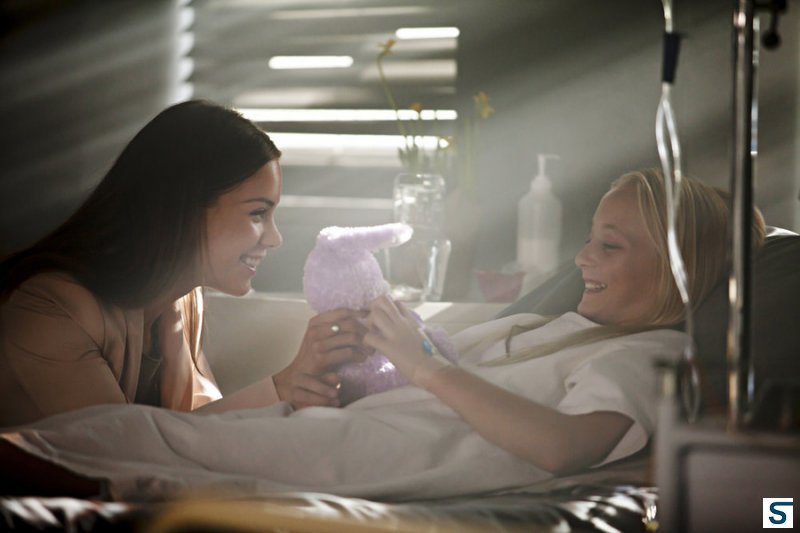 The site is currently being occupied by Count Spatula and his vampiric utensils. This being the case, the team and I have been doing everything we can to retake what’s rightfully ours. It is our sincere hope that this transmission of a regular sci-fi piece manages to break through their jamming technology.

We last left off with Alex rushing Michael back to Vega after he was fatally wounded by Furiad. Now, I don’t know about you, but I think it’s safe to say we can bet on Michael surviving until the end of the season, so I wasn’t very worried. I was surprised, however, by the way he was saved. Some person in all black healed his wounds with the juice from an angel feather. Becca stayed by his side the entire time, and after two episodes of barely anything/nothing at all, we finally got to see them be all lovey-dovey again. She even dropped the L-bomb on us! Michael looked almost devastated. I love that brooding, depressed, guilty thing he does, like he’s fighting an addiction when it comes to Becca. You know what? I think I ship Michael with everyone: Alex, Gabriel, hell, even Ethan, who is easily the most likable person out of everyone. I mean, I really like Becca too, but I have this foreboding sixth sense that she’ll die this season (we’ll talk later). 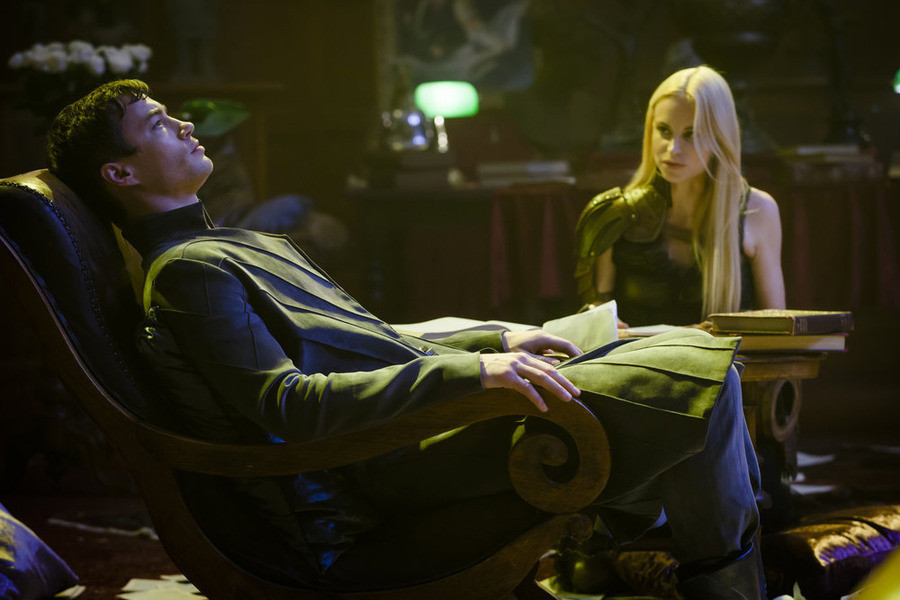 Anyway, there’s a new archangel in town by the name of Uriel. She wrangled her brothers together to have some fiery sibling arguments and we got some decent sized dirt. For starters, what is Michael’s “colorful past?” Also, why does Gabriel think Alex’s destiny is with him? I thought he wanted to kill Alex. Is that not the plan anymore?

At first, I suspected it was Gabriel who saved Michael, but now that Uriel has been introduced, I think it might’ve been her. During the episode, Uriel stressed that she just wants peace between the two. I wonder if that’s why she’s playing both of them, promising her allegiance to each of them on different terms. I’m just inclined to expect some great things from her because I googled “Archangel Uriel.” She’s humanity’s link to the spirit world, a catalyst for creativity, thoughtfulness, the mental plane. She’s also the archangel that encourages unconditional forgiveness. I don’t know how close to that Dominion is going to get, but all of those things mean that she’s smarter than both of her brothers, and she’s come up with a way to manipulate them to get what she wants. I suspect she’s going to be my favorite female character on this show—well, until we finally get to meet the all powerful gangsta, Queen Evelyn of Helena.

One good thing came out of Michael’s injury: it did drag Alex’s butt back to Vega. He was arrested the second he dropped Michael off with the doctors—deserting duty. When he was going through admittance in jail or something, I guess, he was beaten up by the guards because he wouldn’t undress (the tats, you know). While in his cell, Alex had a vision of the tattoos rinsing off of him into a puddle of water where the words “SHE DIED FOR YOU” formed. He was awakened by Claire. I just don’t like her. Can’t put my finger on it, but there’s nothing that interests me about her. 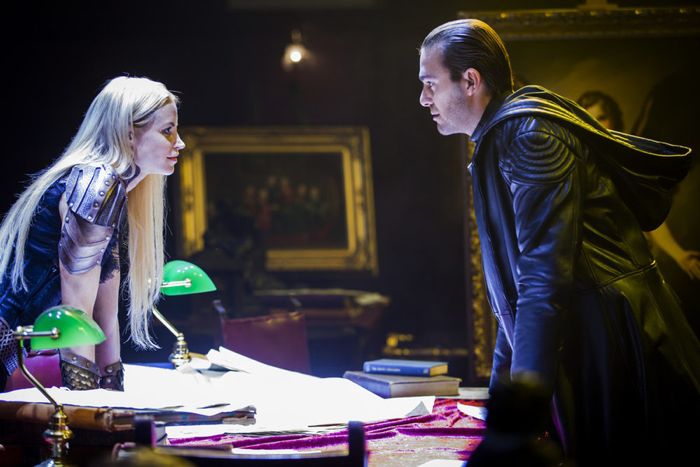 Bixby told her that Alex was back, so she had him released against his wishes. It was that same conversation between Claire and Bixby that set into motion a sequence of events that led to two dead bodies. Senator Frost overheard them, acknowledging the Chosen One’s identity.

Frost, who was an engineer, took it upon himself to hold Riesen and Giles—I mean, David—hostage in Vega’s agricultural tower. It houses not only the city’s entire supply of grains and food, but also the irrigation system that Frost rigged to be manually controlled by his smartphone (yes, apparently there are some things we just can’t give up in out post-apocalyptic world). Frost wanted to speak with the Chosen One. He believed Riesen and David were corrupt with power, so much so that they are prolonging the Chosen One’s destiny.

Everyone panicked, obviously. No one knew that Alex was the Chosen One  yet, so Frost looked like he went off his rocker. Claire and William were temporarily promoted to their fathers’ positions on the Senate to aid them in voting on a solution. They decided to send in the Angel Corps, but Claire thwarted the plan by allowing Alex to go in. She actually sounded pretty cool when she gave an executive order to the Angel Corp lieutenant, but eh, don’t like her.

David was shot in the leg, but before things got really bad, Alex barged in to reveal himself as the Chosen One for the first time. Huge step for our cowardly lion. Frost immediately thought it was a trick because Alex is on the lower end of the V-system and a soldier. He wanted proof. Alex recited the message he saw earlier in his vision, and it actually made sense to Frost. His daughter died so he could live. Too bad he didn’t make it to the end of this episode. The second he let his guard down, Riesen shot him in the head.

What sucks the most about this whole situation is that Frost wasn’t sipping the crazy juice. His method was a little extreme, but was it worth the death penalty? And the surprising thing was that Riesen shot him. I totally thought David was going to do it. I guess Riesen is more like David than I originally thought—power hungry. I’m just not okay with unnecessary killing. 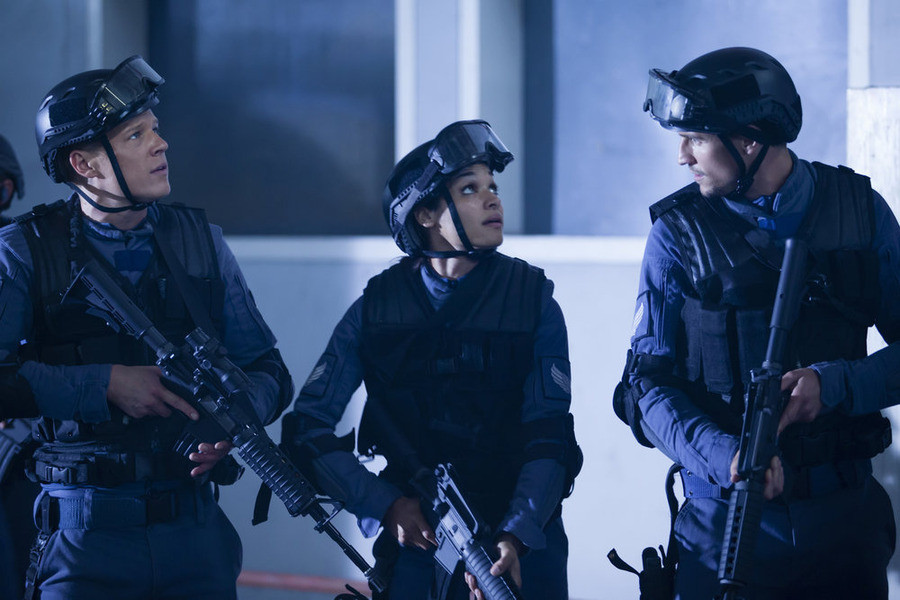 Liked Bixby. Did David really have to kill Bixby? She was just a child. Her poor little life didn’t even get a chance to crescendo; it just kind of skated around the bottom. What I want to know about are those monitors. Why weren’t they hooked up to the nurses’ station? Why was there seemingly no one on duty? Bixby isn’t the first person to die during the night, so it seems plausible that you keep a couple nurses on standby. Plus, that monitor was loud! Weren’t there people in that room with her in the other beds? Nobody heard? Nobody? What the hell, man? She didn’t have to die. You know what it is? David missed his quota. He has to kill at least one person per episode, so Bix was a last resort. Really sucks.

At least David got served some sass again this episode. No, not from Arita, from a highly unlikely source: William.

Best Line This Ep: “Alex Lannon, he’s the one destined to save mankind, not two old men past their prime.”

And then, William placed David’s bottle of bourbon right in front of his face, far enough away that David had to get up on his hurt leg to get to it. The sass. Then, he twirled out of the room like a boss.

Elsewhere, Alex agreed to accept his destiny and learn from Michael. This is just hot. I guess Michael’s going to teach him how to fight 8-balls (because currently Alex sucks at it) and maybe how to meditate to tap into those visions at will. Next episode looks amazing. More Malex for my fandom. Expect only pictures of them next article.

Oh, and Becca has that piece of Furiad’s blade that wounded Michael. She was studying it with a microscope. I really hope it wasn’t for David. It had better not be for David. I will jump in that TV, and bitchslap her across Vega if she’s even thinking about betraying my favorite archangel.