I was ill-prepared for D.C. Super Hero Girls. While I know that, among some nay-sayers, cartoons can be considered a little too fast, a little too manic, and exhausting to watch—I’ve never really found that to be the case.

Except for this show really is absurdly fast. The intro, the very first scene in the entire show, is like having a sugar rush smash you in the face. I could not help but find myself talking quicker after an episode, as all the characters—even the shy one—go at a clip that’s jarring. The character that’s been designated as the quick-talking one—an ice cream parlor worker and more—talks literally too fast to understand without subtitles.

And that’s the sad part: the plot structure and the ideas in the show are actually pretty clever. In the very first episode, Batgirl shows that she’s got some genre savviness by using a food fight to easily get the superheroes into detention, and in one place. That’s interesting, and not something I’ve ever seen directly acknowledged before—not even by other genre-savvy media. 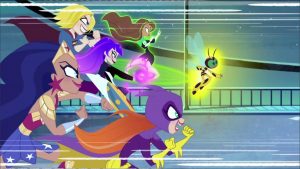 And that’s not the only spot where they clearly gave a good chunk of thought to things. The characters, though incredibly tropey, have a good degree of personality and fun visual gags based on logic regarding their powers. Supergirl can punch through anything, and her treating the world like tinfoil sometimes makes for a lot of humor. Additionally, the timeline is not in step with the usual, but there is a clear timeline, and doesn’t lose the character’s usual history completely, or at least as far as I know regarding their comic book origins. That is except for Batgirl being friends with Harley Quin, and maybe not knowing she is Harley, but that’s interesting enough to seem warranted.

But that all said, don’t expect a show that’s going to do more than be entertaining. The four-part opener is great but come the first regular episode it devolves into funny hijinks and cartoon shenanigans, and I imagine that’s going to be the majority of the show.

Which isn’t a bad thing. If you have a child, especially a little girl, this is a great show to give them as an intro to superheroes.  It’s cool to see something that focuses on female superheroes, and in a way that’s very positive. It’s no Gravity Falls, Steven Universe, or Phineas and Ferb, but D.C. Super Hero Girls is “engagingly” paced, unique enough in its genre, and bubble gum fun enough to be worth taking a ten-minute break from reality. 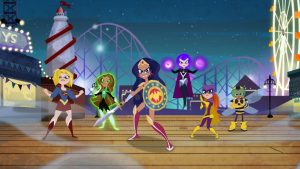