This is a guest piece written by author Collin Pearman. His novel, A Timeless Abandon, was reviewed by our site and is available online today. With that said, enjoy the article.

Minor spoilers below for The 100, season 2, and The Walking Dead, season 5.

I’ve been thinking a lot about the technology of today’s sci-fi.

That, and I’ve been watching TV. Ok, Netflix, whatever. Science fiction isn’t, in this writer’s humble opinion, an easily definable category. It shifts with as many perspectives as there are sci-fi readers, viewers, etc. And yet, in many (though not all) credible definitions of science fiction, sci-fi is different from other stories because the characters are directly, meaningfully impacted by changes and/or advances in science and technology that allow (or even force) those characters to live in a society that is markedly different from our own. That being said, what happens when events, so wide in scale, force those characters to live in the various worlds we now group together as the worlds of post-apocalyptic sci-fi?

For example, and really what this post is about, walls.

I know, not what I normally think about when I think about the technology of today’s sci-fi, either. It’s unusual. And yet, walls are technology, technology that becomes so vitally important in a world where order has been replaced by chaos. It’s the first thing we see in the second season of The 100 (a show worth watching for its imagination and character development, not necessarily the writing, less so the dialogue) after the Ark comes down. The very first thing? They build a wall. 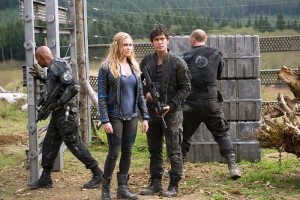 Why though? Why is this the first thing? To me, it’s an instant sign of people who are really putting in the time to think creatively. It’s realism in the midst of the fantastical. They could write in some new form of technology that erases the problems. But they don’t. The characters in the story use guns instead of phasers, they need to eat and sleep, and they need walls. Walls are also an important factor in season 5 of The Walking Dead, where Rick and crew find themselves amongst strangers in a town surrounded by, you guessed it, a wall. Not just to keep the walkers, dead heads, roamers (but never zombies), etc. out, but also to protect against people who’ve turned to savagery (I mean, other people who’ve turned to savagery, not Rick and crew. Them’s the protagonists. They get a pass). 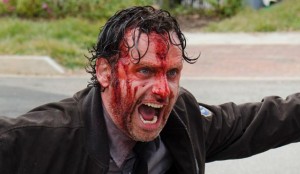 This makes me think about the psychology of walls. Because it does, ok? We build them to feel safe. A sense of control where there so clearly isn’t any. And yet, sometimes these walls lead to disastrous consequences. Again, both stories more or less fall under the sci-fi umbrella, and the characters within have to adapt to the implementation of technology. When walkers get in, those walls make characters feel more trapped than they already did when trying to fit in in a world where they no longer seem to belong. The same can be true for us, in a different way. Those who’ve experienced trauma often put up emotional walls to stop pain from coming in. A great blessing for those unfortunate enough to have experienced such pain. The problem is, those same walls can keep us prisoner when the pains from within us begin to claw their way out of the dirt. They can also make us blind to real dangers, and real joys, that lay outside those walls. 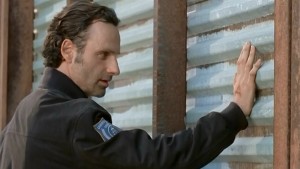 Both stories deal with the impossibility (or improbability, perhaps) of their overall settings well by having the characters put up walls to protect from both physical and emotional danger.

And they, like us, have to deal with the consequences brought on by the implementation of both the physical, and emotional, walls that both they, and we, so often put up when the world around us changes.